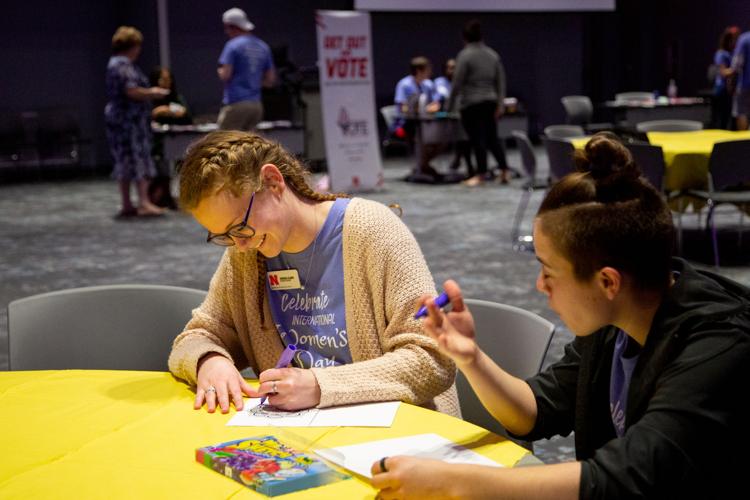 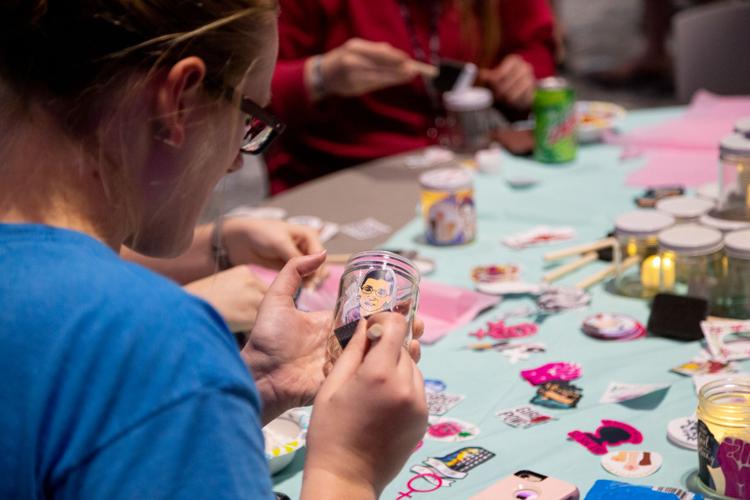 A woman works on her candle craft at the International Women’s Day celebration in the Red Cloud room at Willa Cather Dining Center on Wednesday, March 4, 2020, in Lincoln, Nebraska.

A woman works on her candle craft at the International Women’s Day celebration in the Red Cloud room at Willa Cather Dining Center on Wednesday, March 4, 2020, in Lincoln, Nebraska.

With a theme of female leadership, the University of Nebraska-Lincoln is hosting events to celebrate women’s history all month long.

The events are a way to honor Women’s History Month and give credit to women’s achievements and contributions to society, specifically in leadership roles. On Friday, there will be a conference with keynotes from female leaders called “Women Lead 2020: Claim Your Power.”

On Tuesday, there will be a showing of a documentary called “Girl Rising” and a smaller event in the Women’s Center conference room where students can make signs for the March 14th Women’s March.

On March 13, there will be a presentation hosted by the UNL History Graduate Students’ Association called “Who Was a Suffragist? A More Diverse View.” On March 17, there will be a “Lunch & Learn” with Patti Phillips, CEO of Women Leaders in College Sports, to discuss the obstacles female athletes face.

Desai said the event took place before International Women’s Day, which lands on a Sunday this year, so more people could come. Desai said the event had food, stickers with images of famous women, massages provided by Campus Recreation, voter registration and discussion about loving oneself and the importance of body image.

Desai said the event also highlighted women’s issues like the pink tax, which is when female products or services are priced higher than their male counterparts. To teach people about the pink tax, Desai and others set up an activity where students had to guess the prices of products like razors or deodorant. At the end, they gave these products out as prizes to students.

“[The pink tax] is something that needs to be spoken about,” Desai said. “When we talked to the students about the issues that women face, the pink tax came up a lot.”

Wolinski said despite the many events in honor of Women’s History month going on at UNL, there is still a desire to do more.

“I don’t think we do enough,” she said. “I think we need more intersectionality and diversity in general. We need to work to highlight more women of different backgrounds.”

A new addition to the month-long celebration this year is a Professional Development series hosted by the Women’s Center. There are a few different events in the series, which focus on  leadership, self-care, time management and anxiety, Le and Wolinski said.

“It’s for building our students up so that they can be productive members of society, but also so they can care for themselves at the same time,” Wolinski said.

Desai, Le and Wolinski said it’s important for UNL to have events in honor of Women’s History Month to celebrate women and their accomplishments from the past to the present. Wolinski said it’s to acknowledge the strides women have made, specifically women in Nebraska, like female leaders on campus.

“It’s recognizing the strides women have made, but also recognizing that we have a long way to go,” Le said. “It’s not just a women's issue, it’s a societal issue.”

Desai said the events are a way to embrace the identities of women but should be treated as a way for people to come together. One of the goals of the events is to inspire the current generation to carry on the history of female figures and the strides that were made in the name of gender equality, he said.

Desai, Le and Wolinski said the month is also a fun way to bring social and cultural issues to the forefront.

Le and Wolinski said the events are a way to give credit to and celebrate the women whom history has forgotten or didn’t pay much attention to.

“I think social change is very slow. I don’t think we’re anywhere near where we don’t need a month,” Wolinski said. “But just for people to recognize women’s history and understand and celebrate it is a good step in itself.”