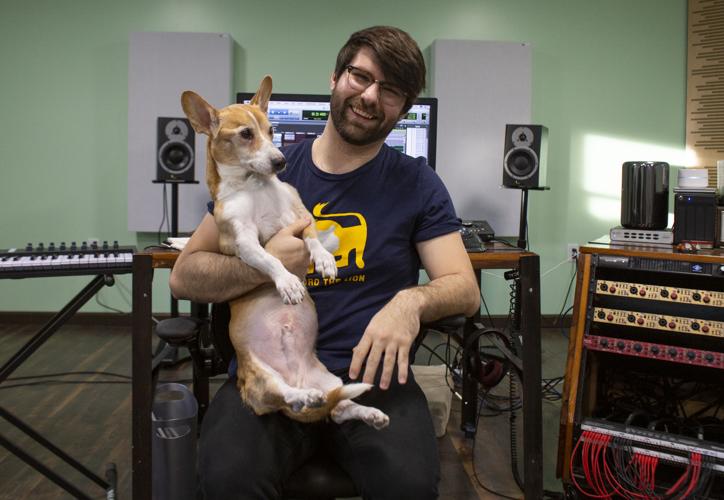 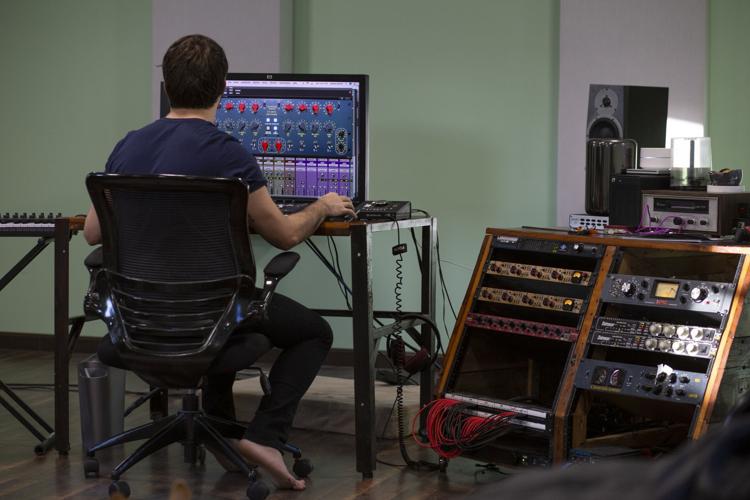 Editor’s note: Senior culture editor Sam Crisler is a member of Death Cow and did not contribute to the writing of this story.

Crammed into an unassuming Lincoln suburb sits a garage filled with tools. One won’t find the usual saws or hammers here, but rather the tools of an expert rock and roller.

Bass drums, guitars, stacks of amplifiers and microphone cables hang like wallpaper around the bright teal walls and engulf a huge desk sitting in the middle of the room.

Perched in between a pair of studio monitors sits Jeremy Wurst, self-made music producer and the man behind Coyote Face Recording. Always close by is his trusty canine sidekick, Roger, an arthritic corgi with a penchant for devouring massive amounts of condiments.

While Roger is known for eating an entire bottle of ranch in one sitting, Wurst has made a name for himself working with countless local bands and artists to create a hefty portfolio of records, EPs and singles.

Wurst is a music producer, engineer and mixer, meaning he works with bands and artists from the moment they plan to record until they’re dancing around the room listening to the final product.

After a recent backyard garage remodel toward the end of 2018, he traded in his freelancing past to set up shop in his own dedicated workspace. Dubbed “The Coyote Room,” his studio boasts a state-of-the-art recording setup waiting to capture the sounds of any artist who walks in.

The key component, however, lies within Wurst.

His producing style and diverse skill set add professional quality and creative additions to any project he works on. Whether it is his early work with blues-roots outfit Root Marm Chicken Farm Jug Band or his latest recordings like surf rockers Orca Welles’ debut full-length album, Wurst uses his mash-up of styles to execute the artist’s vision.

“I’m sort of this weird middle ground between hi-fi, clean, what’s loud and on the radio and super gnarly lo-fi, sticking mics in trash cans,” he said.

Without a decent work ethic, talent and style won’t ever bring anything to fruition. Wurst knows this firsthand, as his full-time self-employment in the music industry requires a fire in the belly and a constant drive to improve.

Luckily, Wurst bursts with the passion that keeps bands coming to him to record.

“Your name is your reputation, and your business card and everything else,” he said. “If you make great records and care a lot about the work that you do, whenever people think recording, they’re gonna think Jeremy.”

Even though he only recently began work in his own studio space, Wurst has been working in the recording game full-time since 2015. Since then, Wurst has continuously worked to make each record better than the last.

Mari Crisler, a junior psychology major at the University of Nebraska-Lincoln, has become a regular at Coyote Face Recording. She has worked with Wurst to record a pair of EPs and a pair of albums with her bands The Way Out and Death Cow, and she plans to stop in again in April to record a third album with her band Uh Oh. She’s seen into the mind of Wurst more than most and has found his paternal-leaning techniques worth coming back for.

“He’s totally like a dad,” she said. “He’s fun and goofy, but he can also buckle down and get you to do what he needs you to do.”

Wurst’s love for music traces its genesis to the snare drum in his fourth-grade band. His mother deemed a drum kit too loud for the Lincoln household he grew up in and gifted young Jeremy an electric guitar instead.

After a while of starting and stopping on the frets, Wurst’s love for guitar finally clicked when he started to learn the catchy — and more importantly — simple tunes of Blink-182. From there, his musical fervor compounded to playing in bands in high school and eventually buying a two-channel interface from a Dietze Music store to help with his songwriting.

Wurst used this simple piece of equipment to start making demos for his bands, and in doing so got himself addicted to the process.

That snowball sparked an avalanche of recording practice that eventually engrossed Wurst’s life. After graduating from UNL with a degree in classics and religious studies, Wurst worked odd jobs loosely pertaining to audio production under the impression that a full-time career in recording was unfeasible.

“I was at my day job and literally all I was doing was reading about recording,” he said. “I would sit there all day and then go home and actually experiment with stuff.”

But to Wurst, his jams couldn’t live in the background. He had a insatiable drive to rock, and wouldn’t rest until he could do it around the clock.

“What I really wanted to do was music. Record or write or play or whatever.”

One of Wurst’s key techniques in learning the ways of producing is simply picking the minds of other professionals. One such expert is Don Gunn, a Seattle-based producer who’s worked with the likes of Death Cab for Cutie and Soundgarden. After sparking an internet friendship over recording questions and taking a serendipitous trip to Washington, Wurst was contacted by Gunn with a dinner invitation.

One might expect such a high-profile producer to live outside the norm, but much to Wurst’s surprise, he found no lavish house or huge studio. What he found was modest — and within Wurst’s reach.

“In a weird way, it was life-changing. I was like, ‘Holy s***, I can do this. This is completely tangible as long as I’m not an asshole about it,’” he said. “This is completely doable if I just work really hard.”

With a new lease on the recording lifestyle, Wurst and his wife, Casey, moved to Sacramento, California, to pursue work with bigger studios. After working a few solid studio jobs, sharpening his skills and developing a nostalgia for farm-to-table dining, Wurst decided California may not be the best option to set up his dream personal studio. Unreasonably high prices and tough property markets made the choice clear.

“It was really obvious that California just wasn’t going to work out. We didn’t want people to think that we failed; we just figured out what we needed to do,” he said. “California's cool, but maybe a little overrated. Sorry.”

So Wurst moved back to Lincoln, and after a long house search, he stumbled upon the property that would soon birth the Coyote Den.

The work didn’t end after finding the spot, however. Wurst labored on the studio all by himself, turning the dingy old carpentry garage into a sleek space capable of carving out the future he was after.

For Wurst, Lincoln made the perfect locale for a fresh, emerging producer like himself. He said the city’s music scene is pushing the bar unlike anywhere else in Nebraska. Even after considering setting up in Omaha, Wurst decided the capital is where it’s at. Citing bands like Histrionic, which recently released its debut EP that Wurst recorded, Wurst stresses that Lincoln hosts a horde of young and exciting talent.

“All of these new waves of young bands, they’re so good and they work so hard,” he said.

Crisler maintained that Wurst plays a part in the blossoming scene.

“He makes it so people have the ability to put out good quality music,” she said. “A lot of bands just put out demos or pay $5,000 to make an album, but he makes it cheaper and easier to make a really good album.”

Bands outside of the Lincoln scene and even Nebraska have started to notice the substantial effect Wurst has on the music he produces. A long-standing goal of his has been to work with bigger, out-of-state bands. For the entire month of February, this comes true.

Tigerwine, a grungy, post-hardcore band out of Colorado Springs that has found its way into the higher ranks of up-and-coming punk bands, is moving in with Wurst to record its new full-length album.

“I really think this is going to be an amazing record,” he said. “I’m trying to not overhype it in my head, but they’re super nice people and amazing songwriters.”

While working with Tigerwine is yet another goal marked completed, Wurst’s vision for the future has no boundaries in scope. He said wants to fill the “weird, gaping hole” of music producers in the Midwest and become a stopping point for bands who too often skip right over the middle of the country. To do that, though, requires hard work, tenacity and a great deal of flair.

“It doesn’t matter where you are, it matters what you’re doing,” he said. “No one famous got anywhere from being boring.”

This article was originally published in the March 2019 edition of The DN.