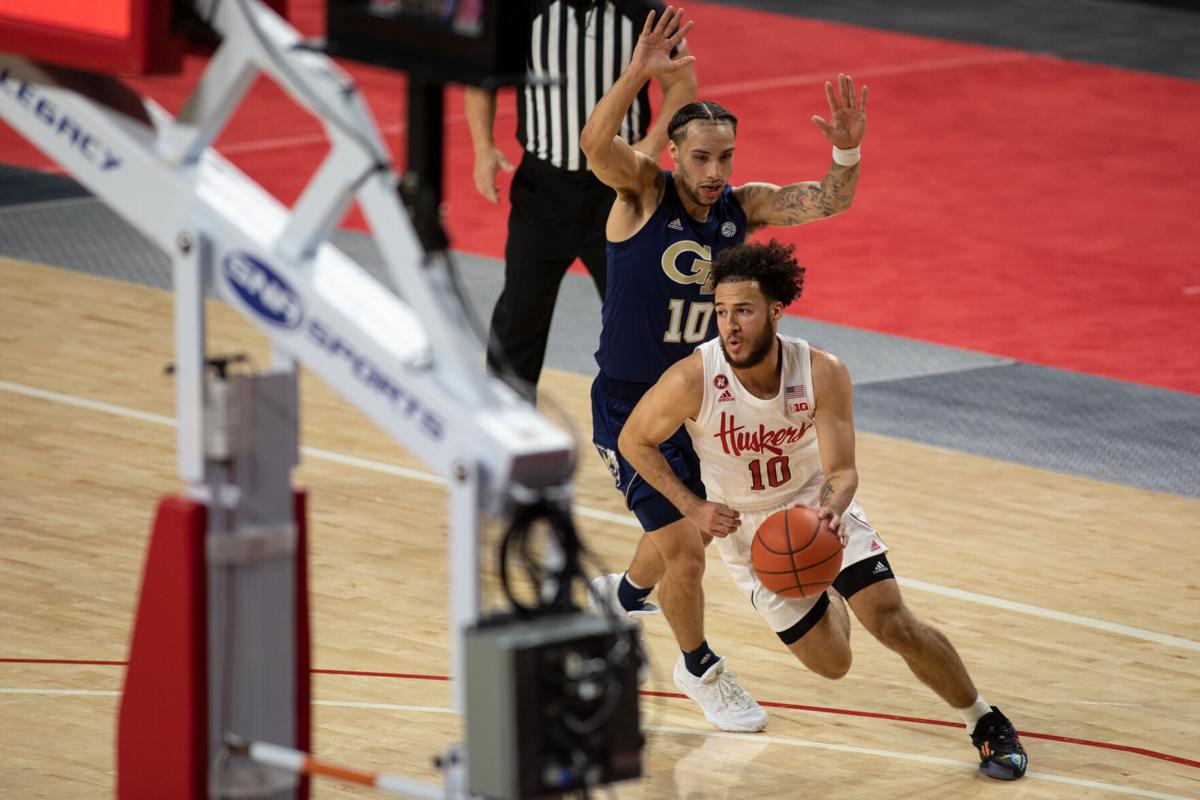 Nebraska's Kobe Webster (white) drives toward the hoop against Georgia Tech's Jose Alvarado during the game at Pinnacle Bank Arena on Wednesday, Dec. 9, 2020, in Lincoln, Nebraska. 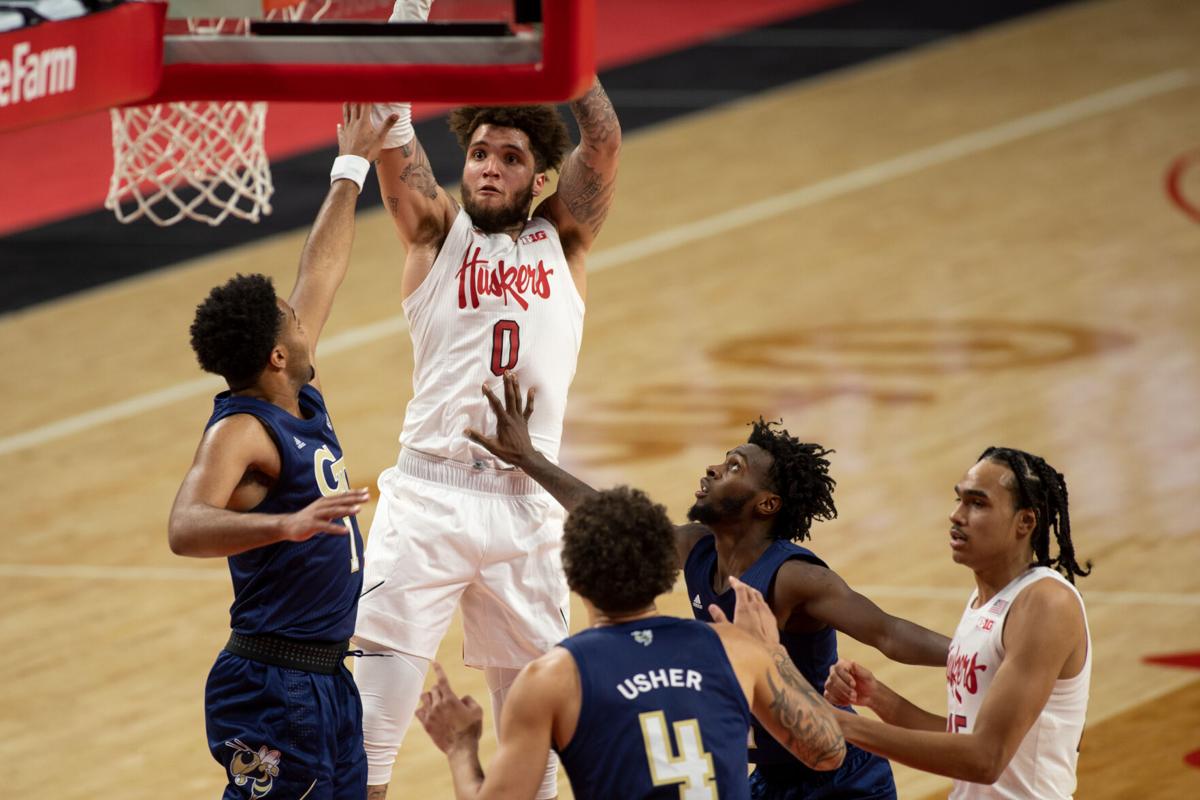 Nebraska's Teddy Allen (0) goes up for a shot during the game against Georgia Tech at Pinnacle Bank Arena on Wednesday, Dec. 9, 2020, in Lincoln, Nebraska.

Nebraska's Kobe Webster (white) drives toward the hoop against Georgia Tech's Jose Alvarado during the game at Pinnacle Bank Arena on Wednesday, Dec. 9, 2020, in Lincoln, Nebraska.

Nebraska's Teddy Allen (0) goes up for a shot during the game against Georgia Tech at Pinnacle Bank Arena on Wednesday, Dec. 9, 2020, in Lincoln, Nebraska.

It looked so good for so long. Not because Nebraska was necessarily doing all that well, but precisely because it looked only just about alright. For most teams in basketball, it’s impossible to win every game with aplomb. With seven minutes left in the second half, Nebraska was looking to bring the game to a close finale, perhaps with a chance to win.

That changed quickly. Georgia Tech senior guard Jose Alvarado, who finished the game with 24 points, started the Yellow Jackets’ 24-13 run to end the game. Georgia Tech, for the second time in as many years, beat the Huskers by double digits.

After the game, with the only lights at Pinnacle Bank Arena illuminating the court, junior guards Trey McGowens and Teddy Allen practiced at opposite baskets. In front of rows of cut-out fans, Allen put up shots. Then more shots. Then, most likely out of frustration, or perhaps anger, he yelled into the vast expanse of the arena.

That anger was not exclusive to Allen. Despite hanging with Georgia Tech for more than three quarters of the game, the Huskers fell apart down the stretch and suffered another ignominious defeat. Of course, there are positives, but the somber tone of the game could’ve been so much more.

Here’s three takeaways from the game:

Nebraska has improved, but there are new problems

It shouldn’t go unmentioned that tonight’s loss, as bitter as it proved to be, was significantly improved from last year’s loss to Georgia Tech. In almost all areas of play on the box score and beyond, the Huskers appear to have played better.

Nebraska shot better from inside the arc, outside the arc and from the charity stripe. It allowed less offensive rebounds from Georgia Tech, gave up less 3-pointers and in all, the Huskers played better. The score reflects this, up to 75-64 from the 73-56 result last year.

However, Georgia Tech revealed fundamental flaws in both the Huskers’ offense and defense.

First, the offense. One of Nebraska’s strengths heading into the matchup against Georgia Tech was its free throw output. In truth, the Huskers haven’t necessarily shot the ball all that well this year. Nebraska ranks, for example, 222nd so far in 3-point field goal percentage despite 3-pointers making up 47.1% of its diet.

However, much of this was remedied by a great free throw rate, which currently stands at 61st in the nation. On a competent 67.9% conversion of these free throws, the Huskers had a way to supplement their scoring even when the ball wasn’t going through the hoop.

This, unfortunately for the Huskers, dried up against a recalcitrant Georgia Tech squad. The Huskers only managed to shoot 15 free throws against the Yellow Jackets, by far their lowest mark all season. Without decent free-throw production, the rather poor shooting from the field will not be hidden and instead the Huskers will be left exposed like they were against Georgia Tech.

Pinpointing why a team does or doesn’t draw fouls is hard to square, but at least in the case of Georgia Tech it could be an aberrant occurrence. One key correlative for how well a team draws fouls is how well it can drive in the lane, and Nebraska did just fine with that on Wednesday night. Perhaps it simply is a debut for what the referees will look like when going up against higher-tier opponents, where leeway is harder to come by.

Through four games, one common defensive trend emerged: the Huskers’ 2-point field goal defense was significantly improved. Given the team’s immense turnover rate improvement, a small carryover from last year, and furthermore added length, this seemed to be reasonable. Even if their rates through the first four games couldn’t be upheld, it seemed reasonable that the Huskers’ 2-point defense had improved considerably.

However, Georgia Tech indicated a reality that is not preferable to Nebraska fans, namely that the first four games were a mirage. While it behooves no-one to make sweeping claims off the back of singular data points, Nebraska’s 2-point defense against Georgia Tech should raise red flags for the coming weeks.

Georgia Tech shot 54.5% from inside the arc on the night. This is better than last year, where Georgia Tech only shot 54%. While this is rather marginal, it’s notable that Nebraska’s defense last year was a horrific 293rd in the nation according to kenpom.com.

A large reason for Nebraska’s woes on the defensive end was its lack of steal production on the night. Despite holding the ninth highest steal percentage in the nation, against Georgia Tech Nebraska was only able to accrue three. Much of the engine of Nebraska’s 2-point field goal production comes from these steals and their absence was felt in the game.

The players responsible for Georgia Tech’s run were Alvarado and junior guard Michael Devoe. Devoe only played 23 minutes in the game, and 19 of those came in the first half, however his drives into the paint exploited a key weakness for the Huskers. While one would expect the bulk of 2-point field goal production to come from forwards and centers, Nebraska appeared uniquely susceptible to guards driving into the paint throughout the game.

One possible reason for this is Nebraska’s newfound size. Last season, Nebraska’s tallest player was now-sophomore forward Yvan Ouedraogo at 6-foot-9. Now, however, with the addition of sophomore guard Dalano Banton and junior forward Shamiel Stevenson into the lineup, Nebraska is significantly taller.

At several points, these taller players, Banton especially, were forced to switch onto shorter guards. Alvarado in particular was able to exploit the size disadvantage by drawing players out into open space and attacking holes left open after the fact.

Thankfully for the Huskers, the Big Ten is not a guard-heavy league, so this weakness may be minimized due to opponent quality. However against Creighton on Friday with junior guard Marcus Zegarowski lurking, things could get ugly.

Senior guard Kobe Webster has been relatively quiet at points this season, playing his best when the team was already probably going to win, but the Western Illinois transfer showed his incredible 3-point scoring touch to help keep Nebraska in the game.

Webster’s contribution was felt throughout the game, scoring nine points in the first half and 11 in the second. However, a span in the second half where he made three straight 3-point shots in the span of four minutes should be especially commended. The Huskers started this period with a three point lead, however Georgia Tech found some of its scoring ability and matched Nebraska completely. Were it not for Webster’s contribution, the lead the Huskers had built up would’ve evaporated far quicker.

Allen has proven to be one of Nebraska’s most important players so far this season, and while he ended up having a disappointing night, his performance to start the second half ought to be commended as well. Allen was instrumental in both gaining and building a lead for the Huskers to start the second half, and showed a lot of his quality in this limited time period.

Allen continued on a trend he’s carried since the game against North Dakota State, where he starts the first half incredibly slow and emerges in the second. Against NDSU, this meant going a quiet 2-of-4 in the first half for five points, only to then score 17 on 7-of-13 shooting in the next.

His contribution against Georgia Tech was a little less spectacular, however it was no less important in securing the Huskers’ lead before the collapse. At the end of the first half, with the Huskers down 32-30, the energy was tangibly low at Pinnacle Bank Arena.

However, Allen came out firing in the second half, and quickly scored eight of Nebraska’s first 10 points of the period. This turned a 32-30 deficit into a 40-34 lead, and very nearly set up the Huskers for a late game stand, were it not for the collapse.