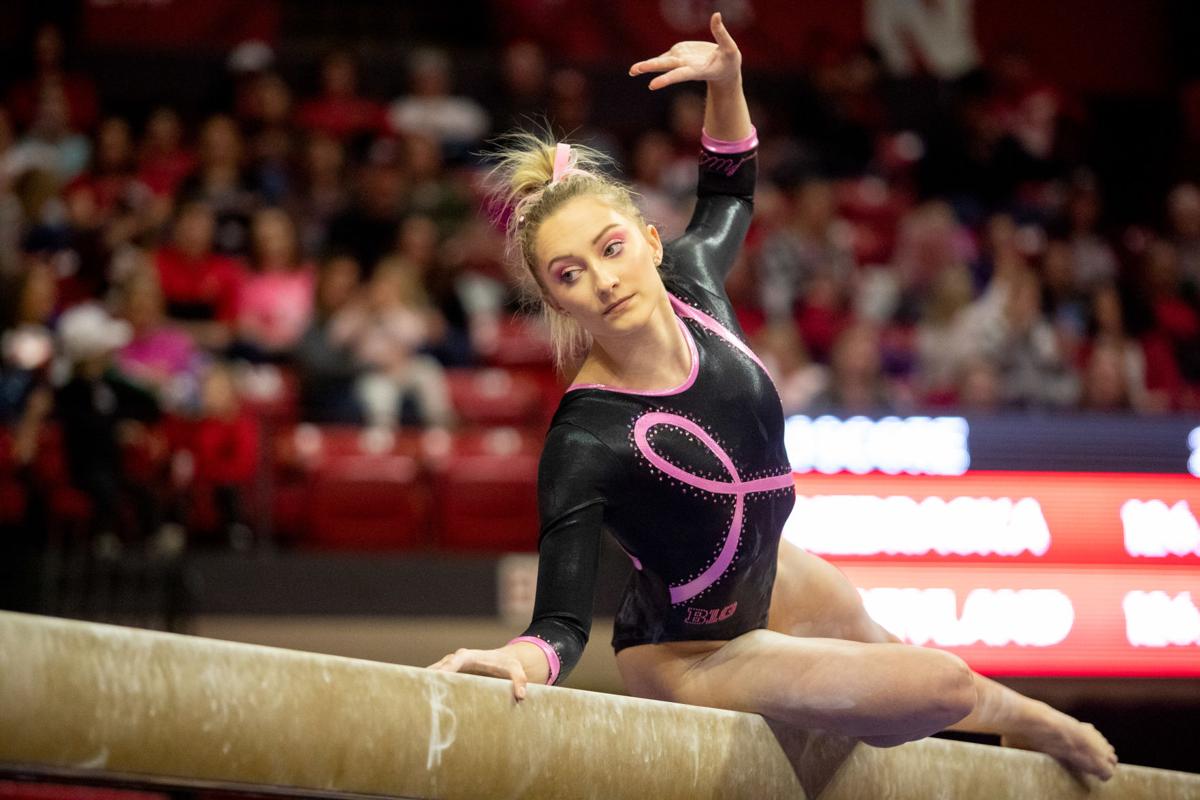 Nebraska’s Taylor Houchin performs on the beam during the meet against Maryland at the Bob Devaney Sports Center on Saturday, Feb. 8, 2020, in Lincoln, Nebraska. 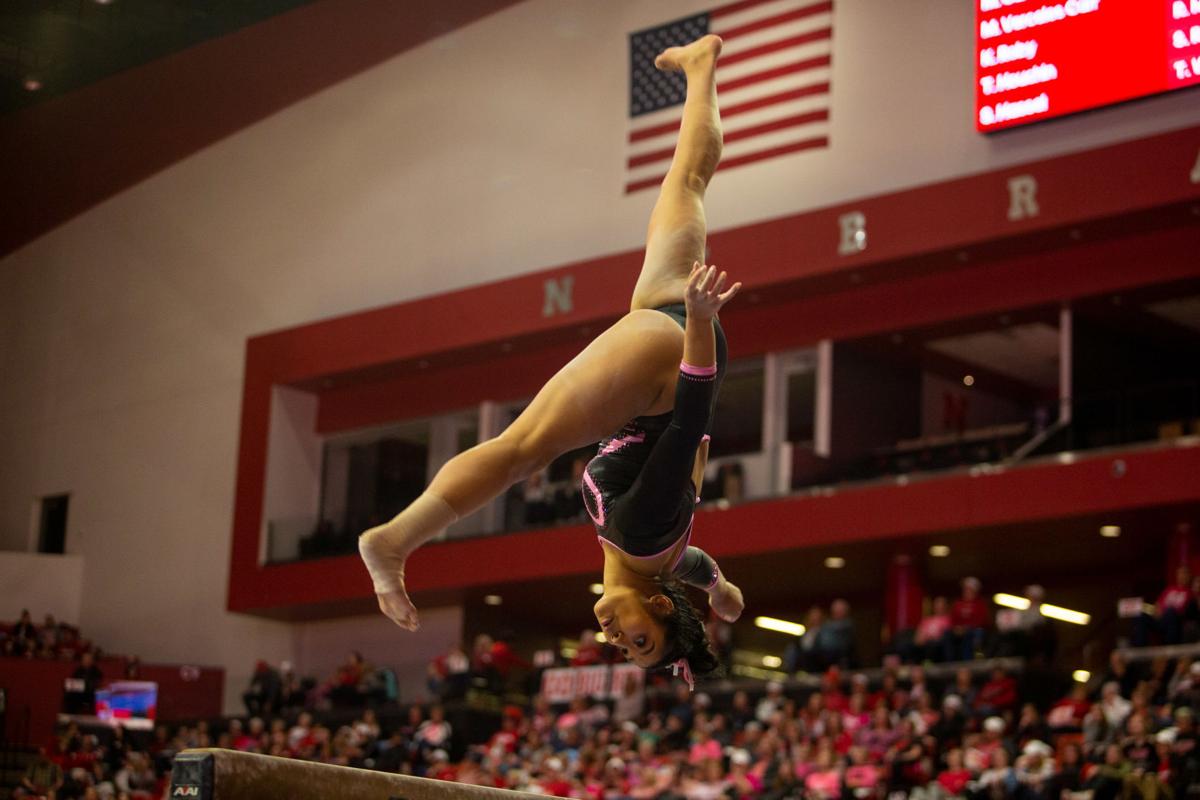 Megan Verceles Carr performs her routine on the beam during the meet against Maryland at the Bob Devaney Sports Center on Saturday, Feb. 8, 2020, in Lincoln, Nebraska.

Nebraska’s Taylor Houchin performs on the beam during the meet against Maryland at the Bob Devaney Sports Center on Saturday, Feb. 8, 2020, in Lincoln, Nebraska.

Megan Verceles Carr performs her routine on the beam during the meet against Maryland at the Bob Devaney Sports Center on Saturday, Feb. 8, 2020, in Lincoln, Nebraska.

The Nebraska women’s gymnastics team jumped out to a lead after one rotation against Maryland and cruised the rest of the way in a 196.175-193.525 win on Saturday night at the Bob Devaney Sports Center.

The meet was the team’s annual “pink meet” for breast cancer awareness. Those kinds of meets mean a little bit more than the average meet, according to senior Taylor Houchin.

“Any time you can do what you love for a reason, for a purpose bigger than yourself, it’s more rewarding for everybody involved,” she said. “We get to honor great people like the breast cancer survivors we had tonight at the meet. It was great to see them here, and it just makes you feel grateful.”

With the win, the Huskers bounced back from a tough loss against Michigan on Jan. 30 and improved to 4-2 on the season.

“We just have had a really good week of practice, so I didn’t expect anything different from them,” head coach Heather Brink said. “Just hit routine after hit routine, so now it’s getting down to the nitty gritty details.”

The Huskers opened on vault, where they posted a score of 49.05. Houchin led the team in the opening rotation, as she posted a 9.9 to win the event. Junior Megan Verceles Carr and sophomore Adnerys De Jesus both scored better than a 9.8, while freshman Kylie Piringer and junior Makayla Curtis both scored at least a 9.7.

Curtis said she’s focused on improving her performance on vault in practice.

“Being last, it sets me up that I just have to go out and do my job,” she said. “I think I did that. The five girls ahead of me set me up for that, so I just had to go out there and do what I needed to do. I can always improve a little bit, but it was nice that I got to get back out there.”

While the Huskers got off to a fast start in the first rotation, the Terrapins sputtered out of the gate. On the uneven bars, an event they ranked inside the top 10 in nationally, they posted what was easily their worst score on the event this season with a 48.075.

Sophomore Sanya Glauber recorded a 9.8 to lead Maryland in the opening rotation. However, just two other Terrapins scored above a 9.7, while three scored a 9.5 or worse.

The Huskers led by nearly a full point going into the second rotation, where they competed on the uneven bars.

De Jesus scored a 9.85 and won the event, while Houchin and Verceles Carr both scored a 9.825. Freshman Clara Colombo followed with a 9.7 and freshman Kathryn Thaler added a 9.65. Piringer rounded out the Husker lineup with a 9.625.

Maryland closed the gap slightly in the second rotation, as it posted a 48.9 on vault. Three Terrapins recorded a 9.8 or higher, while two more scored a 9.725.

NU extended its lead in the third rotation, where it scored a 49.0 on the balance beam. Houchin posted a season-high 9.85 to win the event, while senior Sierra Hassel scored a 9.825 and junior Kynsee Roby followed with a season-high 9.8. Verceles Carr added a 9.775 and De Jesus scored a 9.75.Curtis also scored a 9.2.

Maryland competed on the floor exercise in the third rotation, where it recorded a 48.725. Junior Sabriyya Rouse led with a score of 9.85, while two Terrapins scored above a 9.7 and two more added a 9.675.

“[I’m] just extremely proud of them and the fight they have in them, the heart,” Brink said. “The message we talked about at the beginning was having a purpose of competing for something bigger than yourself. It doesn’t always come down to the individual stats or scores. Ultimately it comes down to elevating the team by pulling together and competing for a purpose.”

De Jesus and Houchin swept the event titles, as De Jesus won the titles for the floor exercise and uneven bars and Houchin won the vault, balance beam and all-around titles.

Houchin, who has a grandmother that’s a breast cancer survivor and lost three grandparents to different forms of the disease, said she used them for motivation today.

“Tonight I just had them in my mind and I tried to keep them in spirit and listen to what they would have told me, which was to be calm and be myself,” she said.

For Curtis, who lost her father to cancer in 2010, the team’s annual pink meet carries more meaning than most meets.

“To be able to give back to him and to give back to other people in his position, who have gone through the same thing and do what he did, we just want to go out and have fun and do it for them.” she said. “This meet is for them, everything’s for them and to know that we put it on and we can do that for them, it means so much.”