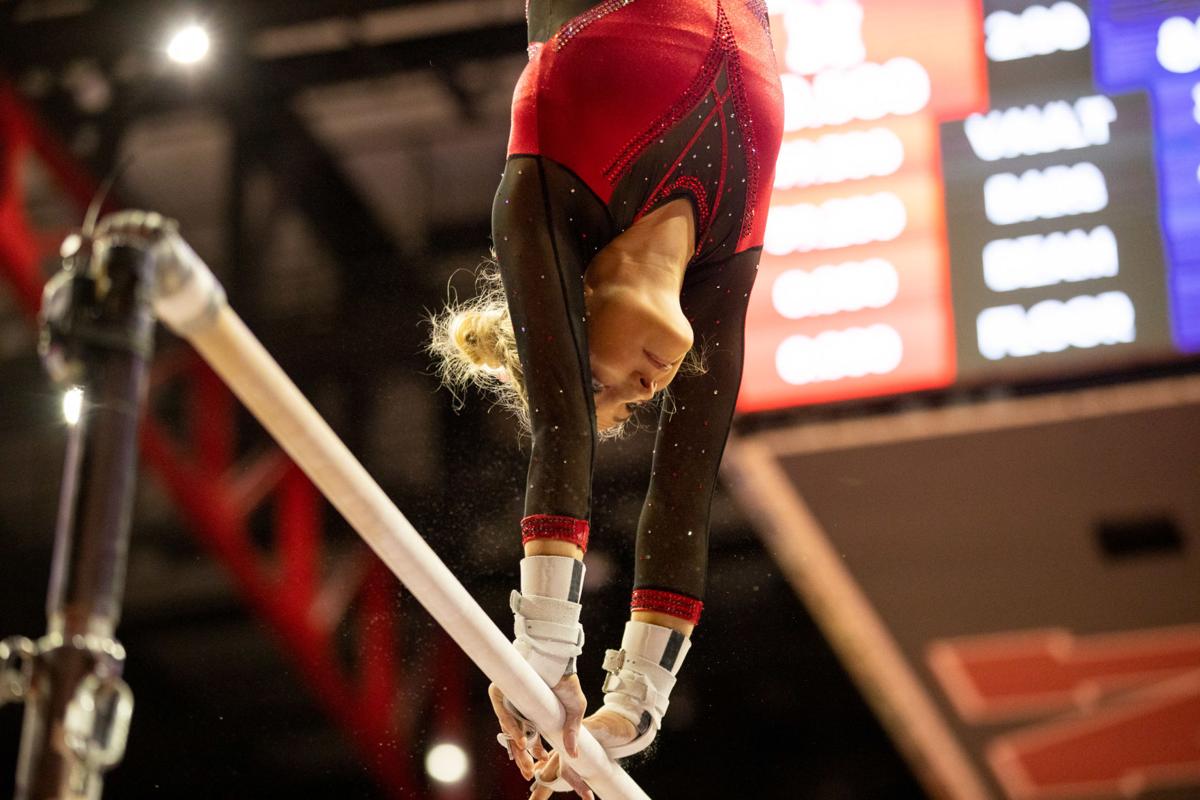 Taylor Houchin flips through the air while performing her bar routine during the Huskers’ meet against Michigan at the Bob Devaney Sports Center on Thursday, Jan. 30, 2020, in Lincoln, Nebraska. 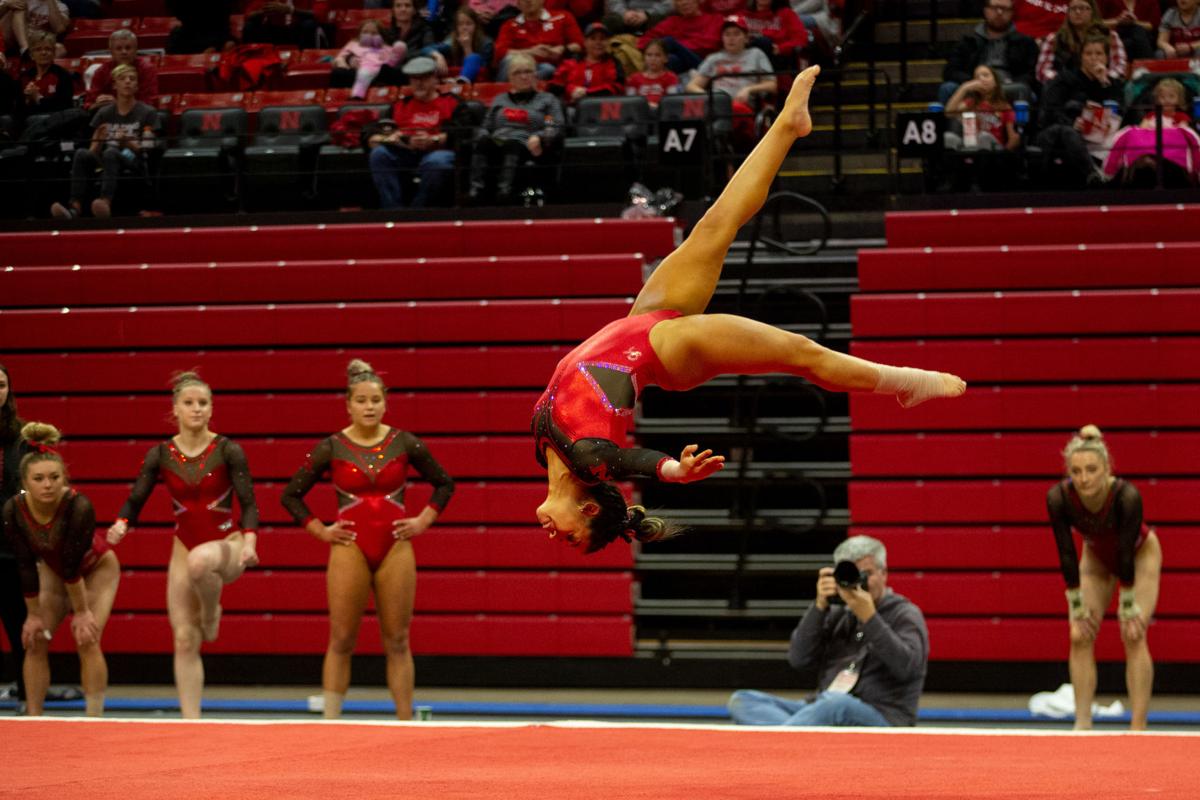 Adnerys De Jesus performs her floor routine during the meet against Michigan at the Bob Devaney Sports Center on Thursday, Jan. 30, 2020, in Lincoln, Nebraska.

Taylor Houchin flips through the air while performing her bar routine during the Huskers’ meet against Michigan at the Bob Devaney Sports Center on Thursday, Jan. 30, 2020, in Lincoln, Nebraska.

Adnerys De Jesus performs her floor routine during the meet against Michigan at the Bob Devaney Sports Center on Thursday, Jan. 30, 2020, in Lincoln, Nebraska.

In a top-25 showdown, No. 8 Michigan built a lead against the Nebraska women’s gymnastics team through three rotations and then held off a late rally in a 197.075-196.975 win on Thursday night.

“I think it’s great because it sets us up almost,” Nebraska sophomore Adnerys De Jesus said of the early-season test. “It makes us more hungry, honestly. I’m just glad that it was early on in the season and wasn’t one of those postseason meets where it really does matter.”

The Huskers opened on vault, where they posted a team score of 49.3. Senior Taylor Houchin led the Huskers in the opening rotation, as she tied for second with a score of 9.9. Junior Megan Verceles Carr and De Jesus followed, each with a score of 9.875, while freshman Kylie Piringer and junior Anika Dujakovich both tallied a 9.825.

The Wolverines opened the meet on the uneven bars, where they were led by sophomore Natalie Wojcik’s score of 9.875. Three other Michigan gymnasts recorded scores of 9.85 and a fourth scored a 9.8, as Michigan posted a team score of 49.225.

NU held a slight lead entering the second rotation, which it spent on the uneven bars. Houchin again led the Huskers, posting a score of 9.9 to win the event. De Jesus scored a 9.85 and Verceles Carr recorded a 9.825, while freshmen Clara Colombo and Kathryn Thaler followed with scores of 9.775 and 9.75, respectively.

Piringer rounded out the rotation with a score of 9.675.

Michigan competed on vault in the second rotation, where it posted a team score of 49.325 to take the lead. Sophomore Abby Brenner won the event with a score of 9.95, while freshman Sierra Brooks tied for second with a 9.9.

Verceles Carr and Houchin rounded out the Husker lineup with scores of 9.775 and 9.725, respectively.

“[It feels] absolutely amazing,” she said. “My teammates are great supporters. They’ve helped me with everything and being better in my head.”

Thaler said she focused on improving herself on the balance beam coming into the meet because it comes less naturally to her than uneven bars do.

“I think beam is more about nerves, more numbers and hitting every turn,” she said.

Michigan spent the third rotation on the floor exercise, where it extended its lead with a team score of 49.225. Five gymnasts recorded scores of 9.8 or better, highlighted by a 9.875 from both Brooks and freshman Gabby Wilson.

The Huskers staged a comeback in the final rotation, as they scored a 49.425 on the floor exercise. All six Huskers scored a 9.8 or better, while three recorded at least a 9.9.

Hassel claimed the event title with a score of 9.925, while Houchin recorded her third 9.9 score of the meet and Piringer tied her season high to match Houchin in a tie for second. De Jesus posted a score of 9.875, and Curtis and Dujakovich both scored a 9.825 to round out the rotation for the Huskers.

In the last rotation, Michigan recorded a team score of 49.3 on the balance beam to hold off the NU comeback bid. Three Wolverines scored a 9.875, while a fourth tallied a 9.85 and a fifth recorded a 9.825.

Michigan’s Brooks took home the all-around title, while Houchin finished second with a score of 39.425 and De Jesus finished third with a 39.4.

The Huskers’ rally may have fallen short, but there are still lessons to be taken from just competing in meets against challenging opponents like the eighth-ranked Wolverines.

“Every time we go out on the floor it’s more exposure and more experience, so these meets really help,” De Jesus said. “Whatever went wrong here, we can go back into the gym, fix it and come out stronger for the next meet.”