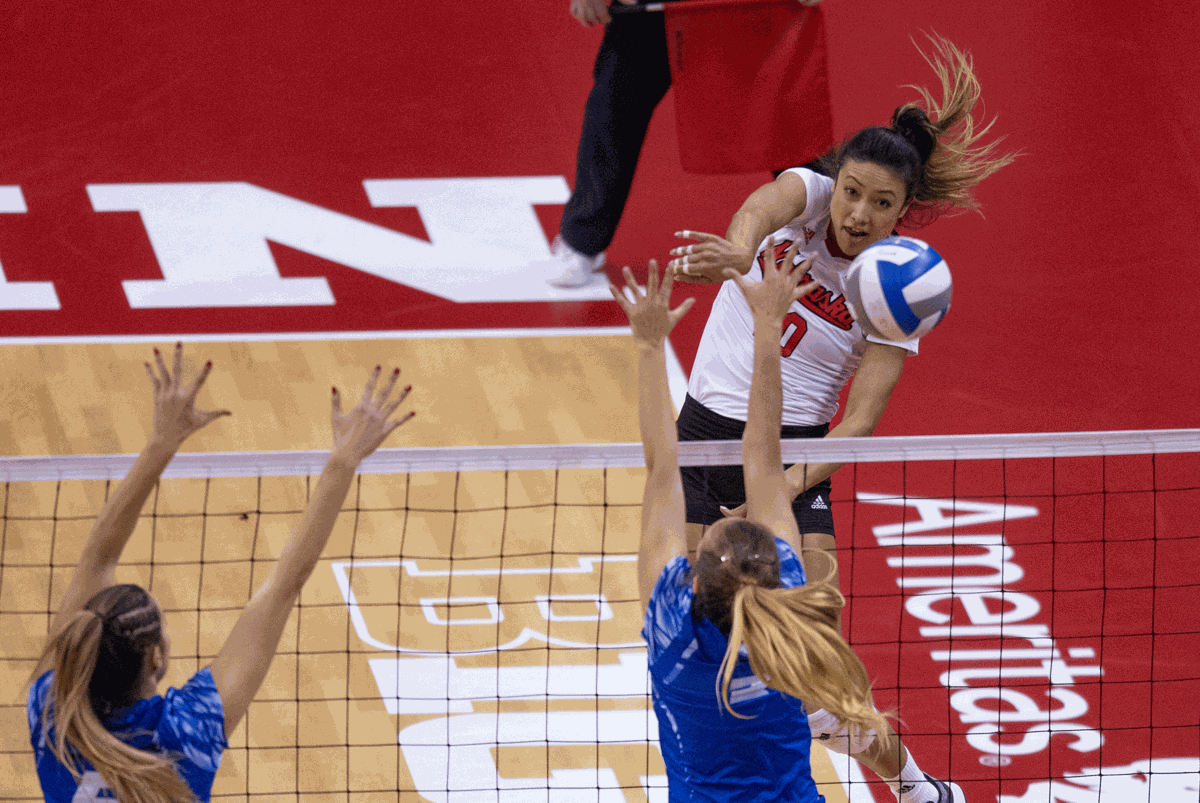 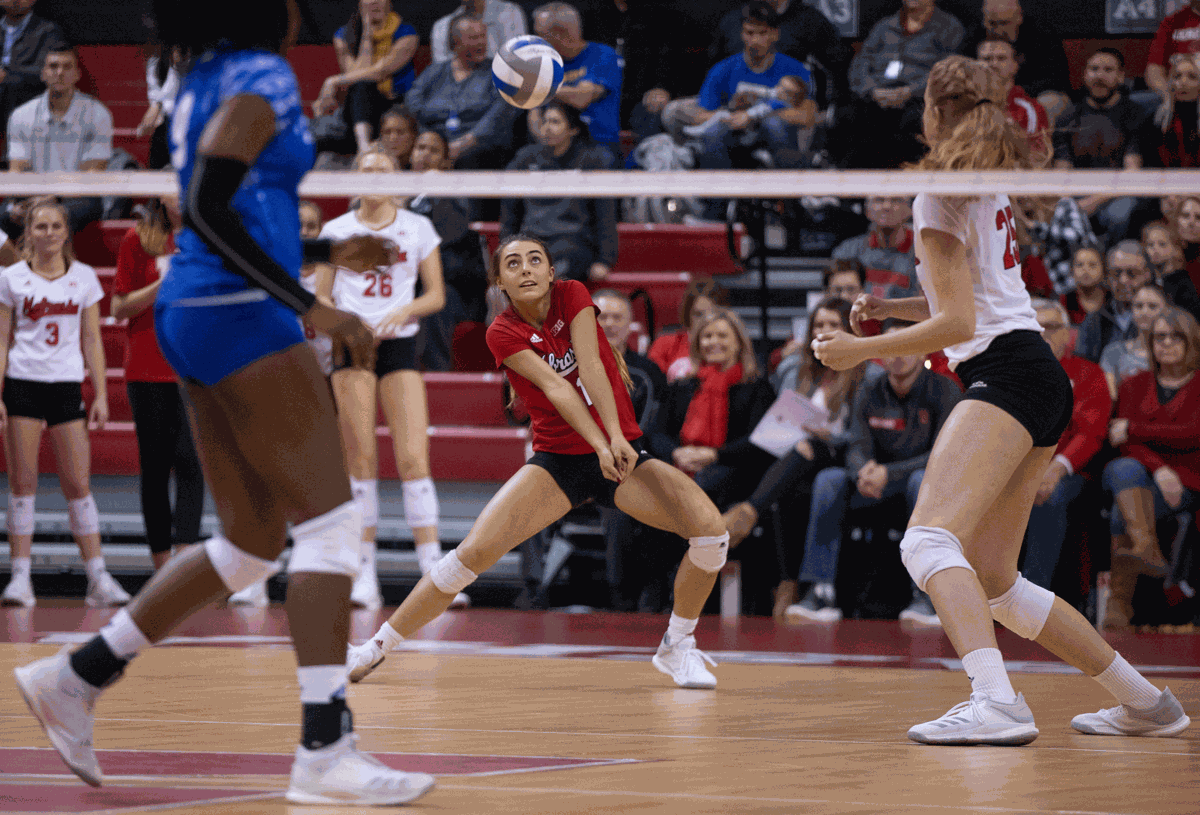 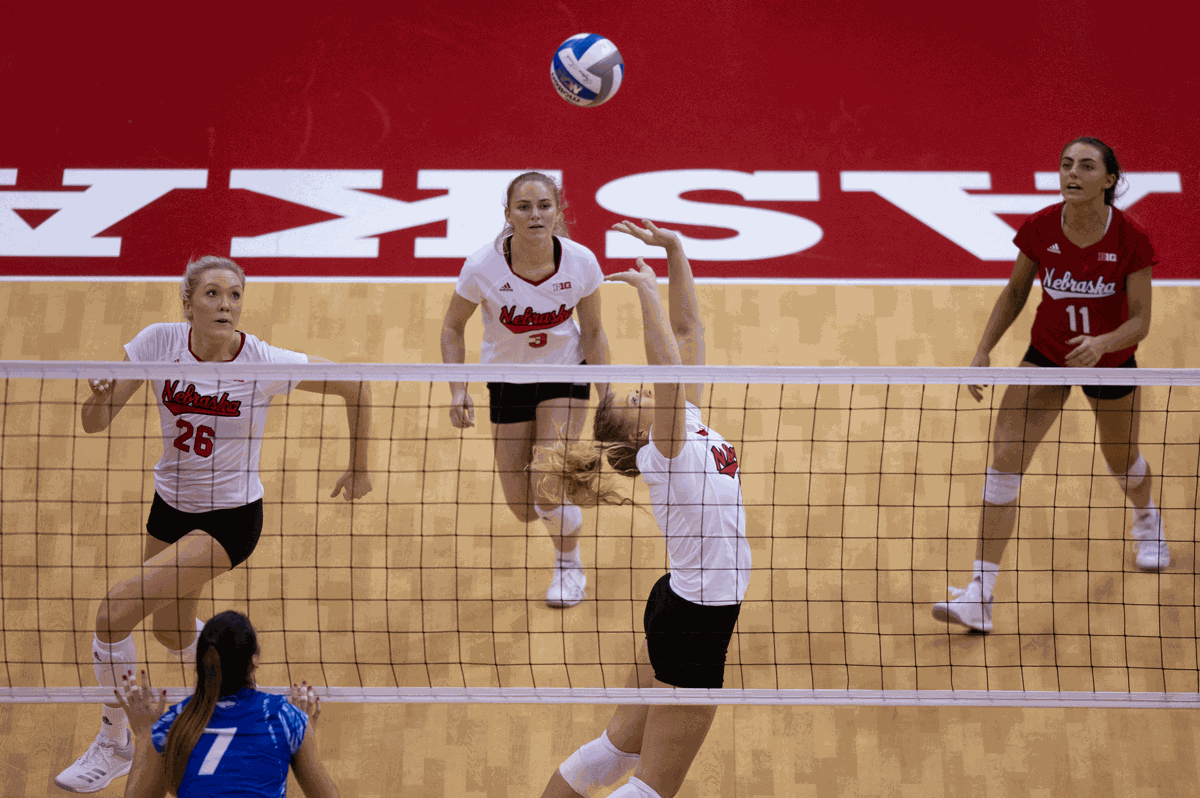 A match that began looking like a poor loss for the Huskers turned into a dominant performance as the No. 7 seed Nebraska swept Hofstra in in the first round of the NCAA Tournament.

While the Pride may have been the underdog in this match, head coach John Cook was thoroughly impressed by the game they played against Nebraska.

“They came to play and played fearless and did some really nice things,” Cook said. “They did some things against us that we prepared for and they still did it.”

Hofstra came out with fire in the first set. The team took every opportunity it could to top Nebraska. The Pride took an early 5-3 lead and while the Huskers came back to take the lead over at 7-6, Hofstra stuck with the Huskers for the first half of the set. Kills from outside hitter Lexi Sun, and middle blockers Callie Schwarzenbach and Lauren Stivrins pushed the Huskers’ lead to 14-12.  A block from outside hitter Mikaela Foecke and Stivrins brought the Huskers to 15-12 before a media timeout.

Sun added two points to the board with back-to-back kills finishing a 5-1 run for the Huskers at 21-15. Nebraska took its first timeout of the night after Hofstra went on a 3-0 surge to make it a three-point game at 21-18. Coming out of the timeout, Nebraska went on its own run with two kills from outside hitters Jazz Sweet and Sun, along with blocks from Foecke and Schwarzenbach. A service error from Sun sent the ball back over to Hofstra, but a service error from the Pride gave the first set to Nebraska 25-19.

Strong offense from Nebraska and silly errors from Hofstra gave Nebraska an early lead in the second set. The Huskers took the first two points of the set before allowing a kill from Hofstra’s Doris Bogoje, then Nebraska took off.

The Huskers went on an 11-2 run, prompting Hofstra to take a timeout at 13-3. Seven of those 11 points came from Hofstra errors.

Even after the timeout Nebraska was able to keep its distance with a 12-point lead at 23-11. Kills from Foecke, Stivrins, Sun and Sweet plus more errors from Hofstra gave the Huskers those last 10 points. Stivrins ended the set with two kills, with Nebraska taking the second set 25-12.

The third set began with Hofstra taking the first two points before Nebraska rallied and took the next three to take a 3-2 lead. Another few points for Nebraska forced a Hofstra timeout, with Nebraska leading 6-3.

Coming out of the break, Nebraska continued to keep their distance at 12-5 with kills from Foecke and Stivrins, and the first solo block of the game from Foecke.

Nebraska forced another timeout when leading 16-7 but Hofstra was losing steam to rally. The teams went 7-7 on points before Stivrins hit a kill to bring game to match point at 24-15. A long hit by Sun gave Hofstra one last point before a kill from Foecke ended the third set 25-16.

Sun praised Stivrins in the post-game press conference for her effort offensively as a middle blocker.

“She was crafty with her shots,” Sun said. “I think she is unlike any other middle. She gets up on every ball and she’s aggressive.”

Stivrins played an impressive offensive game in her role as middle blocker. She led the game with a new season high 12 kills and a .500 hitting percentage of the night. Foecke was close behind her with nine kills on the night and led the game in blocks with six total blocks.

The Huskers held the Hofstra Pride to a .132 hitting percentage and ended the game with nine team blocks. Nebraska was able to hit .352 as a team and held to nine hitting errors on the night.

Nebraska will take on the Missouri Tigers on Saturday, Dec. 1 at 7 p.m. in the second round of the NCAA tournament.