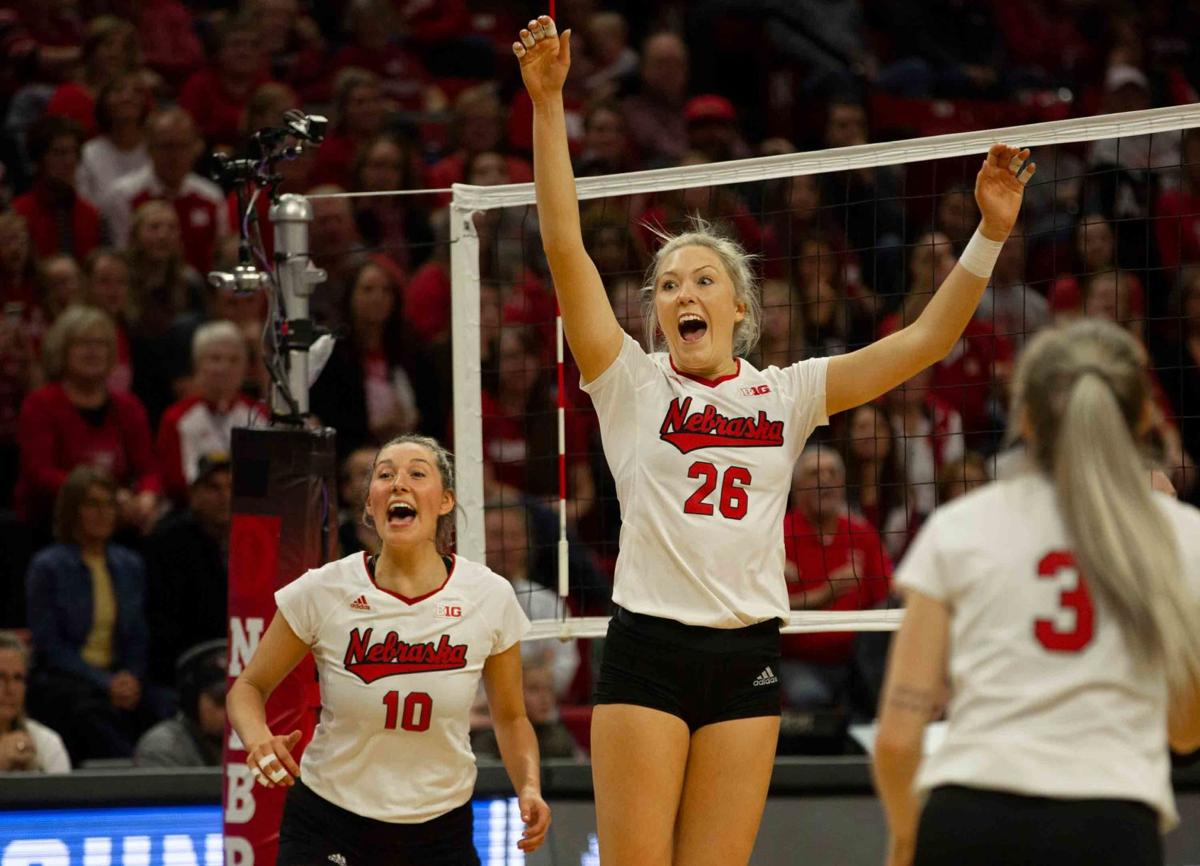 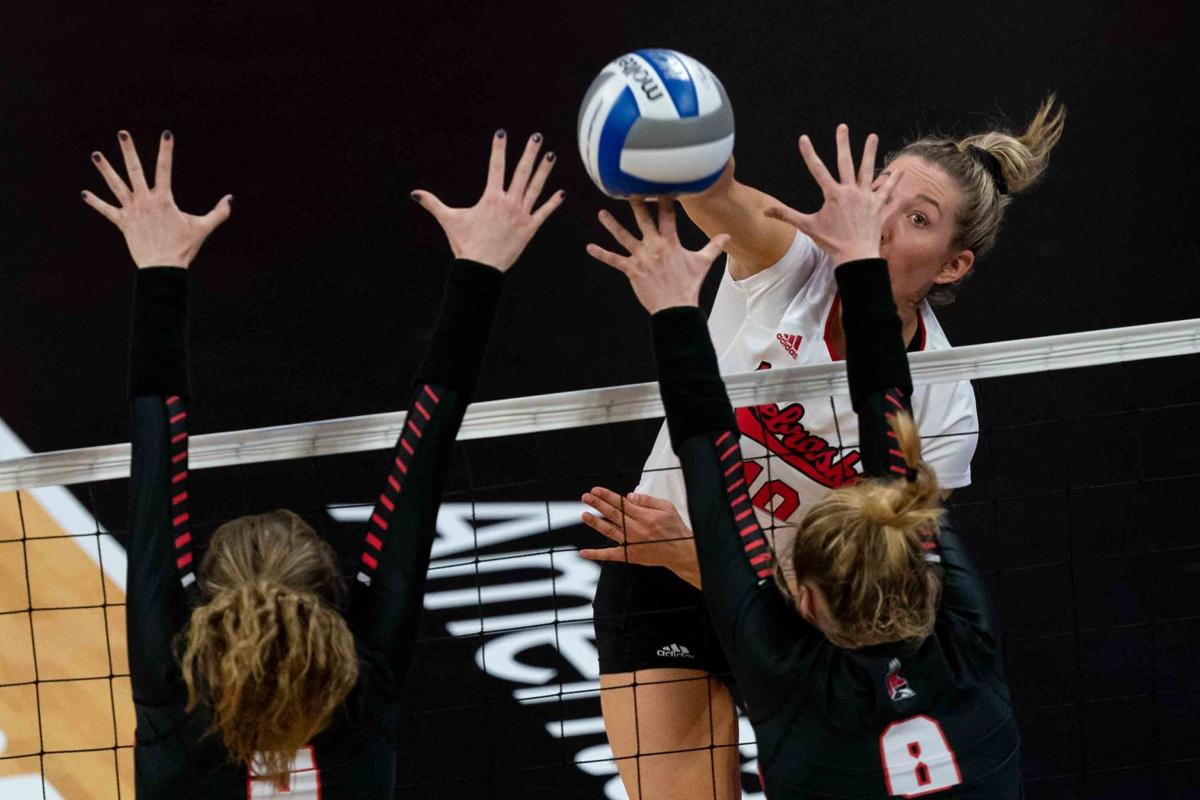 Nebraska’s Madi Kubik (10) spikes the ball during the Huskers’ match against Ball State at the Bob Devaney Sports Center on Friday, Dec. 6, 2019, in Lincoln, Nebraska.

Nebraska’s Madi Kubik (10) spikes the ball during the Huskers’ match against Ball State at the Bob Devaney Sports Center on Friday, Dec. 6, 2019, in Lincoln, Nebraska.

Barring a catastrophic upset, the first round match between Nebraska and Ball State trended towards a match that would just be a footnote of this season.

For Ball State, the inevitable was never in any of the players mindset. The players said after the match they had nothing to lose and that confidence allowed them to get some unexpected points.

“It’s awesome,” head coach Kelli Miller Phillips said. “This is what we have been working for, it’s being able to play in the NCAA Tournament and in an environment like this.”

The expected favorites, Nebraska started off sluggish in the first set. The nervousness and pressure of the postseason combined with a very young team saw the Huskers commit rookie-esque mistakes in the first couple of points.

After Ball State took a 3-2 lead, the rest of the set belonged to the Huskers and so did the match. Nebraska had eight total attack errors throughout the match while the Cardinals had 22 or almost eight errors per set.

The stark play by the offenses was the deciding factor as the first set saw Nebraska only have two errors. Sophomore middle blocker Callie Schwarzenbach had both of those errors and was statistically the worst offensive player that first set.

Every other Husker with at least an attempt hit over .500 as freshman outside hitter Madi Kubik, junior outside hitters Lexi Sun and Jazz Sweet, junior middle blocker Lauren Stivrins and sophomore setter Nicklin Hames all had no errors.

From the first serve, Hames played a more aggressive role in scoring against the Cardinals. Hames had three kills in the first set and though only had one more kill in the next two sets, she had 11 attacks.

“They’re not really used to seeing a setter dump, they really don’t see it in practice,” Hames said. “That was kind of on the game plan.”

It is not often that a setter is outhitting some hitters on the opposing side but when that does happen, the opposing offense is struggling mightily. Hames had four kills, more individual kills than six Cardinals who had at least one attack.

The offensive domination by Hames carried over to the rest of the team. Hames was swinging well and combined with her elite passing skills, the Husker offense rolled right through an inferior Cardinals defense.

Kubik and Stivrins led the Huskers with 11 kills each and Stivrins had the only attack error between the two. Stivrins was a force unlike anything Ball State had seen as she had nine kills on just 12 attempts through the first two sets.

That is good for a .750 hitting percentage due to Stivrins not getting a single error. The surgical cuts of the Cardinals’ defense also gave rise to the rest of the Nebraska outside hitters.

As if Stivrins was not menacing enough, Kubik played a flawless game on offense. Kubik had zero attack errors despite hitting more than Stivrins.

The performance by the freshman was also the first error-free match of her career. A challenge by Cook saved Kubik’s errorless match when he challenged a kill while up 22-10. Originally ruled out, the call was reversed and Nebraska was up 23-10 in the third set.

“Our mindset going out there was just to be aggressive,” Kubik said. “I knew I got her but I didn’t know if they were going to be able to see it so that was cool.”

The rest of the Husker offense did not lag far behind. Nebraska hit .425 while the Cardinals’ offense hit .010. Nebraska had taken care of business in the first round and avoided any potential letdowns in the opening match.

Freshman libero Kenzie Knuckles comes from Yorktown, Indiana, a town near Muncie, Indiana, where Ball State is located. Because of this, she saw some familiar faces for that she had seen back in high school.

One particular Cardinal player stood out. Senior defensive specialist Kate Avila was teammates with Knuckles back in high school for one year and reflected on their short time together.

“I just remember her having a lot of talent right off the bat,” Avila said. “She helped us get to the state tournament that year and was a big part of our success as a team.”

Similar to most matches back in high school, Knuckles had a great performance that put the finishing touches on a solid team win. She had 13 digs along with six assists to help shore up the  defense.

For Nebraska, Knuckles did her job and made sure that Hames was getting the second touch. The match quickly got out of hand and Nebraska rolled its way to another first round match win.

Nebraska next plays Missouri in the second round on Dec. 7 at 7 p.m. The Big 12 rematch should be much closer for Nebraska as Missouri also swept its opponent.