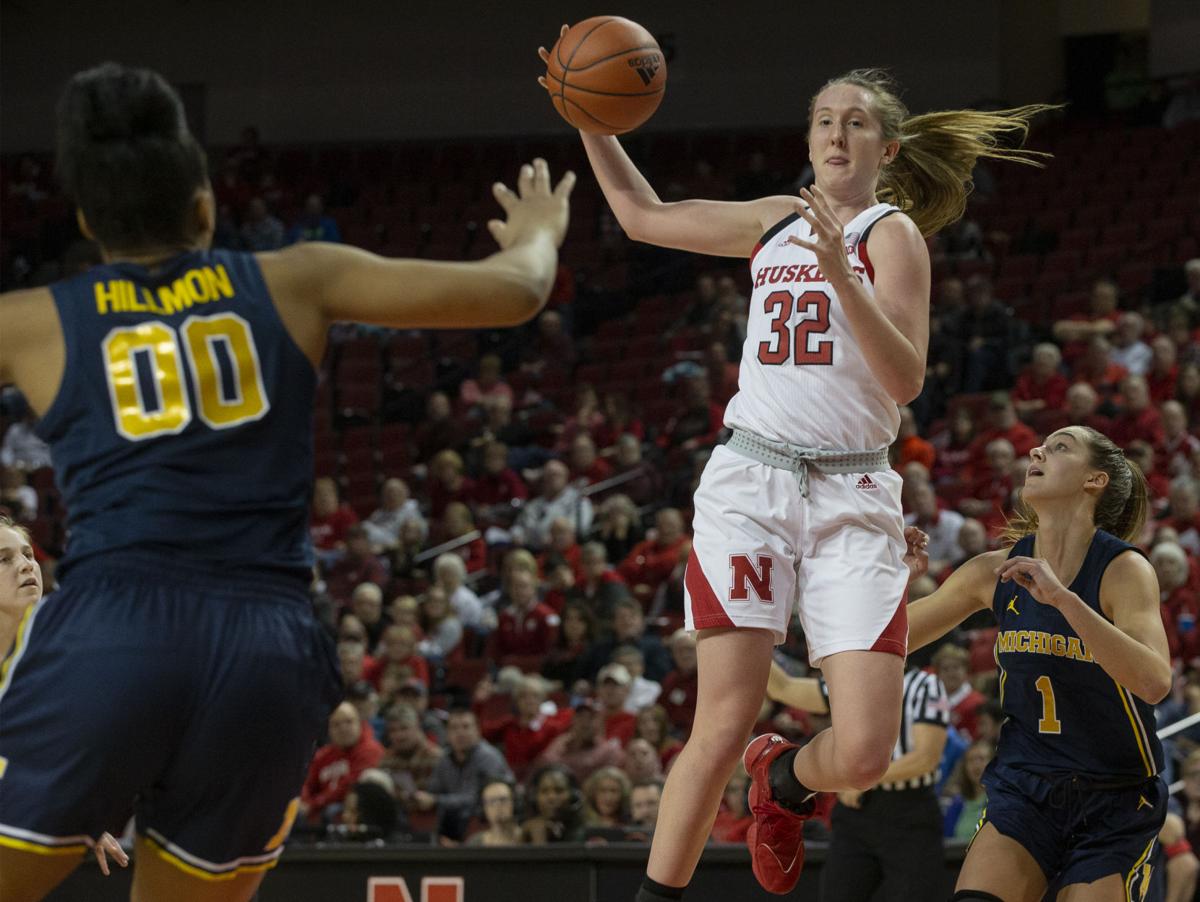 Nebraska’s Leigha Brown (32) goes in for a basket during the match against Michigan at Pinnacle Bank Arena on Sunday, Jan. 19, 2020, in Lincoln, Nebraska. 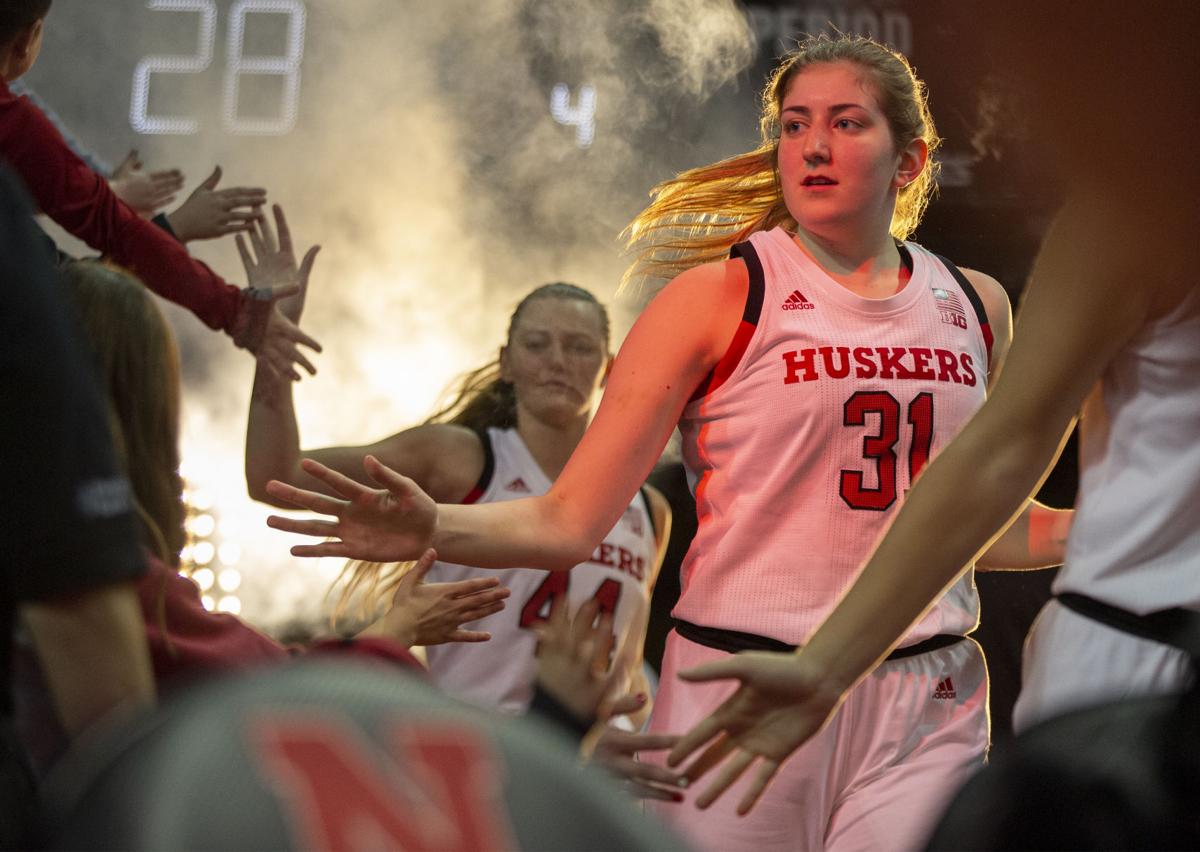 Nebraska’s Kate Cain (31) high fives fans as she takes the court before the match against Michigan on Sunday, Jan. 19, 2020, at Pinnacle Bank Arena in Lincoln, Nebraska, 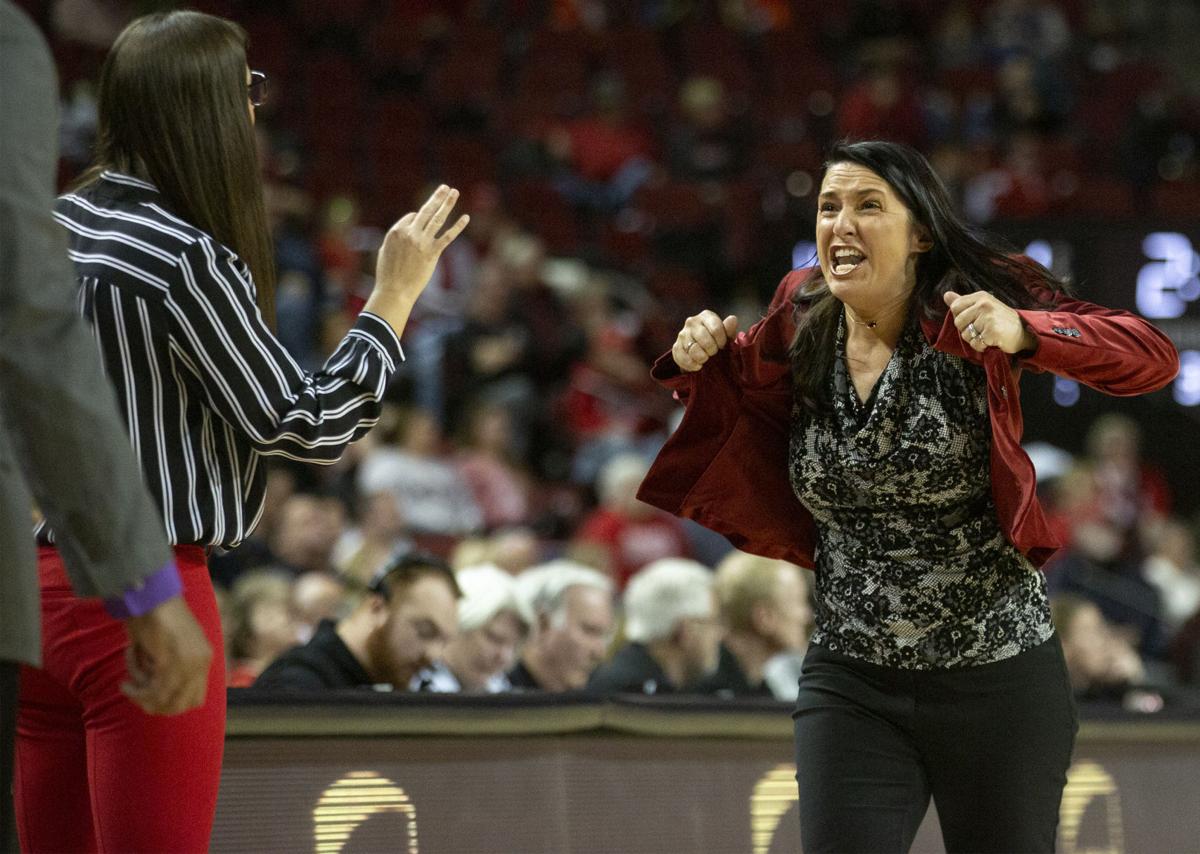 Nebraska coach Amy Williams reacts to a call during the match against Michigan at Pinnacle Bank Arena on Sunday, Jan. 19, 2020, in Lincoln, Nebraska.

Nebraska’s Leigha Brown (32) goes in for a basket during the match against Michigan at Pinnacle Bank Arena on Sunday, Jan. 19, 2020, in Lincoln, Nebraska.

Nebraska’s Kate Cain (31) high fives fans as she takes the court before the match against Michigan on Sunday, Jan. 19, 2020, at Pinnacle Bank Arena in Lincoln, Nebraska,

Nebraska coach Amy Williams reacts to a call during the match against Michigan at Pinnacle Bank Arena on Sunday, Jan. 19, 2020, in Lincoln, Nebraska.

Sophomore guard Sam Haiby had gone 1-2 from the free throw line with seven seconds left in the game, giving Michigan a chance to tie the game with a 3-pointer and force overtime.

The Wolverines’ final possession wound up with two airballed 3-pointers, the first one defended by senior guard Nicea Eliely. Two years ago, Eliely was in a similar situation and fouled the shooter. Michigan hit all three free throws and won in overtime.

“I get reminded of that game every year,” Eliely said. “It was a bit of a flashback but it didn’t happen this time.”

This time, there were no fouls and no surprise calls as Nebraska won 74-71 and snapped its two-game skid. Like the last two games, Nebraska had fallen behind by double-digits in the second half and faced its biggest deficit at home this season.

With 8:29 left in the third quarter, Nebraska was down 41-28 and head coach Amy Williams called her first second half timeout. Eliely threw an ugly pass that was stolen by Michigan guard Naz Hamilton and now the Huskers were in a hole.

Nebraska gave up a 6-0 run to start the second half but after the Williams timeout, Nebraska began clawing its way back into the game. Senior guard Hannah Whitish had Nebraska’s first points of the second half with her fourth 3-pointer of the game.

Sophomore forward Leigha Brown also got on board with her first two points, cutting the lead to 41-33. Michigan scored again to take a 43-33 lead with 5:23 left before giving up a Husker 7-0 run in one minute.

“They went on their run right at the beginning of the third,” Whitish said. “We wanted to make that run… to show them that we weren’t backing down.”

Nebraska’s one minute run and longer final five minute 15-5 run came from its guards and cleaning up on the offensive glass. Michigan grabbed nine offensive rebounds in the first half and controlled the glass for most of the game.

The Wolverines had their way down low, nullifying junior center Kate Cain and sophomore forward Ashtyn Veerbeek from establishing themselves in the paint. The two had just six points, but Nebraska stayed in the game due to Haiby and Whitish.

Haiby had 10 points while Whitish had 11 and the guard duo hit five 3-pointers in the first half. Nebraska found a hole in the Wolverine defense but the Huskers needed to clean up their defense.

The third quarter ended with Whitish’s buzzer beating 3-pointer, cutting the Michigan lead to 49-48 and also regaining the momentum.

“I was hyped,” Whitish said. “I was excited because Sam did a great chance of sucking in the defender.”

The momentum carried into the fourth quarter where Haiby hit a 3-pointer to take a 51-49 lead. That was the first Husker lead of the second half and the game became a back-and-forth shooting affair.

Nebraska made 4-5 shots from beyond the perimeter while Michigan went 4-6, tying the Wolverine total from the previous three quarters. Despite that, Nebraska stayed one step ahead of the Michigan.

The Huskers shot 80 percent from the free throw line, hitting 12 free throws in the fourth quarter to stay ahead. Nebraska was led by Brown at the line, who hit five of those.

Brown’s performance was unusual, as she only made one basket but Nebraska managed to overcome its leading scorer’s struggles. The shooting from the trio of Haiby, Whitish and Eliely combined for all 12 3-pointers and half of those came from Whitish.

“We hit a lot of big shots down the stretch,” Haiby said. “Because of last year, we’ve all matured a lot more and it’s showing right now.”

Nebraska plays against Purdue on Wednesday to continue its home stretch.