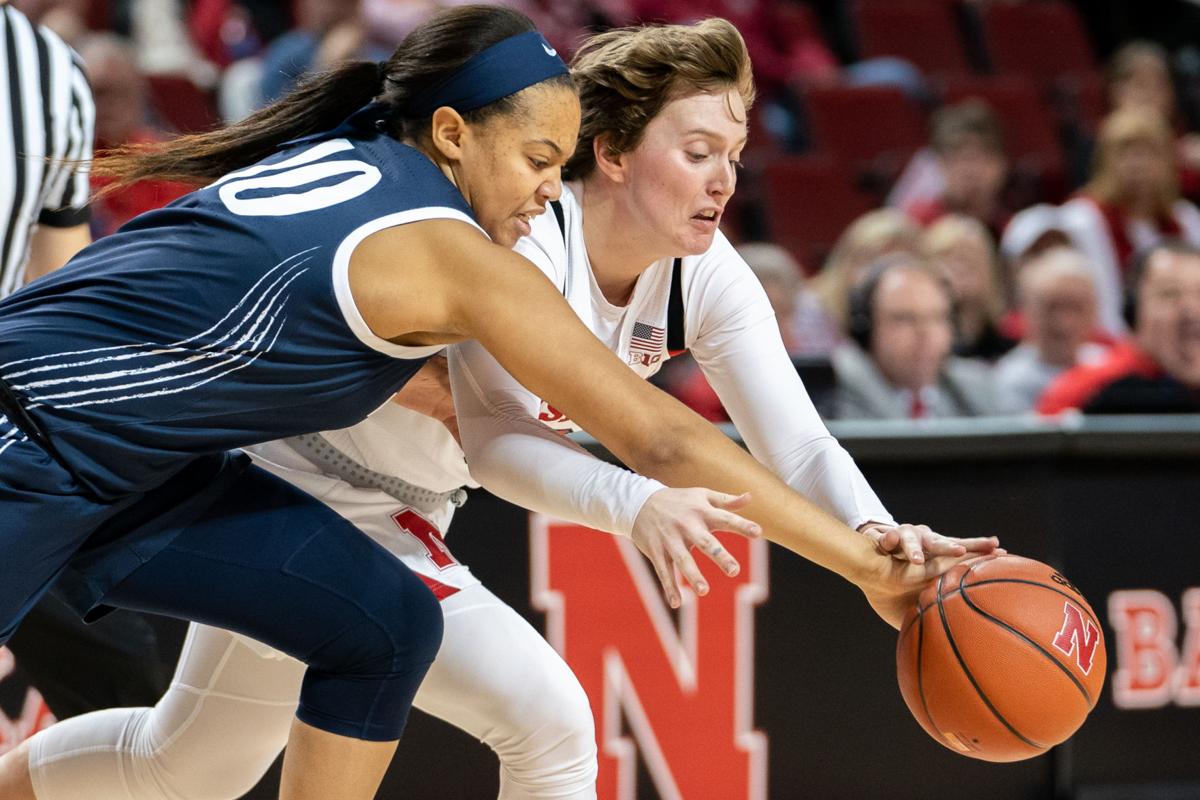 Nebraska’s Hannah Whitish (white) dives for a loose ball during the Huskers’ matchup against Penn State at Pinnacle Bank Arena on Thursday, Feb. 13, 2020, in Lincoln, Nebraska. 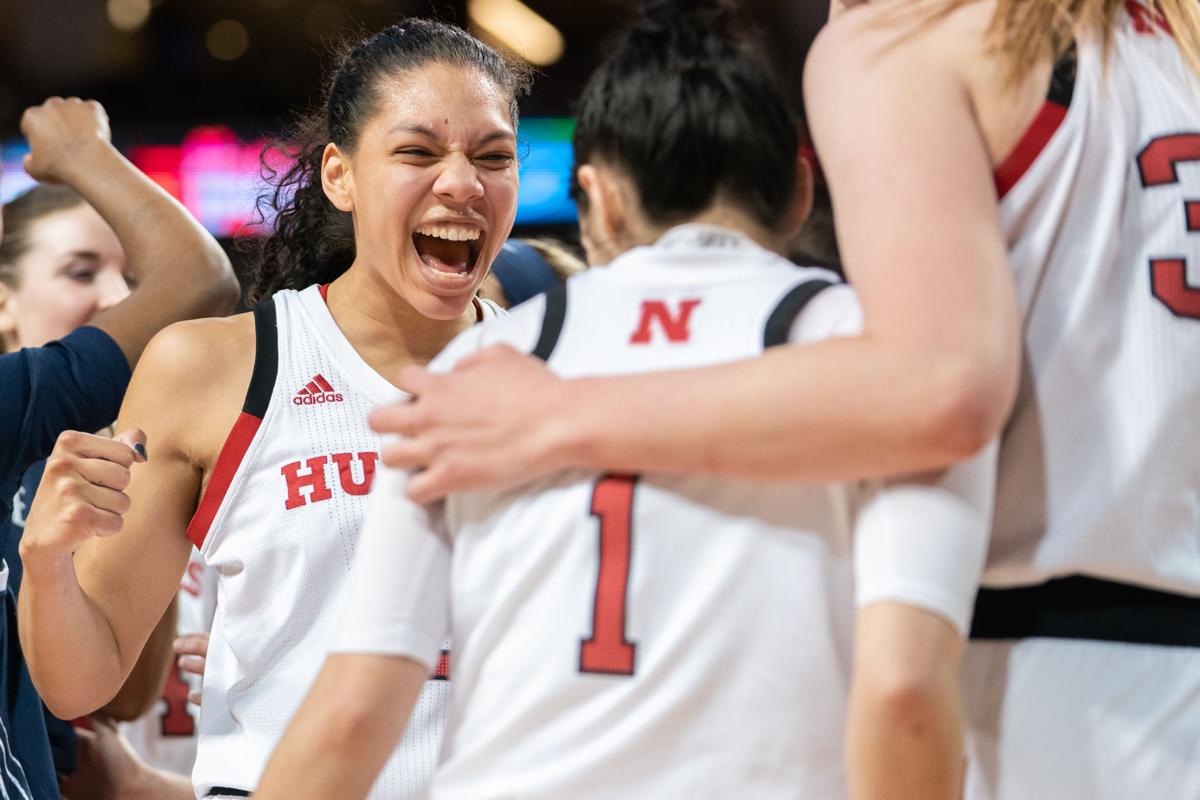 Nebraska’s Hannah Whitish (white) dives for a loose ball during the Huskers’ matchup against Penn State at Pinnacle Bank Arena on Thursday, Feb. 13, 2020, in Lincoln, Nebraska.

Nebraska women’s basketball desperately needed a win on Thursday night to snap its four-game losing streak. Penn State is ranked last in the Big Ten, so if Nebraska didn’t come out on top, that would’ve been a bad sign for the rest of its season.

Penn State came to Lincoln on a nine-game losing streak and the Huskers made it ten, winning with a score of 75-58.

Sophomore guard Sam Haiby assisted on a layup by sophomore forward Ashtyn Veerbeek for the first points of the game.

Penn State’s offense was sparked by three 3-pointers within the first four and a half minutes.  The Huskers kept up with a 3-pointer from sophomore guard Sam Haiby, a layup from sophomore forward Ashtyn Veerbeek and a jumper from junior center Kate Cain.

The game was tied at 9-9 halfway through the first quarter and tied again at 13-13 with a little over two minutes remaining. From there, the Nittany Lions began to pull ahead a bit. Freshman guard Shay Hagans drained a 3-pointer followed by two more made shots from Penn State, bringing the score to 20-13 in favor of Penn State with a minute remaining in the quarter.

A jumper from sophomore forward Leigha Brown and free throw from Veerbeek brought the score to 20-16 at the end of the first.

Nebraska’s offense struggled in the first couple minutes of the second quarter, but was revived with a 3-pointer from senior guard Hannah Whitish. Veerbeek added a 3-pointer of her own with three and a half minutes left in the half, bringing the score to 26-24, with Penn State still holding on to the lead.

The Nittany Lions responded with a made shot from freshman guard Makenna Marisa, Penn State’s leading scorer on the night with 15 points, and a 3-pointer from freshman forward Anna Camden. Penn State led 31-24 with under three minutes in the half.

The Huskers took control in the last two and a half minutes of the half, with three players getting to the line to shoot free throws where they were perfect making all six free throws. Nebraska went into halftime with their first lead since the beginning of the first quarter with a 32-31 score.

Cain recorded four of her six total blocks on the night in the second quarter. She also led Nebraska with eight total rebounds throughout the game.

After finishing the second quarter strong, it was important to continue that effort and come out hot for the second half.

“We just wanted to carry the momentum over. Obviously, it’s kind of known [that] we struggle in the third quarter,” Brown said.

However, she noted tonight the team did a good job of carrying that momentum they gained in the end of the second quarter over to the third and fourth quarters.

This game was the highest scoring third period the Huskers had this season, a big step for a team pushing to play a good full 40-minute game.

Nebraska dominated the second half. Cain contributed the first four points of the third quarter. Freshman guard Makenzie Helms made an and-one and added three points, bringing the score to 45-36.

Brown put in a shot from behind the arc and followed up with a jumper 30 seconds later, making it 54-41. Brown led the team with 20 points on the night. She was joined by Veerbeek, Bourne and Haiby who all scored double-digits points.

“[Brown] had a hot hand tonight so I just keep feeding her, let her do her thing,” Haiby said.

The Huskers led the Nittany Lions 58-43 at the end of the third quarter and remained in control throughout the fourth quarter.

Penn State opened up the quarter with a 3-pointer from Marisa within the first couple minutes, but the Husker offense was still hot.

Midway through the quarter, Bourne hit a 3-pointer giving Nebraska its largest lead of the night at 69-48. Brown scored the last five points for the Huskers with two free throws and a 3-pointer.

“It’s just a great feeling that we finally broke through. Hopefully we can use this as momentum as we go into the next game so that we can finish the regular season strong,” Veerbeek said.

Nebraska will travel to Northwestern on Sunday, Feb. 16 for its next game. Head coach Amy Williams called Northwestern’s team this season “exceptional.”

Northwestern has some of the best 3-point shooters in the conference, so perimeter defense will be crucial.

“I think the most important thing is we’ve got to take care of the basketball and be ready to knock down some shots,” Williams said.