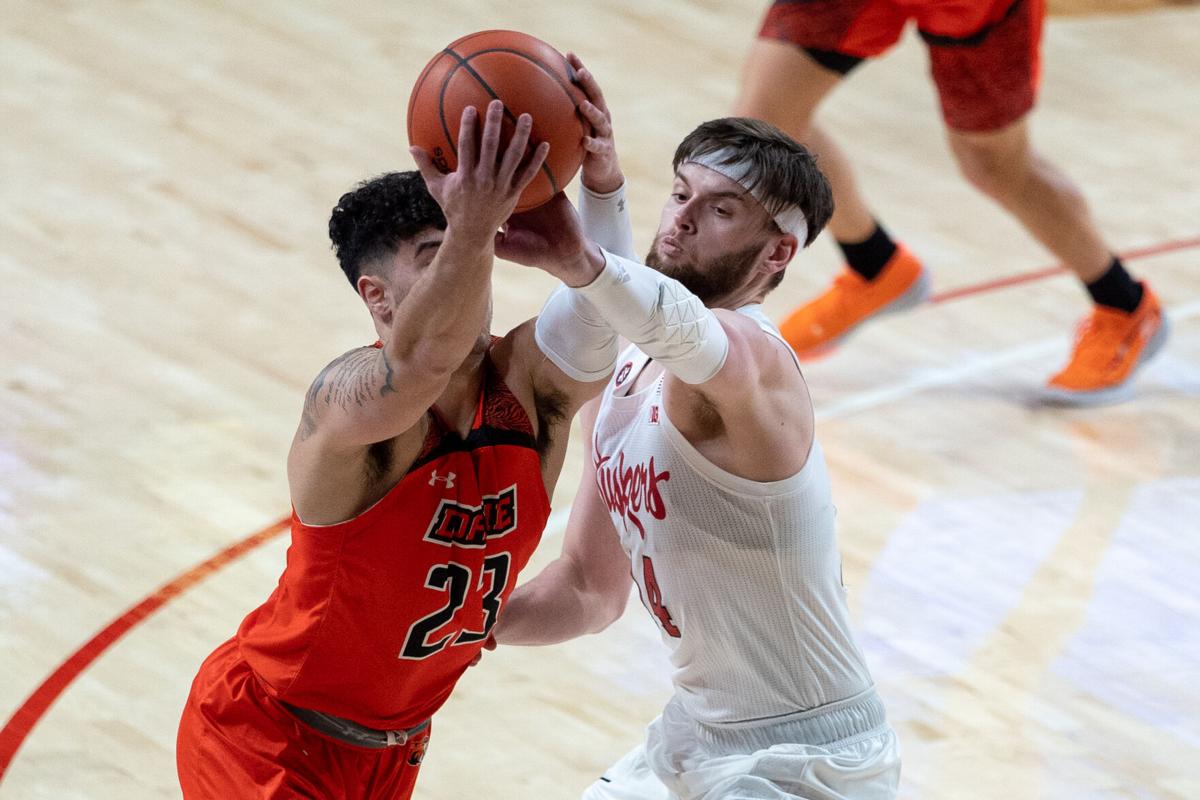 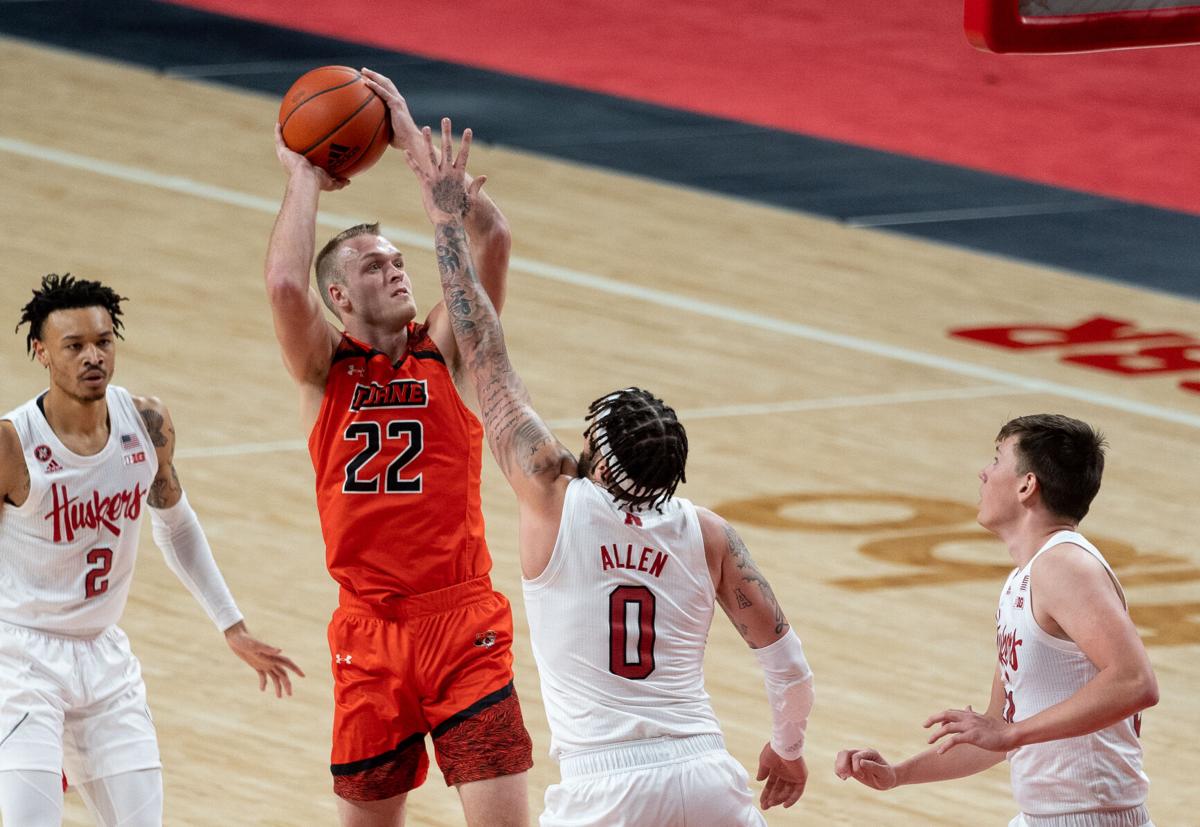 Doane’s Jaxon Harre (22) goes up for a shot against Nebraska’s Teddy Allen (0) during the game at Pinnacle Bank Arena on Thursday, Dec. 17, 2020, in Lincoln, Nebraska.

Doane’s Jaxon Harre (22) goes up for a shot against Nebraska’s Teddy Allen (0) during the game at Pinnacle Bank Arena on Thursday, Dec. 17, 2020, in Lincoln, Nebraska.

For all intents and purposes, Nebraska’s 110-64 drubbing of Doane on Thursday night was as effective as it needed to be.

Not much was expected of the Tigers, an NAIA school playing their ninth game in 19 days. Nebraska and Doane traded blows briefly in the first half, and the Huskers held just a 23-19 advantage with 9:43 left in the first half. However from there, the rout was on.

Nebraska closed the first half on a 34-7 run to blow the game open and didn’t look back. Doane fought valiantly, but Nebraska did whatever it wanted on both offense and defense with little resistance. A blowout victory over a vastly inferior opponent ordinarily may not have much to offer in terms of takeaways, but this is no ordinary season and Thursday’s game provided plenty of storylines.

Here are five takeaways from the Huskers’ last nonconference game.

One of the main purposes of scheduling a program like Doane was so freshman center Eduardo Andre could dip his toes in the water before being essentially thrown to the lions that are Big Ten big men.

Andre, a London native, had missed Nebraska’s previous six games due to contracting COVID-19. Head coach Fred Hoiberg noted that it would take a while to get Andre back into basketball shape, but the 6-foot-10 big man flashed his potential on Thursday night.

He played in 14 minutes, finishing with nine points on a perfect 4-of-4 shooting along with three rebounds. Doane had almost no size to challenge Andre inside, but he showed good post moves and a nice touch around the rim.

“He’s a confident kid. To see some of the plays he made on the block, I didn’t see any jitters out there,” Hoiberg said postgame. “I thought he made a couple really nice plays off the dribble. [He] gave Yvan [Ouedraogo] a nice post feed there towards the end. That kid's got a lot of upside. He's a guy who's going to get better as he gets stronger and grows into his body.”

As the season progresses, look for Andre to improve on the defensive side of the ball. Andre had three personal fouls against Doane and was frequently out of position on the defensive end. He was caught reaching into passing lanes and failing to come away with the ball on multiple occasions, which, in turn, led to easy opportunities for the Tigers at the rim.

Of course, Andre’s defensive performance wasn’t all bad. He did finish with two blocks, a good sign moving forward. Thursday’s game was a good introduction to the collegiate game for Andre, and his size and athleticism should provide an unique complement to sophomore forward Yvan Ouedraogo.

Still, the performance of senior forward Trevor Lakes has to be commended. Lakes, who was deemed eligible by the NCAA this afternoon, proved his reputation as a 3-point specialist to be more than accurate. He finished with 12 points on 4-of-5 shooting from long range. Lakes also had six rebounds, two assists and played a team-high 26 minutes.

Lakes’ performance was no aberration, either. At UIndy, a Division II school that served as his previous home, he knocked down 255 career 3-pointers at a 41% clip. Despite the level of competition offered on Thursday night, Lakes’ lightning-fast release will lead to him getting plenty of looks as conference play rolls around.

Nebraska entered Thursday’s game a below-average team from long range, a concerning trend given the propensity of Hoiberg-coached teams to hoist the long ball. The Huskers shot 36.4% from 3-point range against Doane, which is an improvement on past efforts, but it must be noted that a majority of these attempts were wide-open looks.

A more consistent role in the offense for Lakes can help the Huskers cure their 3-point woes and, like Andre, Lakes showed that he will have an integral part in the Husker rotation in conference play.

Dalano Banton records his first triple-double as a Husker, and it probably won’t be his last

This was probably an easy call, but after one game of watching sophomore guard Dalano Banton I knew he’d have the chance for multiple triple-doubles this season.

Banton had 13 points, 11 rebounds and 10 assists against Doane on Thursday night, his first triple-double at Nebraska and only the second in program history. The fact that the guard managed these numbers in just 21 minutes makes his performance all the more impressive.

In Nebraska’s last two games, Banton had eight total turnovers and looked to be forcing plays at times. He looked much more comfortable with the ball against Doane however, as previously mentioned, Doane didn’t offer much defensive resistance to anyone wearing a Husker uniform.

As he’s done all season, Banton managed to fully stuff the box score, with three blocks and a steal to complement his triple-double. He did have two turnovers, perhaps the only stain on an otherwise impressive night, but this is mitigated by the sophomore’s high playmaking work load.

Banton continues to look like the ideal point guard to run Hoiberg’s offense, and Thursday’s impressive outing should do wonders for his confidence moving forward.

Every Husker to see the floor finds the scoresheet

Another great reason to schedule an opponent like Doane is to get your roster confident in their offensive game.

Nebraska certainly did that on Thursday night, as all 11 Husker players that saw the floor also scored. Junior guard Teddy Allen led the way with 16 points on 7-of-14 shooting. Ouedraogo had perhaps one of his best games as a Husker, notching an impressive 13-point, 13-rebound double-double. The 13 points was Ouedraogo’s career high, and he also was an impressive 7-of-10 from the free throw line. Banton finished with an aforementioned 13 points of his own.

Lakes and senior guard Kobe Webster each finished with 12 points, rounding out the Huskers’ double-digit scorers. As a team, Nebraska shot a blistering 55.4% from the field.

It may have come against Doane, but Thursday night’s victory was yet another example that when Nebraska wins, the scoring distribution is spread. The Huskers have had at least four double-digit scorers in all of their victories this season, a trend that will hopefully continue in Big Ten play.

Get ready for the Big Ten gauntlet, Nebraska

Thursday’s win may be the last time Nebraska experiences a victory for a while.

There are no easy games in the Big Ten, but the Huskers will be thrown into the fire early on. The Huskers’ first four Big Ten games are against ranked opposition, the first of which is a Dec. 22 battle against No. 12 Wisconsin.

The conference currently has seven teams ranked in the AP Top 25, so a largely inexperienced Nebraska roster will be tested from the jump. The addition of Lakes and Andre, as well as the introduction of junior forward Derrick Walker, will make this roster much more talented and competitive than last year’s group under Hoiberg.

However, Nebraska’s final conference record may not show it. The Huskers should surpass their 2-18 Big Ten record last year, although anything above seven or eight wins would be considered massively overachieving. Either way, it’ll be interesting to see how the Huskers adjust to the rigors of the Big Ten.