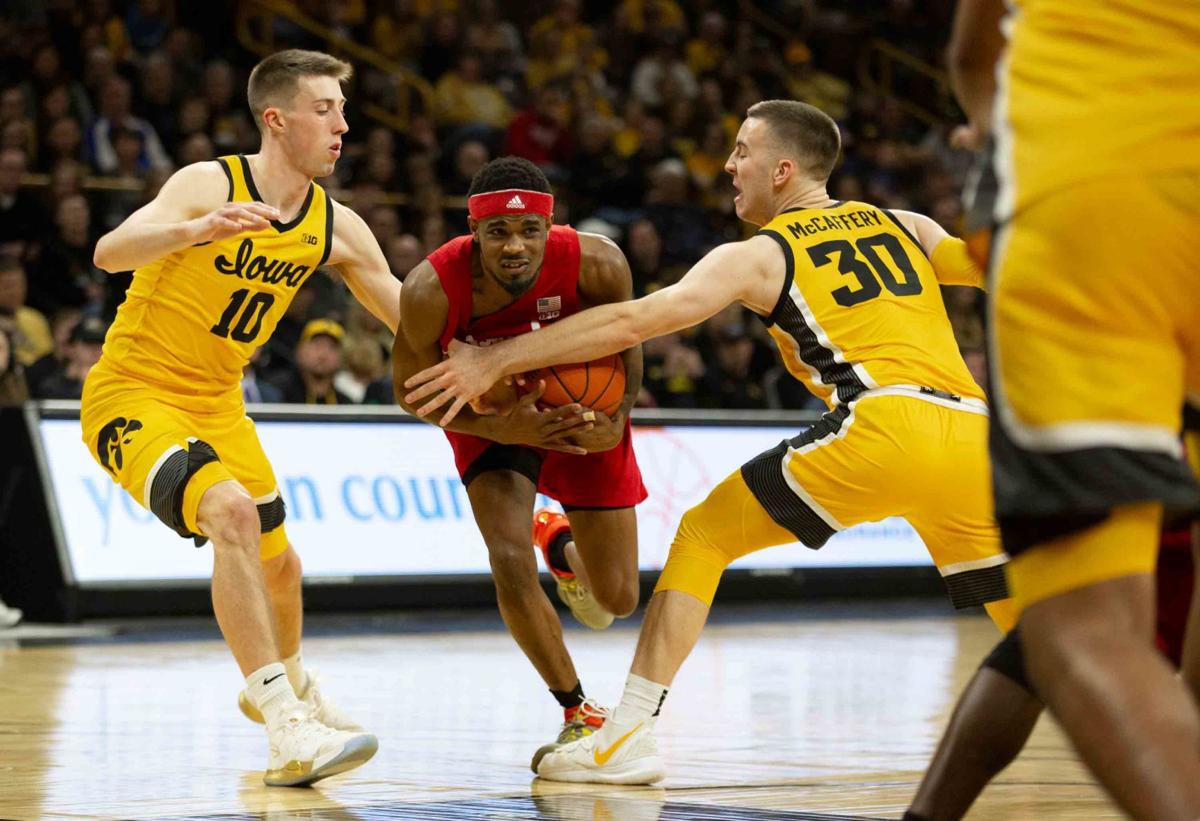 Nebraska's Dachon Burke Jr. (11) drives to the bucket surrounded by Hawkeyes at the Carver-Hawkeye Arena in Iowa City, Iowa, on Saturday, Feb. 8, 2020. 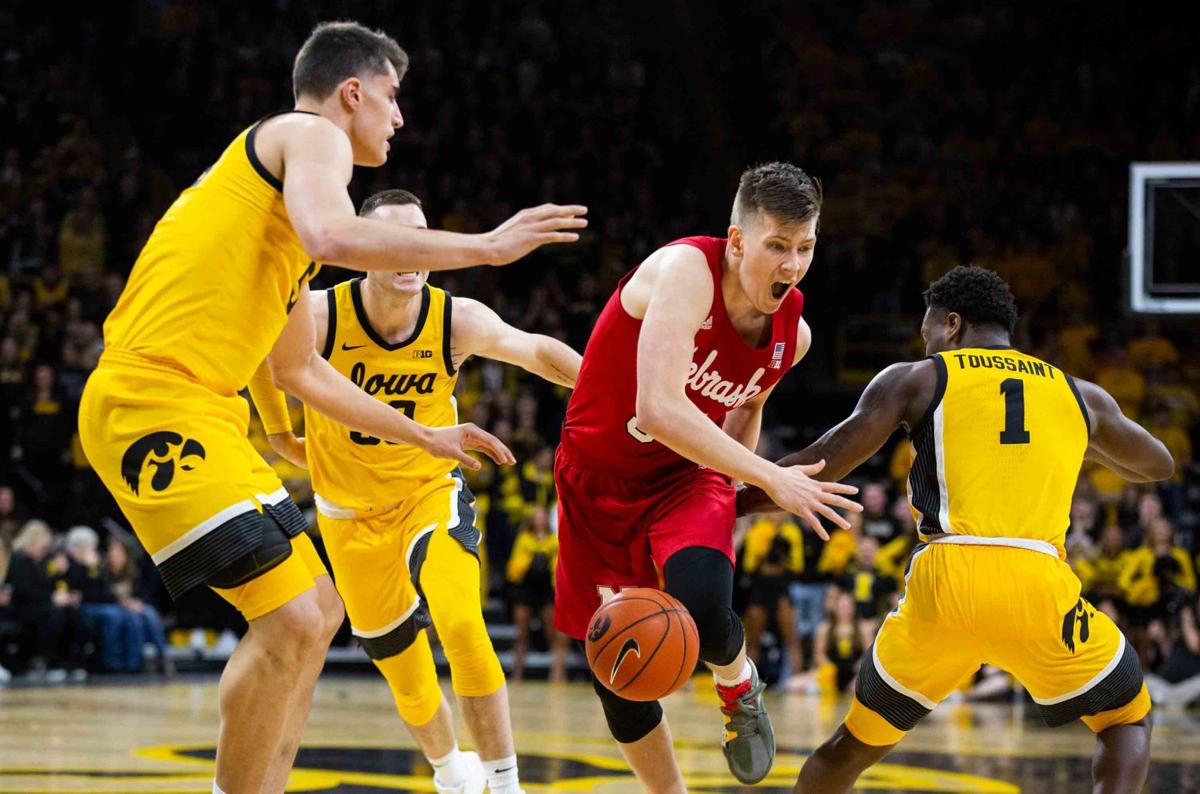 Nebraska's Thorir Thorbjarnarson loses the ball during a game against Iowa at the Carver-Hawkeye Arena in Iowa City, Iowa, on Saturday, Feb. 8, 2020.

Nebraska's Dachon Burke Jr. (11) drives to the bucket surrounded by Hawkeyes at the Carver-Hawkeye Arena in Iowa City, Iowa, on Saturday, Feb. 8, 2020.

Nebraska's Thorir Thorbjarnarson loses the ball during a game against Iowa at the Carver-Hawkeye Arena in Iowa City, Iowa, on Saturday, Feb. 8, 2020.

Nebraska battled for a half on Saturday evening at Carver-Hawkeye Arena against No. 17 Iowa, but one half of play was all the Huskers were able to put together. Head coach Fred Hoiberg couldn’t revive the gritty effort the Huskers gave in the teams’ first meeting with the Hawkeyes in January, and Iowa dominated Nebraska 96-72.

Here are five takeaways from a blowout loss.

Luka Garza and Joe Wieskamp dominate in rematch with Huskers

Iowa put together a stunning offensive performance that saw it score 96 points despite not scoring for an eight-minute stretch in the first half, and it was led by junior center Luka Garza and sophomore guard Joe Wieskamp.

Garza, a surefire All-American and contender for National Player of the Year, had 22 points on 9-13 shooting. He had his way with whoever Nebraska decided to throw at him, proving why he’s one of the most effective scorers in the country.

“Garza is, in my mind, as good a player as there is in the country right now.” Hoiberg said postgame. “He carves out space as well as anybody I have seen at this level.”

Wieskamp one-upped Garza with a career-high 30 points in an impressive scoring performance. What makes Wieskamp so efficient is his ability to score from everywhere on the floor, and that was on display against the Huskers. He was 8-8 from the free-throw line, drilled two 3-pointers and easily drove to the basket all night, adding up to a 10-15 night from the field

Garza and Wieskamp played well in the teams’ first meeting in Lincoln. Garza had 16 points and 18 rebounds while Wieskamp led Iowa in scoring with 21 points. However, Wieskamp shot 1-10 from 3-point range in the January matchup and Garza went long stretches without being involved in Iowa’s offense.

Both had something to prove on Saturday night, and they proved it in commanding fashion.

There aren’t many positives to take away from this one, but the play of junior guard Jervay Green impressed—especially as Nebraska closed a big first-half deficit.

The Huskers found themselves down by more than 14 points for the eighth consecutive game quickly against the Hawkeyes. Nebraska trailed Iowa 23-7 with 14:21 in the first half thanks to an outside shooting barrage by Garza, sophomore guard Connor McCaffery and freshman guard CJ Fredrick.

Nebraska battled back, mainly due to the excellent play of Green. He got out in transition with sophomore guard Cam Mack for easy points, made cuts for layups in half-court sets and grabbed key rebounds on the defensive end.

A Green layup with 4:11 left to play in the first half cut Iowa’s lead to 27-23. Even as Iowa broke out of its long scoring drought in the final few minutes, Green had five late points to keep the Hawkeye advantage at six before Iowa extended it to 41-30 by halftime.

Green had a team-high 11 points and five rebounds in the first half. He finished with 18 points on 8-12 shooting, and the Huskers outscored the Hawkeyes by seven points while Green was on the floor.

In a game full of negatives, Green’s performance was encouraging as he looks to cement his place in Nebraska’s rotation in the last month of the season.

Nebraska’s first half was a microcosm of its season

The first half of Saturday’s game had pretty much everything that Nebraska basketball fans have seen this season.

First, there was the slow start. Iowa took advantage of poor Nebraska perimeter defense and raced out to a 13-2 lead, which later turned into a 23-7 advantage. The Huskers have had poor starts all season. While they’ve usually come in the start of the second half, this game was yet another example of the Huskers being unable to dig themselves out of a big hole.

“Obviously it was not a good start for us tonight.” Hoiberg said. “We get down 13-2 and dig ourselves that type of hole, we get down 16 and then we started playing.”

And start playing they did. Hoiberg’s fast-paced offense made an appearance for a seven-minute stretch in the middle of the first half as Iowa’s lead shrunk. Nebraska seemed to be finding its confidence, and looked to compete in the second half facing a reasonable halftime deficit.

But as has been the case all year, hope vanished at the most inopportune time. Two Wieskamp free throws made it 38-30 with one minute to go in the first half. Then, as time expired in the first half Fredrick threw up a one-handed prayer that found nylon to give Iowa an 11-point advantage.

That’s been the story for Nebraska basketball this season. Stretches of poor play have been followed by flashes of brilliance, only to leave a sour taste in everyone’s mouth at the end.

Hoiberg tinkers with the second-half lineup

Nebraska started the second half even worse than it started the first, and unlike previous games, the Huskers didn’t have a comeback in them.

An 11-point deficit turned into a 25-point deficit with 13:08 left in the second half. A stunned Husker squad could only watch as Iowa drained the life from Hoiberg’s squad in front of a rowdy home crowd.

With the game being so out of hand, Hoiberg tinkered with some interesting lineups in the second half. The most interesting of the bunch came during a stretch where Nebraska had Green, senior guard Matej Kavas, junior guard Thorir Thorbjarnarson and freshmen Charlie Easley and Akol Arop on the floor at the same time.

“I told the guys this week in practice that minutes were up for grabs,” Hoiberg said. “I wanted to reward the guys that competed all week.”

Hoiberg could’ve made all the changes he wanted, but it wouldn’t have provided any more of a spark in the second half. Iowa led by as many as 38 points before the Huskers made the score a bit more respectable in garbage time.

With the season being more about player development and implementing a system and less about wins and losses, it will be fascinating to see whether there are more major lineup shake ups as the regular season concludes.

Hoiberg didn’t have the demeanor of a coach that had lost his eighth straight game at the podium postgame.

He knew better than to react with fake outrage or to spew glittering generalities to appease fans. He knows that this season is about way more than what the scoreboard or standings indicate. This year is about building a culture and seeing what he has with this ragtag group of players assembled about eight months ago.

He’ll continue to state the facts and be honest with his assessments of his team. Hoiberg stressed postgame the importance of hard work during stretches like this, saying that diligent work in the film room and on the practice floor is “the only way out” of this skid.

But most importantly Hoiberg is refreshingly himself, evident by a quip to Iowa media at the start of his press conference about the butchering of the Iowa Caucus results and a sarcastic reply about returning to Iowa for the first time as a head coach since leaving Iowa State in 2015.

Hoiberg is the cool, calm and collected leader this group of players needs, and he will look to right the ship as Nebraska visits No. 9 Maryland on Feb. 11. Tipoff is at 7:30 and the game will be on Big Ten Network.