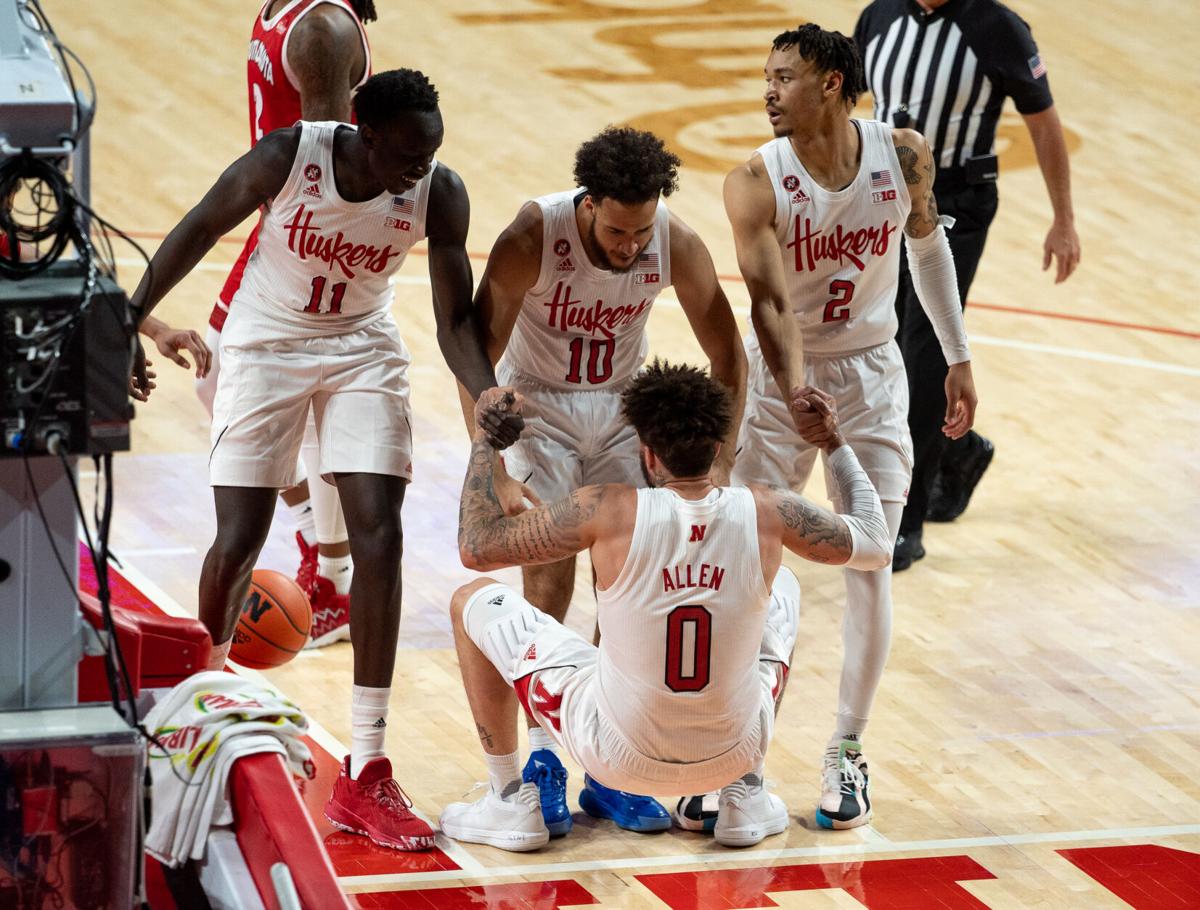 Nebraska’s Lat Mayen (11), Kobe Webster (10 and Trey McGowens (2) help Teddy Allen (0) up off the floor during the game against South Dakota at Pinnacle Bank Arena on Tuesday, Dec. 1, 2020, in Lincoln, Nebraska. 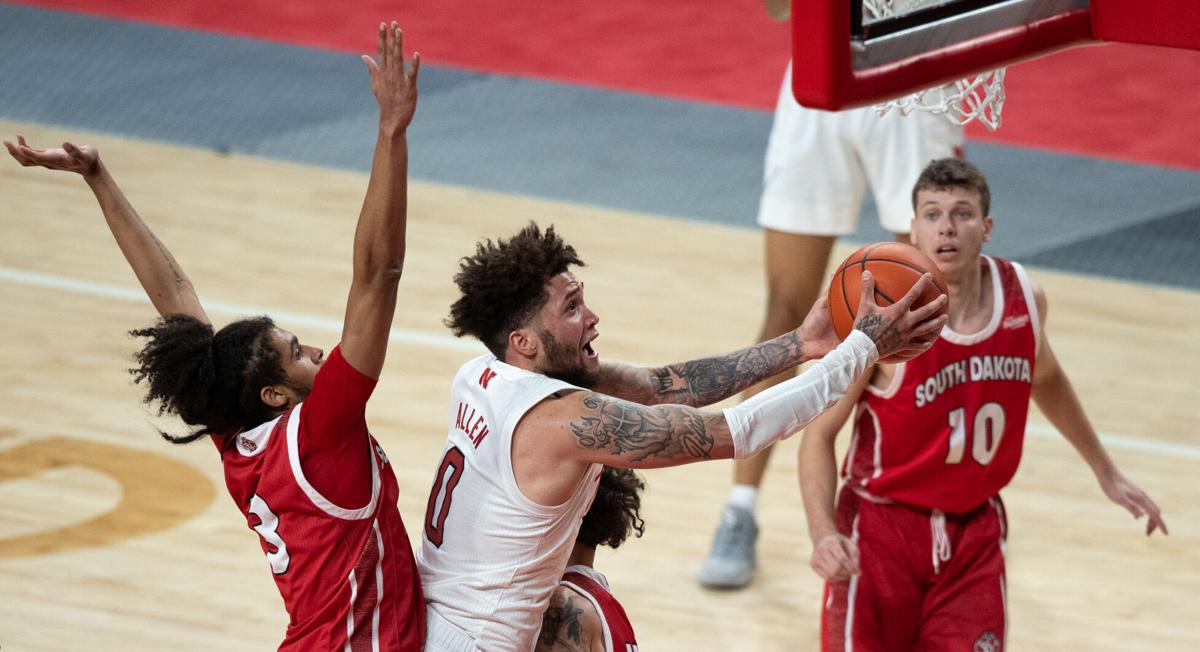 Nebraska’s Teddy Allen (0) goes up for a shot during the game against South Dakota at Pinnacle Bank Arena on Tuesday, Dec. 1, 2020, in Lincoln, Nebraska.

Nebraska’s Lat Mayen (11), Kobe Webster (10 and Trey McGowens (2) help Teddy Allen (0) up off the floor during the game against South Dakota at Pinnacle Bank Arena on Tuesday, Dec. 1, 2020, in Lincoln, Nebraska.

Nebraska’s Teddy Allen (0) goes up for a shot during the game against South Dakota at Pinnacle Bank Arena on Tuesday, Dec. 1, 2020, in Lincoln, Nebraska.

South Dakota cut the deficit to as close as four in the second half, but a late Husker run ultimately buried the Coyotes. Once again, the Huskers flexed their depth over an overmatched opponent, emerging victorious despite an uneven performance.

Junior guard Shamiel Stevenson filled their shoes admirably. He had seven first-half points on 2-of-4 shooting, helping to keep the Husker offense afloat. Most importantly, though, was his work on the defensive end.

Stevenson has a reputation for being a lengthy wing defender that can pose a matchup problem for opposing guards, and he pestered Coyote senior guard Stanley Umude for a good portion of Tuesday’s game. Umude, South Dakota’s leading scorer and one of the top scorers in the Summit League, finished with 23 points and 11 rebounds.

While that appears to be an impressive outing, Umude went 7-of-18 from the field, made just 1-of-6 3-pointers and missed his last five shots. Stevenson made Umude work for his 23-point outing, while finishing with 11 points and four rebounds of his own.

“I thought the player of the game was Shamiel,” Hoiberg said postgame. “He did a phenomenal job of coming out and guarding Umude, he was just kicking our butts out there and Shamiel really made him work for everything he got.”

Stevenson’s prowess on both ends of the floor resulted in him seeing his season-high in minutes with 26. His immense value on the defensive end of the ball allowed the Huskers to blow the game open in the second half.

Allen wasted no time getting back into the action in the second half after picking up three first-half fouls.

After hanging 22 points against North Dakota State last Saturday, Allen dropped 16 second-half points en-route to a 23-point outing against the Coyotes. Allen was an impressive 6-of-12 from the field in the final 20 minutes, scoring in a variety of ways.

Nebraska’s first points of the second half came on an Alllen steal, something he’s excelled at so far this season. He converted with an emphatic dunk to put the Huskers up 38-29. It set the tone for his second-half brilliance, as he scored at will using a variety of spin moves, creative dribbles and crafty finishes.

Perhaps the most impressive of these came with just over six-and-a-half minutes remaining in the second half with Nebraska leading 62-49. Allen crossed over and drove into the lane on Umude, got fouled and flipped a shot up and in as he was falling to the ground — a perfect example of the night he was having.

According to Hoiberg, Allen heated up when Nebraska needed him most, which resulted in the most points he’s scored in a Nebraska uniform. With Allen’s propensity to score in bunches at seemingly any moment, more 20-point outings are undoubtedly in his future.

When the Huskers win, the offensive wealth is spread

There’s a pretty common theme in Nebraska’s three victories this season. It’s a small sample size, but the Huskers have had at least four double-digit scorers in all three of their wins this season.

The Huskers had five double-digit scorers against the Coyotes, four in last Sunday’s win over South Dakota State and six in the season-opening romp over McNeese State. Nebraska had three players reach at least 10 points in its lone loss to Nevada.

It’s not an exact indictment of whether Nebraska will win or lose yet, but at the very least it’s a testament to this team’s depth on the offensive end.

Sophomore forward Yvan Ouedraogo was nowhere near double figures on Tuesday night, but his performance was overall indicative of the improvements he’s made from last year to this one.

He made his lone field goal attempt, finishing with two points. However, Ouedraogo excelled on the defensive end, grabbing four defensive rebounds and five total boards. The Frenchman also had two first-half blocks.

Interestingly enough, Ouedraogo finished with the highest plus-minus out of everyone on Nebraska’s roster on Tuesday night. Plus-minus isn’t the most tried-and-true analytical metric in the world, but it is worth noting that Nebraska outscored South Dakota by 15 points with Ouedraogo on the floor.

“I thought Yvan was terrific… He didn’t force anything, that’s been the thing as much as anything for Yvan, he wasn’t trying to force it through three or four guys,” Hoiberg said. “Five rebounds and no turnovers in 18 minutes is exactly what we need out of Yvan.”

Ouedraogo’s performance certainly didn’t light the world on fire, but it’s a step in the right direction for the 18-year-old with fascinating potential.

Outside of Umude and Plitzuweit, the Coyotes struggled offensively

That honor went to sophomore guard AJ Plitzuweit, who led all scorers with a career-high 24 points. He and Umude attempted over half of South Dakota’s field goals, combined to sink all but two of the Coyote’s 3-pointers and scored 47 of South Dakota’s 69 points.

The rest of South Dakota’s offense went quiet, a testament to another solid defensive performance from Nebraska. All other Coyotes went a combined 9-of-31 from the field on Tuesday, good for an abysmal 29%.

I’d be remiss if I didn’t briefly mention the offensive contributions of former Husker and current Coyote sophomore forward Brady Heiman, who returned to Lincoln for the first time since the 2018-19 season. He did start but was relatively quiet in his 36 minutes of action, finishing with two points, two blocks, two steals and no rebounds.

The Coyotes appear to be a solid unit, but will more than likely need more scorers behind Umude and Plitzuweit to emerge. Credit to Nebraska’s defense for shutting down South Dakota’s other scoring options, helping to lift the Huskers to 3-1.

Nebraska squares off with Florida A&M on Sunday, wrapping up the final game of the Huskers’ season-opening homestand. Tipoff is at 1:00 p.m. on the Big Ten Network.