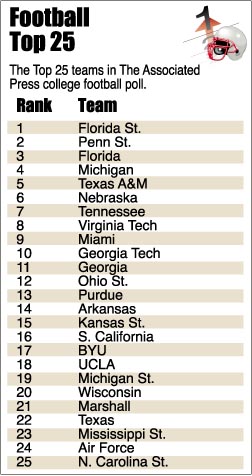 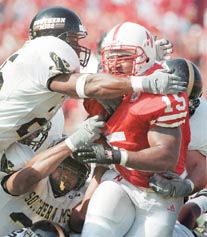 Standing at the entrance of the visitor's locker room, Southern Mississippi Head Coach Jeff Bower patted the rear of every Golden Eagle player, most of whom were crying or starting to."Is that everybody?" Bower drawled after 70 or so players had shuttled by. It wasn't. One straggler was left, still lingering on the field. Bower waited for him, too. Then he walked in right behind the player, briskly, with his head slightly hung.There wasn't much consolation for USM, which came to Memorial Stadium expecting to win and then, largely through its own mistakes and turnovers, threw away what might have been its biggest upset ever in a 20-13 loss to Nebraska Saturday."It's really very simple. We turned it over to them," Bower said. "You can't do that against good football teams. We had our opportunities. We didn't capitalize on them. We had too many breakdowns and too many turnovers to win. That's what we knew coming into the game we couldn't do."Southern Mississippi had six turnovers in all, each costly in its own way, except one interception at the end of the first half.Quarterback Jeff Kelly had a hand in five of those turnovers, throwing four interceptions and fumbling once. The fumble led to Julius Jackson's 16-yard return for the Cornhuskers' first score. Then Jackson intercepted a Kelly pass, which he also returned for a touchdown and the final 20-13 margin.Kelly then threw two interceptions inside NU territory in the fourth quarter. The final interception - made by NU's Keyuo Craver - came as USM was at the Nebraska's14-yard line."It was just a bad pass," said Kelly, who completed 23-of-45 passes for 268 yards and two touchdowns. "I had (Josh Gulley) over the middle. The pass just sailed on me."It also put an end to a game that saw USM out perform the Huskers in nearly every statistical aspect.The Golden Eagles outgained the Huskers 293-185. They had more first downs. They had 38 more offensive plays, fewer penalties, a better third down conversion rate, more time of possession and a better yard per play average. And still lost.But it wasn't for a lack of trying or strategy. USM, with its ever-changing defensive scheme, plugged up holes for the Nebraska offense, holding it to 119 rushing yards and forcing four turnovers. The Huskers never had a larger gain than 14 yards on the ground."The main thing in all our practice was having responsibilities," linebacker T.J. Slaughter said. "Some of us had dive, some of us had quarterback, some of us had the pitch. The whole defense played as a unit the whole game. It became an emotional game."I think we pretty much handled them. We ran everything well."Offensively, Southern Mississippi tried to keep the Blackshirts' defense off balance with a mix of run and pass. All the running came the way of H-back Derrick Nix, who carried the ball 29 times for 70 yards."We just wanted to get two, three, four yards per run," Bower said. "We did that. We didn't have any long runs, but we had like three eight or nine-yard runs in the game."Most of the passes went to receivers Todd Pinkston and Sherrod Gideon, both All-America candidates. Facing what Gideon called "the best secondary we've played," the two receivers combined for 19 receptions and 244 yards.Gideon dropped what could have been a touchdown at the end of the first half. Kelly lofted a pass that went through Gideon's hands at the NU six-yard line."Ralph Brown tipped it just a little bit," Gideon said. "I couldn't quite get it."The statement sort of summed up the day for the Golden Eagles but didn't leave the team wholly discouraged. Southern Miss can't be discouraged as it visits No. 7 Texas A&M next Saturday.But this Saturday was one big missed opportunity, Bower said, although he did leave one imparting message about the strength of his team."We probably should have won the football game," Bower said when asked if his team should be ranked. "Everybody says, 'Well, what's wrong with Nebraska?' Well, give us some credit. Don't take anything from our kids. They played hard."