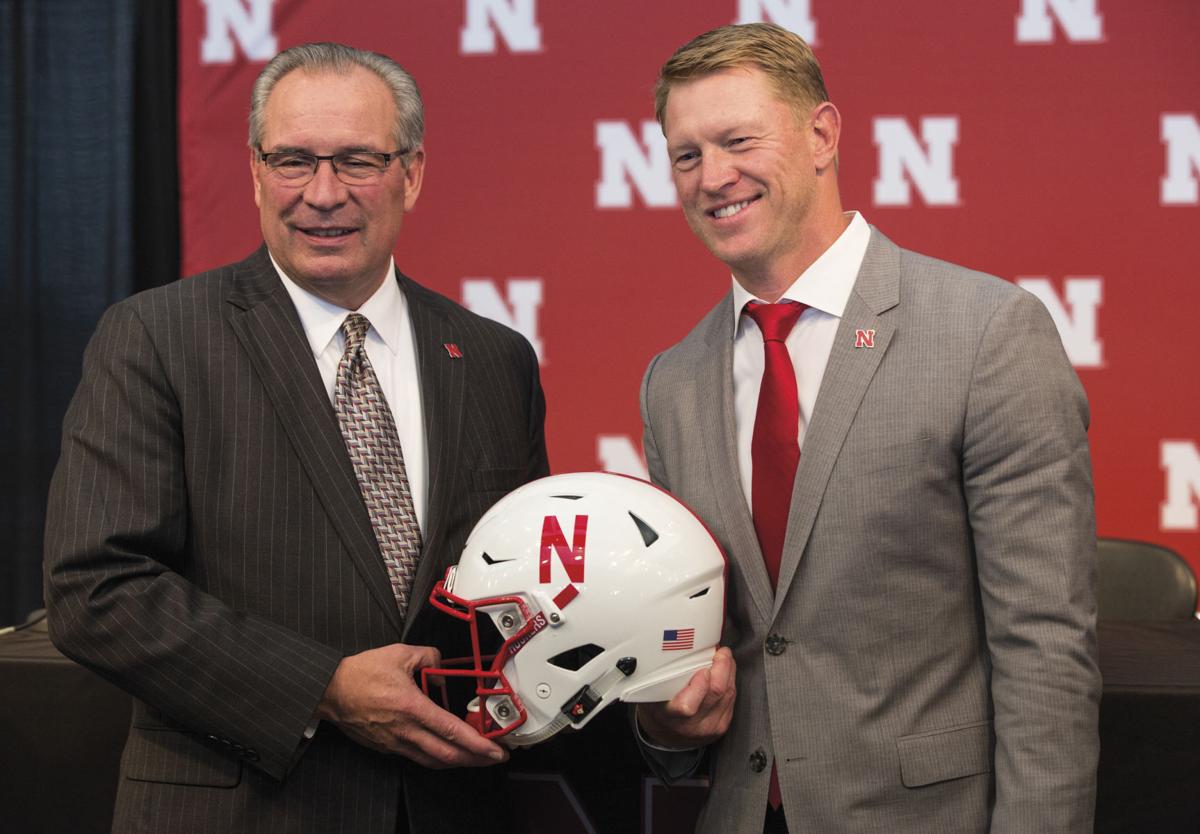 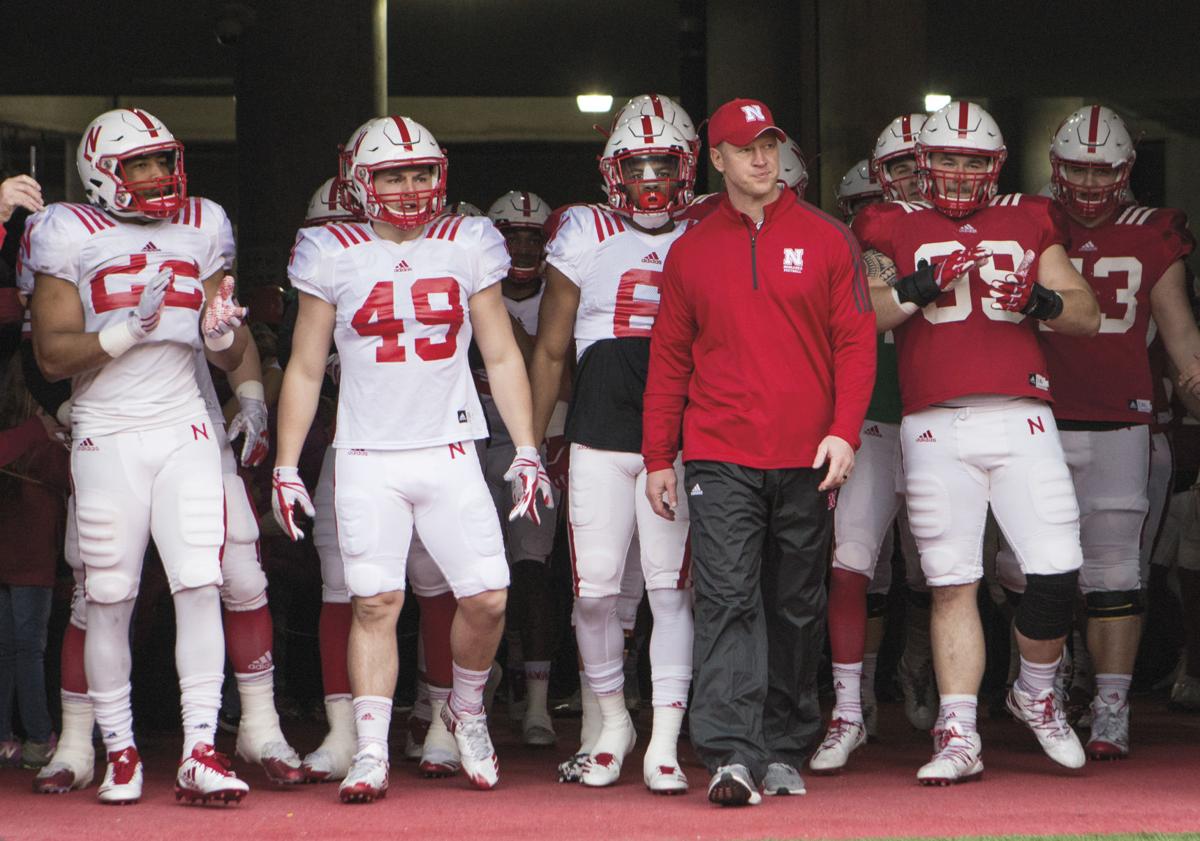 Scott Frost stands with his players before walking out of the tunnel during the Husker football spring game on April 21, 2018, at Memorial Stadium in Lincoln, Nebraska.

Scott Frost stands with his players before walking out of the tunnel during the Husker football spring game on April 21, 2018, at Memorial Stadium in Lincoln, Nebraska.

With the football program coming off its worst record since 1961 and showing no signs of getting better, a change was imminent inside Memorial Stadium last November.

The Nebraska athletic department already underwent a major overhaul just one month prior with the replacement of athletic director Shawn Eichorst with Bill Moos. The football program became the primary focus of Moos’s new regime.

“The fact of the matter is we need to raise our on-field competitiveness,” Green said. “Competing at a high level is required for the long-term success of Nebraska Athletics.”

Green, along with NU President Hank Bounds, also stated their desire of returning the football program to the prominence it held 20 years ago.

When it came time to hire a new football coach following Nebraska’s 4-8 season, the choice was obvious to everyone. Knowing the university’s desire to reclaim its former glory, the best option was Scott Frost. Not only was he a popular alumnus who quarterbacked Nebraska’s last championship team, but Frost was in the midst of an undefeated season in his second year at the University of Central Florida.

When Mike Riley was officially let go in late November, Bill Moos stated the obvious, that Nebraska’s fan base had become fractured and fragile. Years of controversial firings, administrative interference and rifts between players had taken its toll on the program.

But the moment Frost returned to Lincoln, that began to change.

Frost’s first press conference was less of an introduction and more of a gospel revival. Around 100 former players showed up to give their support to Nebraska’s new coach. His remarks were constantly interrupted with cheers. While he spoke on the second concourse of Memorial Stadium, the third, fourth and fifth concourses had people peering down to get a glimpse of their new coach.

Frost then brought it home with a line that resonated throughout the state. Asked how he would modify his system to work within the Big Ten, he quipped back saying, “I’m hoping the Big Ten has to modify their system to us."

While the Huskers have only had one spring’s worth of practices, it’s becoming clear why Frost said that. Several times, he has talked about his desire to combine the tempo and speed of modern offenses such as Chip Kelly’s Oregon with the power and strength of the Nebraska teams he used to lead.

In just two years at UCF, Frost managed to show just how dangerous that combination could be. Inheriting a winless team, UCF went 13-0, capping the undefeated season off with a win over SEC runner-up Auburn in the Peach Bowl.

While Frost lacks head coaching experience, he has spent his entire career playing for and working with some of the best coaches in the history of the game. In college alone he played under two Hall of Fame coaches, Bill Walsh and Tom Osborne. As a professional football player, he played for the likes of Tony Dungy, Mike Tomlin and Bill Parcells. As an assistant, he also worked under the likes of Chip Kelly and Bill Snyder.

Through years of development as an assistant, including six years in Oregon, Frost devised a scheme that combines the quirks of an up-tempo offense with the strength in the offensive and defensive lines that so many Big Ten teams tend to have.

The offense depends primarily on speed on the perimeter with a smart decision-maker at quarterback, as well as a strong and powerful offensive line. Conditioning to handle the faster pace has been a primary focus of the coaching staff so far, and something that many of the players have said is the toughest challenge of playing for them.

“We had always done things a certain way with the Oregon model that we took down to UCF,” Frost said. “Back in the ‘90s during the season, we’d go some live reps on Tuesday and some live reps on Wednesday, and I remember as a player how that kept us so much sharper. By the time we hit the field on gameday, that wasn’t as hard as Tuesday and Wednesday.”

On defense, Frost’s UCF teams were built to be strong and opportunistic. They allowed significant yardage, but always found a way to capitalize on mistakes.

Another key component of the program Frost built in Orlando was special teams. UCF seemed to always create their own luck through the third phase, and that was what pushed them from being a good team to being a great team. And even that was by design.

“The best teams in the country have their best players on special teams,” Frost said. “We want our best guys on the field. A lot of times, that’s a great way for a younger player to break in and start getting playing time is on special teams.”

It was no coincidence that UCF’s breakthrough moment of the season was a game-winning kick return against South Florida, one that clinched a perfect regular season and a trip to the  conference championship game.

So far, Frost has been honest regarding expectations for the upcoming season. He has said that rebuilding Nebraska will be a process and it will take time for players to learn his system and get stronger. Through spring practice, the foundation for that process was formed.

“This whole thing is a work in progress,” Frost said. “There [were] a lot of things we needed to change, fix and develop to get the team where we want it. I see improvement every day, but we have a long way to go.”

Despite early struggles, Frost said he was satisfied with how the team now understands what is being asked of them by the coaches.

“Nebraska football is built on guys that won’t quit, won’t give up, are going to be tough and refuse to lose,” Frost said. “We’ve got some of that; we need to build more of it.”

Going into his debut season, expectations are still cloudy. His first team at UCF went 6-7, albeit with a completely different situation in a smaller conference at a program with no tradition. However, a schedule that features road games at Michigan, Wisconsin, Northwestern and Ohio State will make year one in Lincoln an uphill battle.

Since his return, Frost has continuously preached his mantra of “unity of purpose.” He wants the whole program pulling in the same direction to better themselves. So far, he has succeeded in that. Players have bought into him and his staff, the administration has earned the trust of the team and staff and even the alumni have voiced their support.

Players were welcomed around facilities throughout the spring, and some practices featured over 100 former players. Nebraska alumni now playing in the NFL also voiced their support prior to the spring game, with some returning to Lincoln to watch in person and others sending messages on social media.

After a tumultuous 15 years, Nebraska appears to be united and whole again. That was something that had to happen for Frost to have any chance at rebuilding this program. If the players continue to buy in and get stronger, the on-field results will show that sooner rather than later.