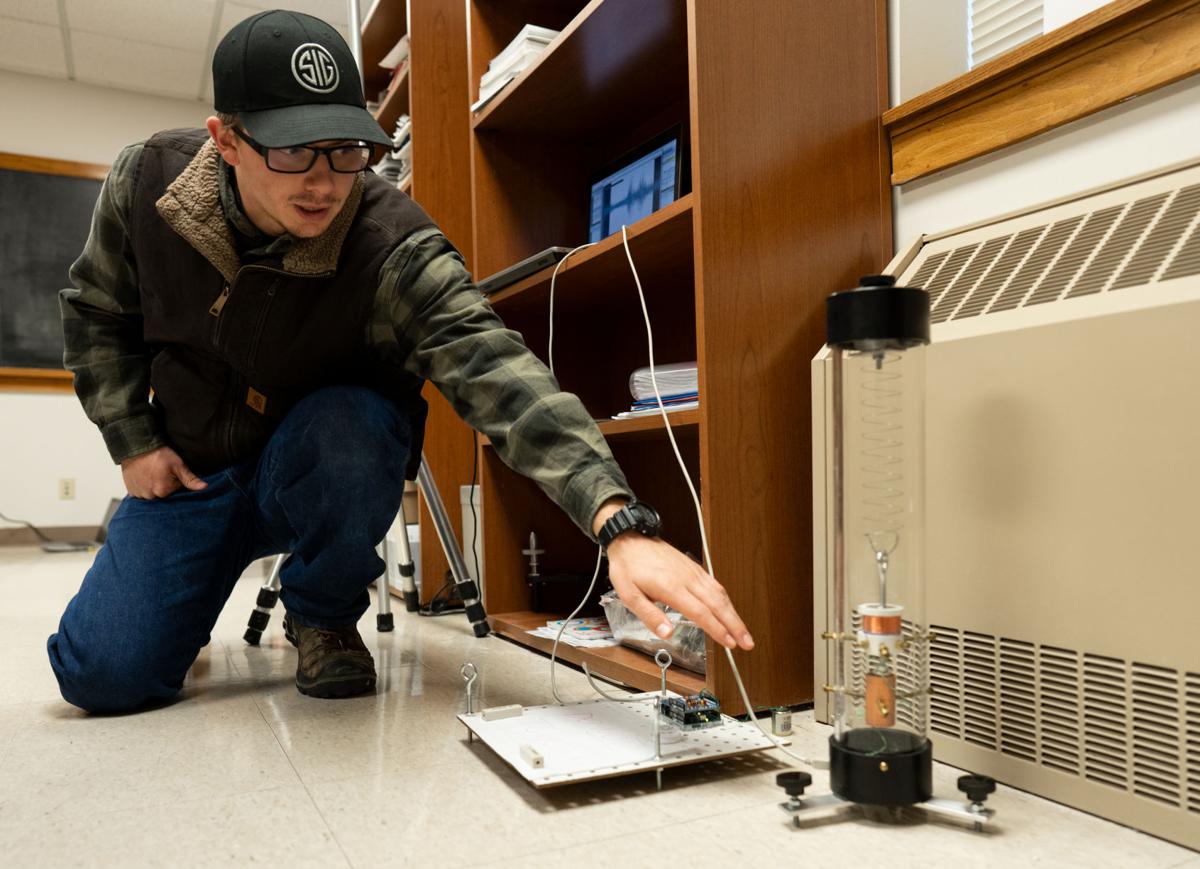 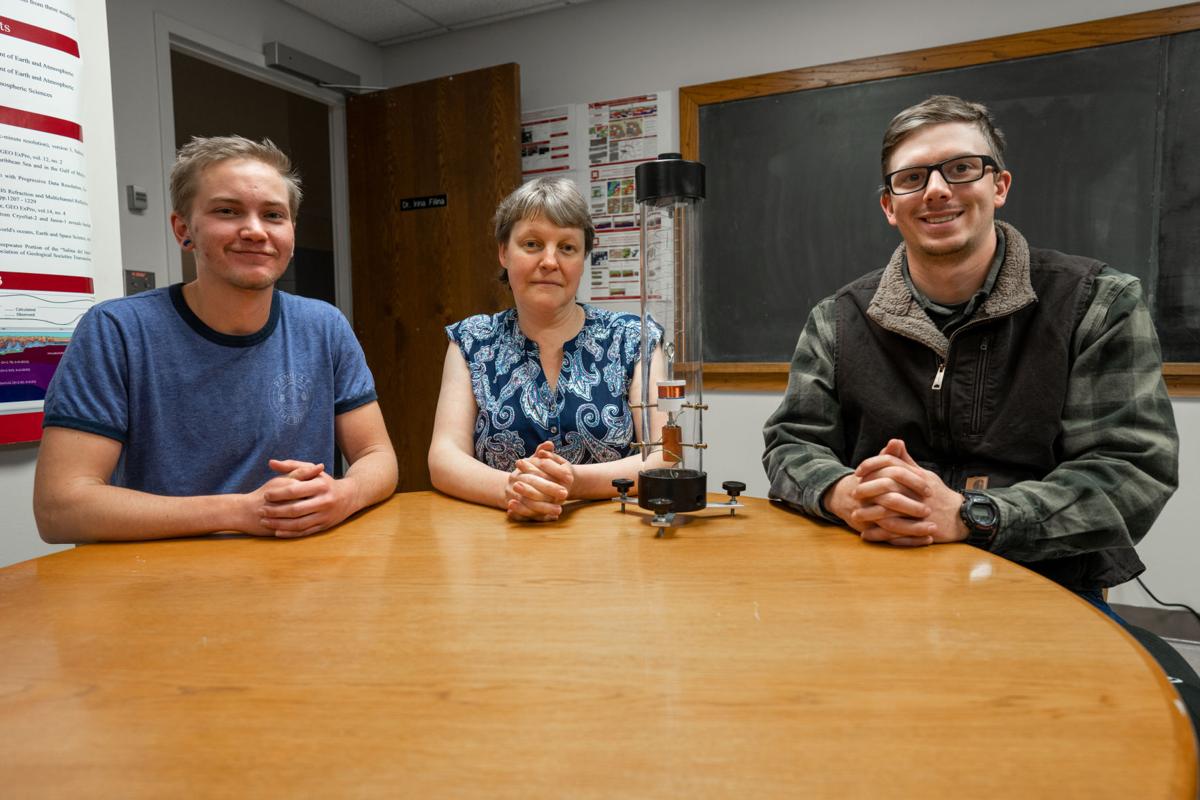 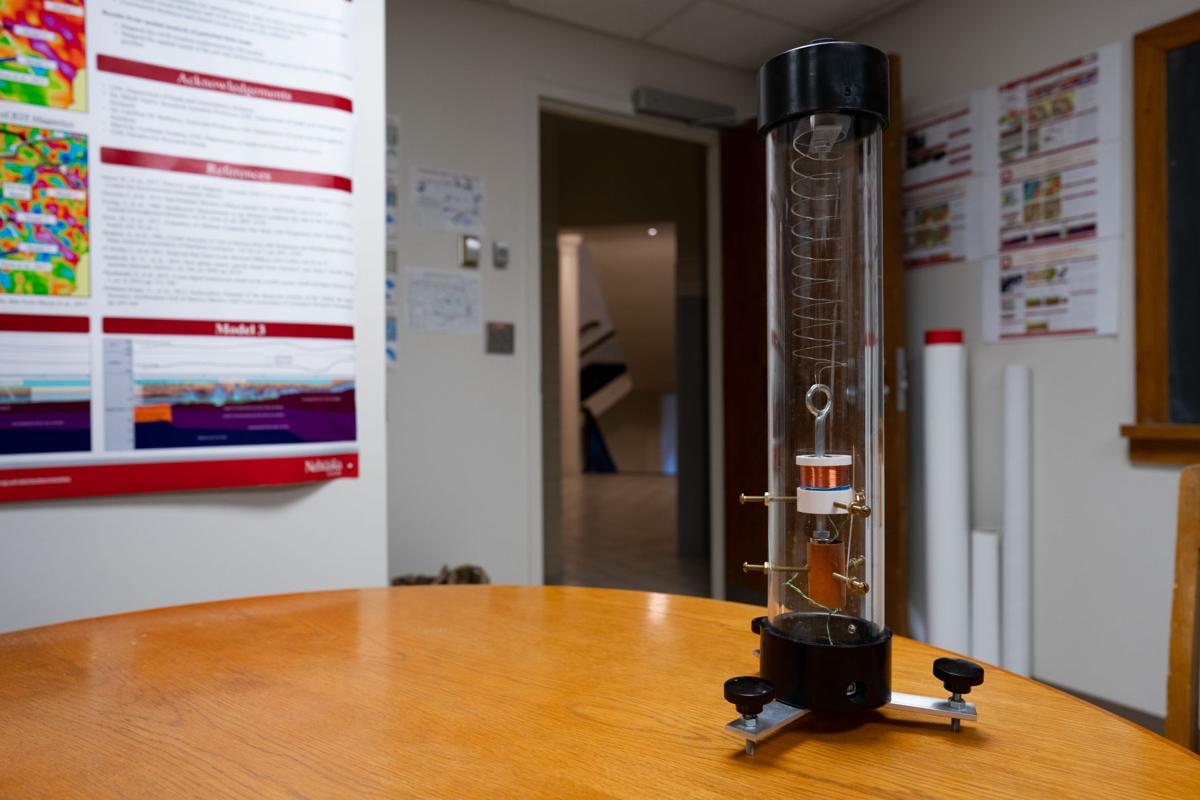 The seismometer used to measure seismicity during Nebraska football games is displayed inside of Bessey Hall on Tuesday, Dec. 3, 2019, in Lincoln, Nebraska.

A University of Nebraska-Lincoln geology class is using seismology to figure out just how much commotion Nebraska football fans create.

Students in Introduction to Geophysics brought a miniature seismometer to Nebraska football games the past four seasons in order to measure the seismic activity of fans in response to certain game triggers as well as spread awareness for the class and geophysics as a whole, according to assistant professor of earth and atmospheric sciences Irina Filina.

Filina said the volunteers bring the seismometer with them to games and set it up under the eastern column in Section 16 of Memorial Stadium. Students then record the readings and mark them alongside events in the game. The results are then displayed outside of Room 223 in Bessey Hall.

The project gives geophysics students an opportunity to learn about seismometry as well as increase their understanding of how the measuring device works and how to use it to analyze data, Filina said.

“It isn’t just outreach; [students] need to set it up, they need to carry out the experiment, they need to take very good notes and analyze their data,” Filina said. “The final part of the project is that they have to present their findings at the end of the semester. It’s a really good way of training them.”

In an observation of a Nebraska game against Purdue University on Oct. 22, 2016, Filina said the class recorded increases in motion from the crowd in terms of how much the crowd caused the stadium to rumble. They found the top cause to be when the HuskerVision screens told the crowd to get louder, followed by students jumping in unison, Nebraska scoring a field goal, Nebraska scoring a touchdown and Nebraska first downs.

Filina said the seismometer gets larger readings when the crowd jumps in unison, as opposed to individually.

Filina said the project started in 2016 when the College of Journalism and Mass Communications provided the department of earth and atmospheric sciences with a seismometer to gather data on how fans react to certain in-game events such as touchdowns, field goals and the “Go Big Red” chant.

The first recorded game was on Oct. 1, 2016. After the 2016 season ended, Filina said the seismometer was donated to the department of earth and atmospheric science. She said the project has continued annually as an opportunity for students in her class.

According to Filina, one of the main goals of the project is to spread the word about geology classes at UNL. She said the team hopes to get students and children who attend Husker games interested in geology and science in general by exposing them to the device and answering questions about it.

“Children are very interested in the device, and we want to help answer any questions they have and get them interested in science,” Filina said. “They’re our future generation.

The team consists of Introduction to Geophysics students and one non-student leader — currently senior geology major Evan Parsons. Parsons said Filina asked him to lead the project after he took the class last year.

Parsons said he hopes this project will help change the way people see geology in the future.

“We’re geology majors, [but] we don’t just look at rocks all day,” he said. “We look at the physical properties of the world and apply physics to get a better understanding of what’s going on underneath the earth’s surface, and these instruments help us with that.”

Senior geology major Kameron Daehling said the project gave him an opportunity to gain a deeper understanding of the subject and explore his interests in a fun way.

“I knew about it and wasn’t very sure, but I joined the class and had a really good time,” he said. “I’ve learned a lot about how to take notes and read the results from the device.”

Filina said the project is possible due to Matt Davidson, associate athletic director for event management, who provided the class with tickets to games and gave Filina permission to operate in Memorial Stadium.

“We are extremely thankful for what Mr. Davidson has done to help us keep the project going,” Filina said.

Filina said she hopes the project will continue in future years and inspire more people to learn about seismology.

“We want to see more people interested in science in general,” she said. “People are generally curious about the instrument at games, and we want to help feed that curiosity.”