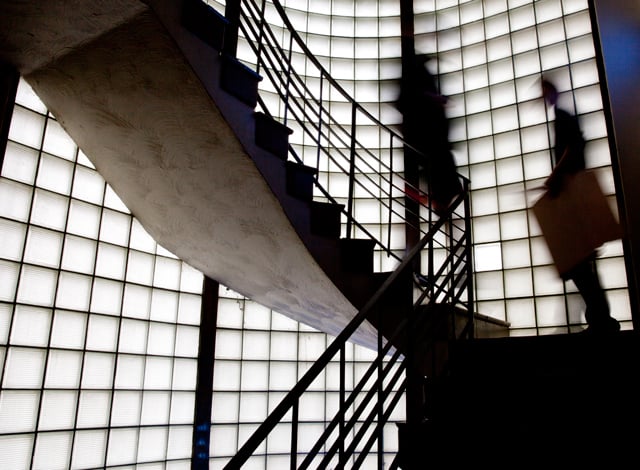 The rumor that the rounded staircase in the Phi Delta Theta fraternity was used in a Playboy shoot is true. The staircase was the location of a portrait in a 1993 issue of the magazine. 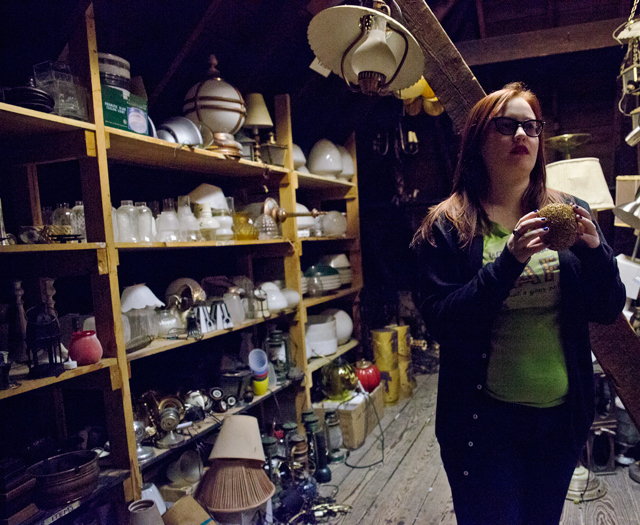 Madison Nichols, a freshman theater performance major, looks for props in the Temple Building’s prop room, located in the attic. Allegedly, the attic is haunted by a young girl who had a sandbag fall on her during a play’s rehearsal. 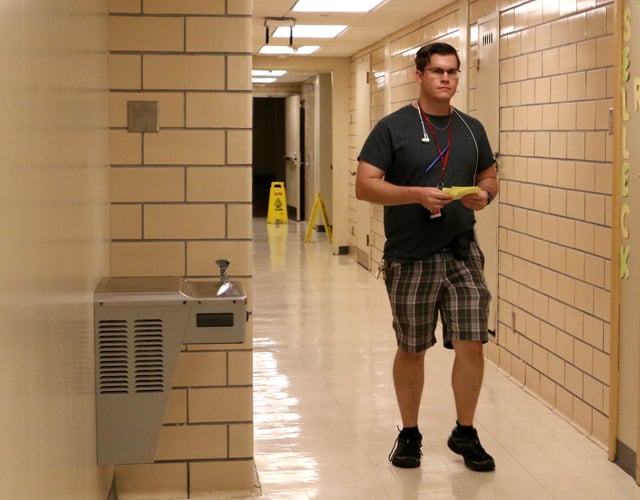 Junior civil engineering major Daniel Goodwin walks through an underground tunnel while on duty at Selleck Hall on Tuesday morning. There are rumors that the multiple underground tunnels on campus have ghosts haunting them. 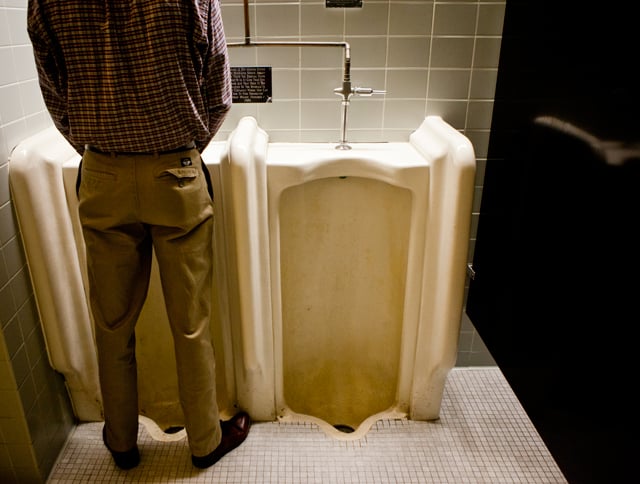 It is suspected that the urinals inside the bathrooms of Architecture Hall are the largest in the country.

The rumor that the rounded staircase in the Phi Delta Theta fraternity was used in a Playboy shoot is true. The staircase was the location of a portrait in a 1993 issue of the magazine.

Madison Nichols, a freshman theater performance major, looks for props in the Temple Building’s prop room, located in the attic. Allegedly, the attic is haunted by a young girl who had a sandbag fall on her during a play’s rehearsal.

Junior civil engineering major Daniel Goodwin walks through an underground tunnel while on duty at Selleck Hall on Tuesday morning. There are rumors that the multiple underground tunnels on campus have ghosts haunting them.

It is suspected that the urinals inside the bathrooms of Architecture Hall are the largest in the country.

The University of Nebraska-Lincoln’s Temple Building, which houses the UNL Theatre Department, has been rumored to be haunted for decades.

“I haven’t experienced anything much (supernatural),” said costume designer Janice Stauffer. “There have always been middle-of-the-night noises, but it’s also an old building, and there are a lot of loud pipes.”

And if anyone should know where the bumps in the night in the Temple building are coming from, it’s Stauffer – she has worked in the theatre department since 1979.

One of the least popular locations, even for her, is the Temple’s attic, which has remained the same since it was built in 1907, Stauffer said.

“It’s got big wood rafters and not much light … If I were a ghost, that’s where I’d want to be,” she said.

But that’s not the only place where supernatural incidents have occurred.

“A custodian that we had when we came here in the ’70s…he was cleaning the theater and the set on stage was furniture, and he sat down to rest on it for a few minutes, and a spotlight came on him,” Stauffer said. “He was working the night shift, from 11 to 7 in the morning, so it frightened him quite a bit. Sometimes (lighting) instruments have minds of their own, but he didn’t seem to think that was the case.”

One of the Temple ghosts, affectionately nicknamed Dallas after a charismatic theater chair who died during his time at UNL in the 1950s, enjoys playing games with students and staff in the theatre department.

“If something ends up somewhere without you moving it, then Dallas moved it,” Stauffer said.

Temple isn’t the only rumored haunt on campus. After Megan Hoyt of Midwest Paranormal Investigations went to check out Neihardt Hall, she determined that there were spirits among the living in the historic building.

Among the stories that Hoyt confirmed were a young woman’s spirit in a Neihardt lounge, an odd energy that makes scraping noises on the ceiling and the spirit of a young man who occasionally locks the closet door to keep the current resident out of his room.

Another building Hoyt confirmed spirits in was Oldfather Hall, where philosophy professor Hardy Jones jumped from his 10th story office to his death in 1983.

“I have seen no reason to believe that the place is haunted,” said philosophy professor Edward Becker. “But the story about the person jumping out the window is true.”

Becker knew Hardy personally and was even the executor of his estate after he passed but never thought that Hardy haunted the floor after his death.

Hoyt believed differently. During her visit to Oldfather, she confirmed there was a male spirit walking around the 10th floor, claiming he even reenacted what happened the night of his death.

But not all rumored haunting areas prove so active. After assistant director for Residence Life Rob Andrews, as well as multiple residents of Abel’s seventh floor – including a student who has lived on the floor for two years – said they had never even heard of the floor being haunted, so the conclusion is Abel 7 has no resident ghosts.

Some of Neihardt’s ghosts, including the young woman whose spirit lingers in the lounge, are believed to be there because of Neihardt’s use as an infirmary in the 1930s and 1940s. During this time, an outbreak of polio caused many people to be placed there, including some of the spirits that are still there today. According to tourtheten.com, the ghost of the young woman – which Hoyt confirmed – rattles the shutters of the lounge’s windows because at the end of her life, her illness kept her from spending time outdoors. So perhaps living in a once-infirmary is just as spooky as it sounds.

You know those grates in the sidewalk that you’re irrationally afraid to walk over? Turns out that they’re actually the only thing keeping you a safe distance from UNL’s underground tunnel system.

According to Facilities Operations Manager Kelly Clark, all the buildings that use steam utilities on campus are connected by a series of tunnels that are occasionally used by maintenance workers who have to fix the steam pipes. Some of the tunnels go all the way to the Capitol building.

“Parts of them (are big enough to walk in),” Clark said. “But you can’t make your way around down there.”

Though it’s fun to imagine yourself springing up into your 9:30 a.m. class via a secret underground tunnel, they’re not built for people to travel from building to building. On top of that, the steam that rushes through the pipes the tunnels house is incredibly hot, making that underground walk to class not only sweaty but incredibly dangerous.

“Going down into those is the kind of thing that could get you expelled,” Clark said.

Among other rumored secret passageways are the “portals” between desks in Abel Hall. Though you could theoretically find and crawl through one of the few larger spaces between dorm rooms that are concealed by the plywood kick-plate under your desk, it wouldn’t be easy. Finding one of the dozen or so spaces large enough for a person to fit in would be your first challenge, followed by somehow obtaining a special screwdriver to remove the security screws the kick-plate is put in place with. Even if you managed all of this, you’d probably get fined (or have to do community service) for damaging your room.

According to Nebraska Alumni Association spokeswoman Andrea Cranford, the Hinsdale urinal in the bathroom of the Architecture Hall is the oldest and largest urinal west of the Mississippi River. Its only competition is another Hinsdale located in the Old Town Bar in Manhattan, N.Y.

“I’ve heard about that for decades,” Cranford said.

Though the Hinsdale was not an original part of the building (the hall was built in 1894 and Hinsdales weren’t patented until 1910), they are still considered a university landmark.

Even if they are not officially the country’s largest, the Architecture Hall’s famous urinals are impressive enough to be acknowledged by the Scarlet Guard.

“(The Hinsdales) are listed as a campus tradition in our Cornhusker compass, which is our tradition handbook for members of Scarlet Guard,” Cranford said.

It’s up to you to decide if it’s worth the trip to the architecture building to put them to use, though.

You can’t miss the lit-up, glass staircase on the side of Phi Delta Theta’s house when you walk down Greek Row. With its 1930s limestone architecture, it stands out among the rest of the Greek houses.

Geoff Thiele, senior biological sciences major and president of Phi Delta Theta, said he thinks that’s why Playboy Magazine wanted to have a photo shoot at the fraternity’s house back in the 1990s.

“My guess is they walked by the house and saw the staircase light up and thought it was cool,” Thiele said.

In the house library, the fraternity has an old copy of the magazine. Although the cover wasn’t directly affiliated with Phi Delta Theta, it was connected with UNL. At this time, Playboy was taking cover photos of the Big Eight schools. The UNL cover was Homecoming-themed and featured people in dresses and suits on the stairs.

“Yes, the rumors are true – but it wasn’t what you would think of a Playboy photo shoot,” Thiele said. “There isn’t any nudity on it, and there aren’t any Phi Delts in it.”

It’s rumored that if you throw yourself in front of a bus on campus, you get free tuition, and if your roommate commits suicide in your room, you get free room and board.

But according to Tim Alvarez, assistant vice chancellor for Student Affairs, the rumor is false.

“I’ve never even heard of that rumor before,” Alvarez said. “It’s a little bizarre, but I guess that’s why they’re called myths.”

It’s the one that caused Sir Isaac Newton to discover gravity. And there’s a tree on campus that’s genealogically related to that specific tree causing what could arguably be one of the most pivotal moments in scientific history.

According to an article produced by the Spectrum, a newsletter for alumni and friends of the Department of Physics and Astronomy at UNL, the tree was brought to Lincoln in the late 1980s. It all started with Edward Layman, a retired Lincoln physician, and his friend Joseph Young, a retired UNL horticulture professor. They were curious about what variety of apple was involved in Newton’s discovery and contacted Richard Keesing, a professor at York University in England who had avidly studied the life of Newton.

Keesing contacted the then estate owners of Newton’s home and was able to identify an apple tree that was remarkably similar to the one in Newton’s time – a spawn of the previous tree. A graft of that tree was made and shipped to Lincoln.

It was planted in its permanent spot south of the Behlen Laboratory on April 4, 1991, at a ceremony attended by Keesing, and it’s still there today.

The story goes that one time, before the era of cellphones, someone got stuck in the bell tower, and he was only let out when he played, “Help!” by The Beatles.

According to New Student Enrollment officer Luke Castner, a junior elementary education major, part of that story is true.

“I know for certain – this is what our boss told us – somebody did get stuck in the tower, but it was well before The Beatles existed,” Castner said.

There’s no evidence as to how the victim got out, but with a strict maintenance schedule, the person did get out eventually.