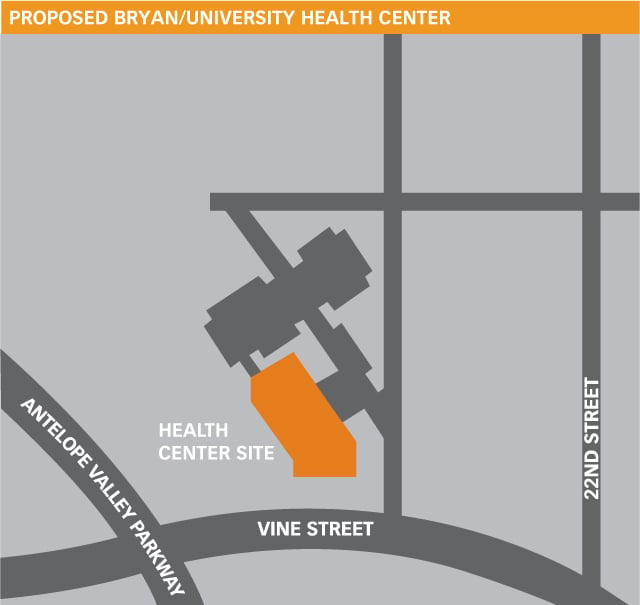 Bryan Health would build a new, two-story $14.4 million University Health Center at the University of Nebraska-Lincoln by Aug. 1, 2014, according to the company’s bid proposal submitted to UNL in early October.

The new health center would replace the current health center, which was built in 1957. On Sept. 11, UNL Chancellor Harvey Perlman announced the university would seek bid proposals, citing the need for a new building without raising student fees and questioning whether the university should be in the health care business. The bid, obtained by the Daily Nebraskan through a Nebraska Public Records request, outlines what a new health center at UNL would look like and how it would function under the care of a private provider.

“The Bryan Health team is very excited about the potential of combining the services of the existing University Health Center, with its deep commitment to student health, with the medical resources of Bryan Health,” Bryan Health President and CEO Kimberly Russel said in a letter at the beginning of the bid. “Together, we believe we can build an even stronger Health Center that will focus our collective talents to serve the student population in new ways.”

Bryan Health, the lone bidder for the development of the health center, will present its proposal to faculty, students and health center staff at sessions Tuesday and Wednesday.

Using its internal funds, Bryan/University Health Center would build the new 40,625-square-foot building on 4.9 acres of university land at 22nd and Vine streets, currently the southwest corner of the Textron site, the bid said. The partnership would last a minimum of 35 years, and after 50, the building would become university property, the bid said. The new health center would retain current employees for at least one year and would also be home to Counseling and Psychological Services (CAPS).

Bryan would pay the university 10 percent of the center’s net operating income each year as the ground lease payment, amounting to $105,737 over a five-year period.

Student health fees, which account for more than two-thirds of the projected income, would be frozen through May 2015, according to the proposal. After that, they would be adjusted based on inflation, which Bryan calculates to be about 3 percent. In a projected outlook, student fees increase an average of 4.3 percent in years 3, 4 and 5.

In its first two years, the center would operate at loss, according to the bid. Also, the center’s second-year projection shows a cut to salaries and benefits of about $566,716, indicating several employees would not remain with Bryan.

CAPS would be maintained by the university and would lease approximately 3,700 square feet in the new health center at $18 per square foot. CAPS does not pay to lease its space and how the university would pay for its leased space in a new building remains unclear.

UNL Chancellor Harvey Perlman said, “No final decision has been made on this, but it would be taken into account in evaluating the bid.”

“Making sure they’re in check is one of my biggest priorities,” said Kamler, a senior agricultural economics major.

Under Bryan, the new center would provide the same services offered by the current health center, and according to the bid, services could be expanded to include:

-drug and alcohol screenings and evaluations

“Irrespective of any changes considered, we will continue to offer family planning, birth control, and health education services,” the bid said.

Dental space has also been projected for the new center, and the University of Nebraska Medical Center College of Dentistry has expressed interest in partnering with Bryan Health to provide dental services, the bid said.

This week’s sessions should allow university students, faculty and staff a chance to ask questions of Bryan regarding its proposal, Bartling said. Once the presentations have been held, the evaluation committee will decide whether to proceed to contract negotiations, and an agreement may come before the University of Nebraska Board of Regents in January.

Kamler encouraged students to attend Bryan’s sessions Tuesday and Wednesday, saying the presentations would finally allow “students the chance to see what (Bryan’s) offering and hoping to do on campus.”

- All services offered by current health center maintained, some expanded

- Student fees would be frozen through May 2015