Nine women filed a lawsuit against the University of Nebraska-Lincoln on Monday, alleging Title IX violations by the university.

The lawsuit alleges that UNL mishandled sexual assault and harassment complaints dating back to 2015, including accusations against at least five Husker athletes. UNL’s Office of Institutional Equity and Compliance committed “numerous violations” of the plaintiffs’ rights, according to the lawsuit. 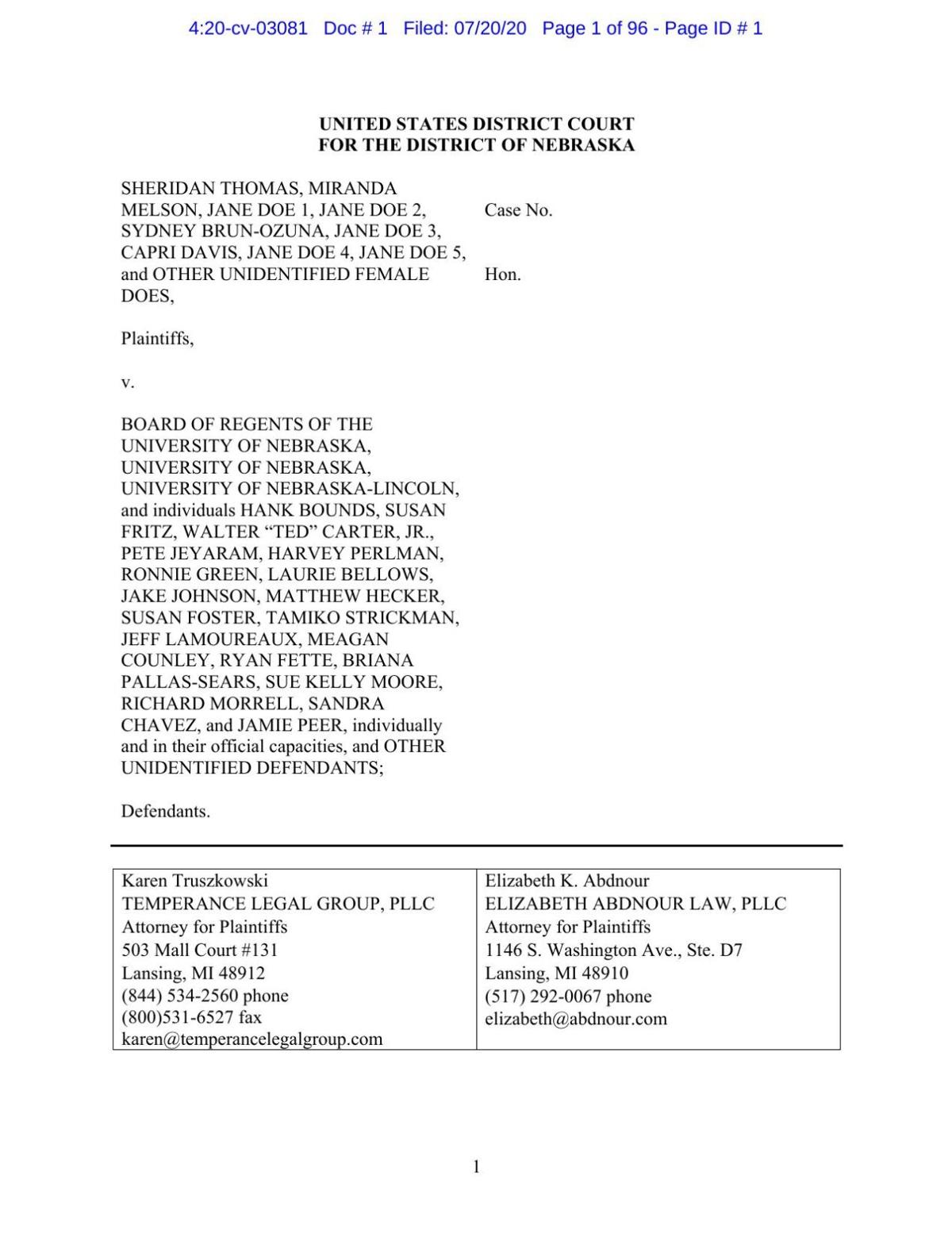 Of the four plaintiffs named, two, former Nebraska volleyball player Capri Davis and former UNL student Sheridan Thomas, were involved in a lawsuit against the NCAA in April which accused UNL of protecting male athletes accused of sexual assault.

Davis, who played for Nebraska volleyball from 2018-2019, transferred to the University of Texas at Austin in December 2019. Both lawsuits say Davis and another unnamed student-athlete were groped without consent by two Husker football players in the spring of 2019. In April 2019, the two reported the incident to IEC.

According to the lawsuit, IEC did not launch an investigation or contact them again, even after a faculty member reported the incident to IEC. After a third report in fall of 2019, IEC launched an investigation.

Davis and her friend then went to a Halloween party in October, where two football players confronted them regarding the report. This incident was reported as well but not investigated, according to the lawsuit.

Throughout the process, IEC only communicated with the unnamed student-athlete, and not Davis, according to the lawsuit.

Davis’s friend also reported being raped by the two players in 2018, but the lawsuit states no findings were made in the investigation.

Thomas alleges she was raped by a UNL student-athlete in 2015, according to the lawsuit. She says she was then sent harassing text messages by her rapist and another student-athlete. As a result of the emotional damage from the incident, the lawsuit states Thomas sought assistance from IEC to withdraw from a class.

According to the lawsuit, then-Title IX coordinator Tami Strickman told Thomas IEC could not help with her request unless she filed a formal complaint against her alleged rapist and a Title IX investigation was initiated. UNL’s Student Code of Conduct states that “persons who have been subjected to sexual conduct may be able to receive assistance from the university, regardless of whether a charge or report of any kind is filed.”

In April 2016, IEC determined that the student-athlete’s version of events aligned “more closely with the evidence provided by the parties.” Thomas was notified of this through a letter, which included factual errors such as claiming she made contradicting statements during the interview process, when she had not said either statement, according to the lawsuit.

Additionally, the lawsuit states that the letter did not address much of the information Thomas had provided and did not include evidence that any of her witnesses were interviewed. Thomas appealed the findings, but the appeal was denied.

Among the other claims, the lawsuit states Strickman canceled multiple meetings with one plaintiff who had reported to IEC that she was raped by another UNL student. Additionally, Strickman recorded her interview with the male student and interviewed his witnesses, while not doing the same for the plaintiff, according to the lawsuit.

Jeff Lamoureaux, a former IEC investigator, was allegedly complicit in the harassment and stalking of another plaintiff. In 2017, the plaintiff had received excessive unwelcome text messages and other forms of contact from her ex-boyfriend. Lamoureaux told the plaintiff that her ex had contacted him twice, asking if it was possible to “work things out” with the plaintiff, according to the lawsuit.

The plaintiff continued to face harassment throughout a difficult process with the office, according to the lawsuit.

“The Title IX investigation, hearing and resolution process was much more stressful than the stalking she experienced,” the lawsuit states.

In another case listed in the lawsuit, an unnamed plaintiff was raped by two UNL students in December 2018. In February 2019, the same plaintiff was allegedly raped by one of the football players involved in Davis’s report.

The plaintiff decided to report the incident to the Lincoln Police Department after another female student who was allegedly raped by the same football player told the plaintiff that IEC had sent information about her case to the wrong student.

This is a developing story.