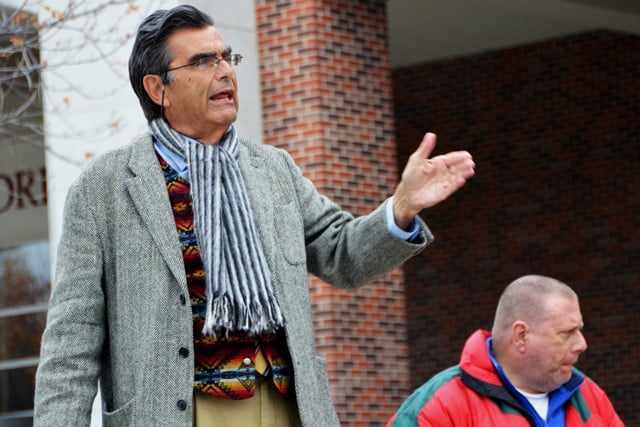 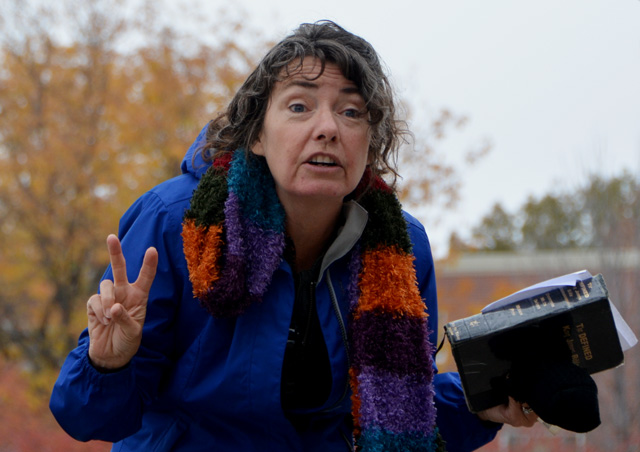 Wife of Jed Smock, Cindy, preaches to students about their 'sinful' ways.

Wife of Jed Smock, Cindy, preaches to students about their 'sinful' ways.

A pick-up line for the ages, but it worked – and the two now travel the world to preach to university students about the dangers of a promiscuous life. They were outside the University of Nebraska-Lincoln Nebraska Union this week.

“Sex, drugs, booze and rock-and-roll,” he said. “They all go together.”

Response to their sermons can range from uncooperative to hostile, but with his wife of 29 years by his side, Smock feels ready for whatever comes.

“I’m used to hearing just about anything,” Smock said of his young crowds, but he added he is pleased when people take offense to some of his statements. That means they’re listening.

“I don’t take it personally,” Smock’s wife Cindy Smock said. “We know we are pushing their buttons.”

Smock’s road to the promised land has taken its fair share of twists and turns along the way. Formerly a college history professor at the University of Wisconsin La Crosse, Smock said he wasn’t always a stand-up Christian.

He was a student in the ‘60s and quickly fell in to a generation of young people who merged social revolution with recreational drug use, he said. By way of a Crosby, Stills, Nash and Young song titled “Marrakesh Express,” Smock found himself living in a “hippie commune” in the North African country of Morocco.

The song was written about a Moroccan city where one of the band members had traveled and became somewhat of a “free love” oasis in the late 1960s.

“You could go to Marrakesh and you could score hash,” Smock said. “It became the place to go.”

Then at a Christmas party in 1971 that featured “lots of dope and wine” Smock saw a man parading through the crowd carrying a cross. He was pleading the stoned masses to repent of their sins, and he caught Smock’s attention.

“Despite all my education, I had never read the Bible,” Smock said.

This chance encounter was enough to persuade Smock to pick up a copy of the Bible, which lead to an official conversion to Christianity in August 1972.

Smock began preaching full time in 1974, and in 1977 he made a trip to the University of Florida, where his future wife was studying journalism.

Jed Smock picked Cindy Smock out of the crowd during his lecture for a personal lesson on the hazards of her lifestyle. She didn’t mind at all.

“I liked the attention and went home and told all of my friends,” Cindy Smock said. “We thought it was the best entertainment on campus.”

Yet, his message kept her thinking and when the preacher returned to campus the next year the two had dinner together. Fast forward five years, and Cindy Smock was a devoted Christian and married to the man she had once berated.

“His life of holiness convinced me Jesus was real,” she said.

The couple have since raised five children and spoken on campuses in all 50 states, as well as in England and Scotland.

They drew crowds of varying sizes at UNL, and while the student response was often negative, most listeners did not disagree with their presence on campus.

“I enjoy debating and I enjoy other points of view,” said Wade Bradley, a sophomore secondary education and natural science major.

Bradley was around for much of Smock’s sermon Tuesday and often engaged in the conversation. At the end of the day, Bradley said he has no problem with Smock speaking.

“He has his opinion, and that is his right,” Bradley said.

Senior anthropology major Kesha Henske said she tries to at least stop for a few minutes and listen whenever she sees someone like Smock on campus. She disagrees with Smock’s views but believes there is something to gain from the experience.

“I think it’s great,” she said. “It gets people talking and makes them aware.”

This is the Smock family’s goal. Not to convert every college student, but to simply get the word out about what a life with God can hold.

“When we’ve been on campus a couple of days, people are talking about what we’ve said,” Smock said.

Standing in front of anyone who will listen, wielding a crossed staff reminiscent of an Indiana Jones movie prop, Smock continues to preach his message.

“It is the duty and responsibility of every Christian to share the faith,” he said. “It is what God called me to do and it is needed.”

The first words Jed Smock ever said to his wife were “repent of your sins, you wicked woman.”