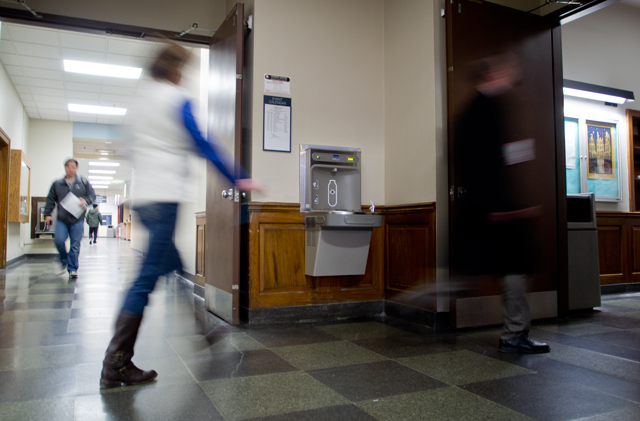 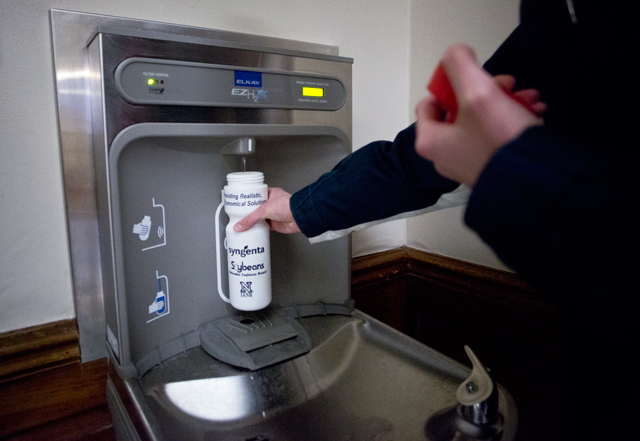 Lauren Wielage, a senior agriculture business major, fills her water bottle at the new fountain in the back of the Nebraska Union on Monday. The fountains keep track of how many plastic bottles it saves by filling reusable bottles.

Lauren Wielage, a senior agriculture business major, fills her water bottle at the new fountain in the back of the Nebraska Union on Monday. The fountains keep track of how many plastic bottles it saves by filling reusable bottles.

During Winter Break, maintenance crews at the University of Nebraska-Lincoln installed 16 new, sensor-activated water bottle fountains across campus in what the fountains’ proponents call a pledge to leave a more responsible ecological footprint.

“Our goal was to decrease the amount of water bottles people use,” Bergt said.

The machine’s design allows users to insert any water bottle and receive a stream of filtered water without pressing a button.

Manufactured by Elkay, the fountains have what’s called a “green ticker,” which tells the user how many disposable bottles are being saved with use of the system.

Nebraska Unions Director Charlie Francis said there’s plenty of excitement about this feature because it “helps to reinforce (the idea) that, yeah, that’s one less bottle going into a landfill.”

The fountain at Landscape Services went in first, right before break, and Bergt said it has saved more than 530 bottles.

Total water bottle sales hit 9.1 billion gallons in 2011, which is about 29.2 gallons per person, according to Beverage Marketing Corp.

Bergt said Landscape Services and Recycling got a $22,000 grant to pay for them. They previously received a grant for reusable water bottles as “incentives for recycling,” which students could get through events.

The total cost for the project is around $55,000, and what’s not covered by the grant will be split between Nebraska Unions and Facilities Management and Planning, Bergt said.

The fountains have garnered “quite a bit of support around campus,” said Matan Gill, the Association of Students of the University of Nebraska’s Environmental Sustainability Committee chair.

Francis said the university and ASUN committee like to “think in terms of sustainability and what we can recycle, and (find) equipment (that will) use less power and resources.”

“These (fountains) are a good example of that,” he said.

Gill, a senior construction management major, looks forward to fostering a “culture change on campus,” and he said he thinks the fountains will help.

“The more students are educated, the more they’ll help,” he said.

Gill has had his reusable bottle for six years, and he admits it was difficult to fill it adequately in a regular fountain because of the bottle’s size.

Now there’s a fountain right down the hall from Gill’s office in Nebraska Hall. He believes when students fill their water bottles with clean water, it gives them a sense of satisfaction.

“It’s fun to do, and I think it encourages people to get (a reusable) water bottle,” Gill said. “You feel like you’re doing some good.”