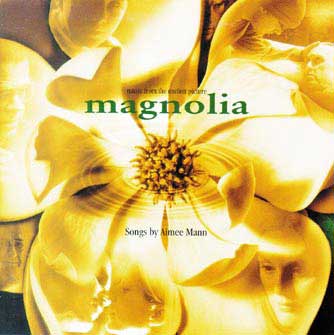 In the liner notes to the "Magnolia" soundtrack, P.T. Anderson, the director of the film, writes, "I sat down to write an adaptation of Aimee Mann songs. Like one would adapt a book for the screen, I had the concept of adapting Aimee's songs into a screenplay."There's no doubt the soundtrack and the film are closely linked. But "Magnolia's" soundtrack doesn't need a memorable movie moment to register with listeners.All the credit here goes to Aimee Mann, who wrote three-fourths of the album. In fact, this may as well be an Aimee Mann EP.For starters, Mann delivers a chilling cover of Harry Nilsson's "One." "One is the loneliest number/That you'll ever do."Isolation rings through Mann's voice and right away, we know we're listening to a singer we can trust. At the same time, the listener is drawn in because, as depressing as it may be, this is a catchy song.Mann takes the rapport she establishes in the first song and keeps the listener moving along with the music, even as she's playing tricks with her vocal style. "Momentum" runs immediately from the first track and into a jazzy number with Mann's powerful voice. Here the subtle beauty of her song-writing comes out. On the first listen, one would think the song has a motivational message. Not so. Mann writes, "And so, for the sake of momentum/I'm condemning the future to death so it can match the past."From here out, Mann weaves simple, yet brilliantly articulated lines throughout each song. P.T. Anderson sums it up well again in the liner notes when he writes, "She writes lines that are so simple and direct that you are convinced that you have either A) heard it before, B) said it before, or even C) thought of it before (and just never wrote it down)."For instance, a line from "Build That Wall:" "She's been a long time on the phone/Courting disaster with an undertone." Or from "Deathly:" "Now that I've met you/ Would you object to /Never seeing each other again." Little surprises like these are tucked away in just about every line Mann writes.Equally as notable is the subtle, yet diverse ability of Mann's voice. Each song lets us in on another vocal capability. The eerie tones in "One," the strong show-tune vibrato of "Momentum," the lilting sincerity of "Build That Wall" and the collected and yet in-your-face warning of "Deathly" all lead us in different directions.In the first part of the album, Mann's lyrics are somewhat self-loathing, and a depressing tone sticks throughout the album. But the lyrics are contrasted by an admonition Liz Phair-style in "Deathly:" "I can't afford to/Climb aboard you/Nobody's got that much ego to spend." Instead of abandoning the trust we have in her as a songwriter, Mann's complexities come out, and we appreciate her ability to represent a variety of emotional states.The second portion of the album abandons the confessions of the first and takes on a different tone, yet again displaying Mann's chameleon abilities. The second portion is more like an advice column written without the cheese. Mann's tone switches accordingly, and here is where we really get a true singer and songwriter feel from her music. Following in the tradition of Carol King, Mann's voice carries us through the emotional turmoil.Mann's final track on the album, "Save Me," culminates in the gorgeous voice, witty lyrics and natural melodic sense we hear in all of her songs. This one is sure to stick in anyone's head.The drawback to the "Magnolia" soundtrack is the songs written by other people than Mann. Not to say that these songs are bad, they simply don't fit the mood Mann establishes. Supertramp contributes two tracks in its hike-up-your-shorts '70s falsetto (nothing like the honesty in Mann's voice).And then there is the awful track, "Dreams," by Gabrielle. Its corporate-pop sound is like sticking Brandy and Monica on an Ani DiFranco album.Although these songs don't fit Mann's mood, those who have seen the movie will probably understand their meaning and forgive the album for their inclusion.My guess is that with all of "Magnolia's" publicity and success, Mann will get swept up in the attention. And deservedly so - this is one of the best soundtracks made since "Reservoir Dogs," but with a lot more emotion and creativity.