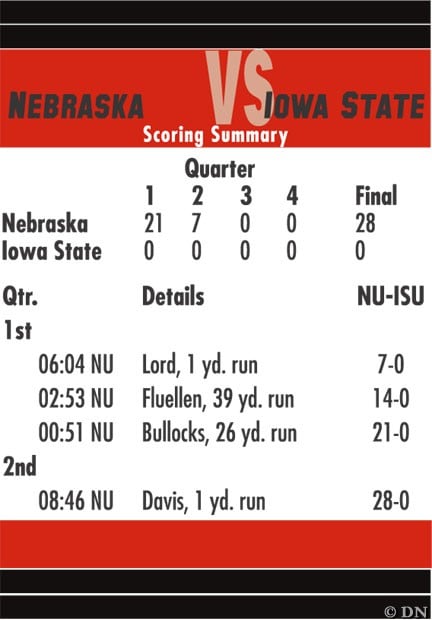 Josh Bullocks took the end of his streak pretty well.

The sophomore safety failed to intercept a pass for the first game all season, but took solace in playing a part of Nebraska's two biggest plays Saturday.

Bullocks blocked one punt and returned another blocked punt for a touchdown in NU's 28-0 win over Iowa State in front of a Memorial Stadium crowd of 77,483. With their win, the Huskers moved up two spots in both polls to Nos. 8 and 12.

The win marked the Huskers' most spectacular special teams performance of the year and it came on a day when the offense struggled to find its legs.

The Huskers used a massive field position advantage to put three of their touchdowns on the board. Bullocks blocked Cyclone punter Tony Yelk's second kick of the day, setting up NU at the ISU 19-yard line. Lord's 1-yard keeper on fourth-and-goal put the Huskers up 7-0.

"We had a block called on my side," Bullocks said. "I was supposed to go underneath the wing, but instead I went outside. I saw I had a chance so I just stuck my hand out."

Linebacker Demorrio Williams victimized Yelk again with 51 seconds left in the first quarter, breaking through the left side of the Cyclone line to get a hand on Yelk's kick. Bullocks scooped it up and raced 26 yards into the south end zone for his first career touchdown. NU's two blocked punts were its first all season.

"We've had punt blocks on before today, but we emphasized it this week," NU Coach Frank Solich said. "We said how we hadn't had any punt blocks this season, and that's not how we have typically operated on special teams."

Nebraska's scoring was capped by a 39-yard reverse from redshirt freshman receiver Isaiah Fluellen and a one-yard plunge from Josh Davis. Fluellen led all rushers with 78 yards on five carries. Nebraska's average field position on its three touchdown drives was the Iowa State 40-yard line.

Conversely, the Cyclones got no farther than the NU 42 until its final drive of the game. Iowa State was held to 230 total yards by the Blackshirts and was shut out for the first time since a 41-0 loss to Kansas in 1991.

"You always want that shutout, that's a pride thing," said linebacker Barrett Ruud, who recorded a team-high 12 tackles. "It's a statement for the defense. Especially when you're winding down the game, you never want to give up a shutout."

The Cyclone defense also was able to stymie NU after Lord was replaced by Dailey with 7:35 remaining in the second quarter. The Huskers gained 150 yards on the seven drives led by the freshman and committed 10 penalties. The lone potential scoring chance with Dailey at the helm ended with a David Horne fumble in the fourth quarter.

Offensive Coordinator Barney Cotton said Dailey's most extensive action of the season was a result of the coaches wanting to give Lord a rest. Solich said Lord had been less than full-strength for the past few weeks.

Solich assessed Dailey's play as "OK," but was confident the freshman is taking steps toward improvement.

"I think it was very valuable for him," Solich said. "He got a lot of experience in this ball game. I think he'll only get better as he gets playing time."