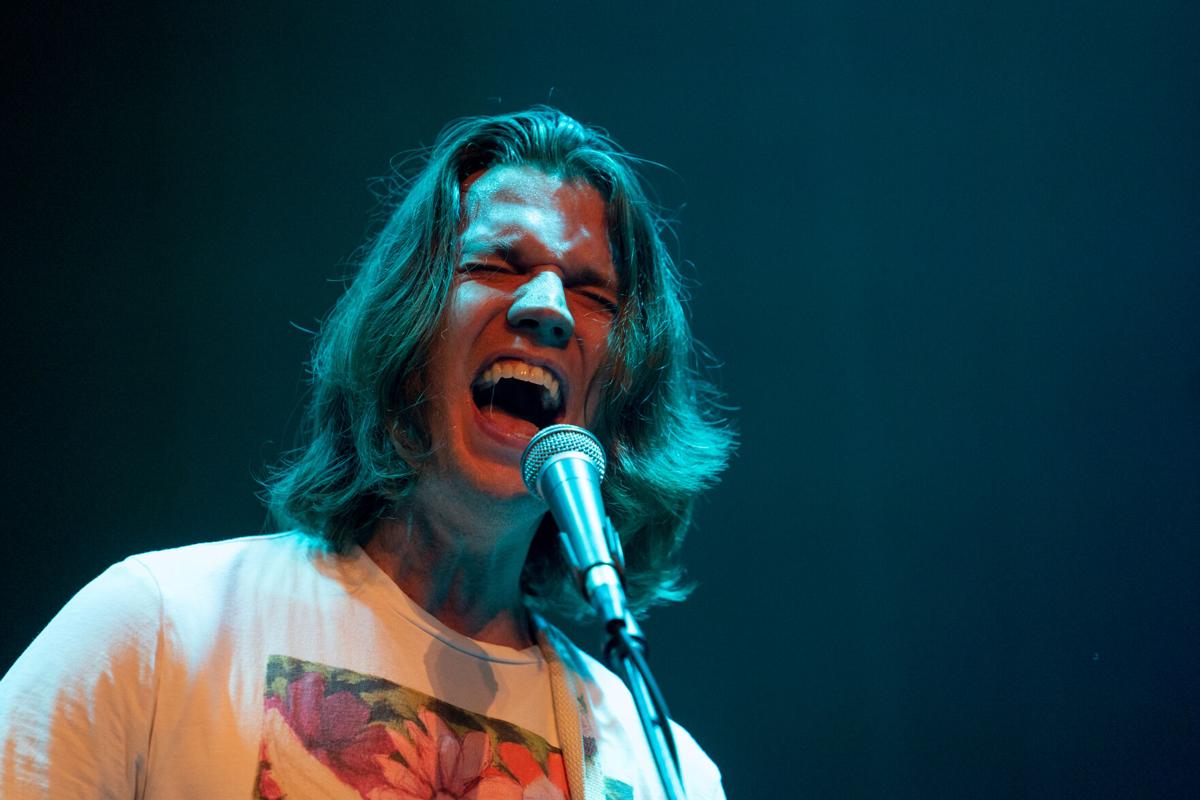 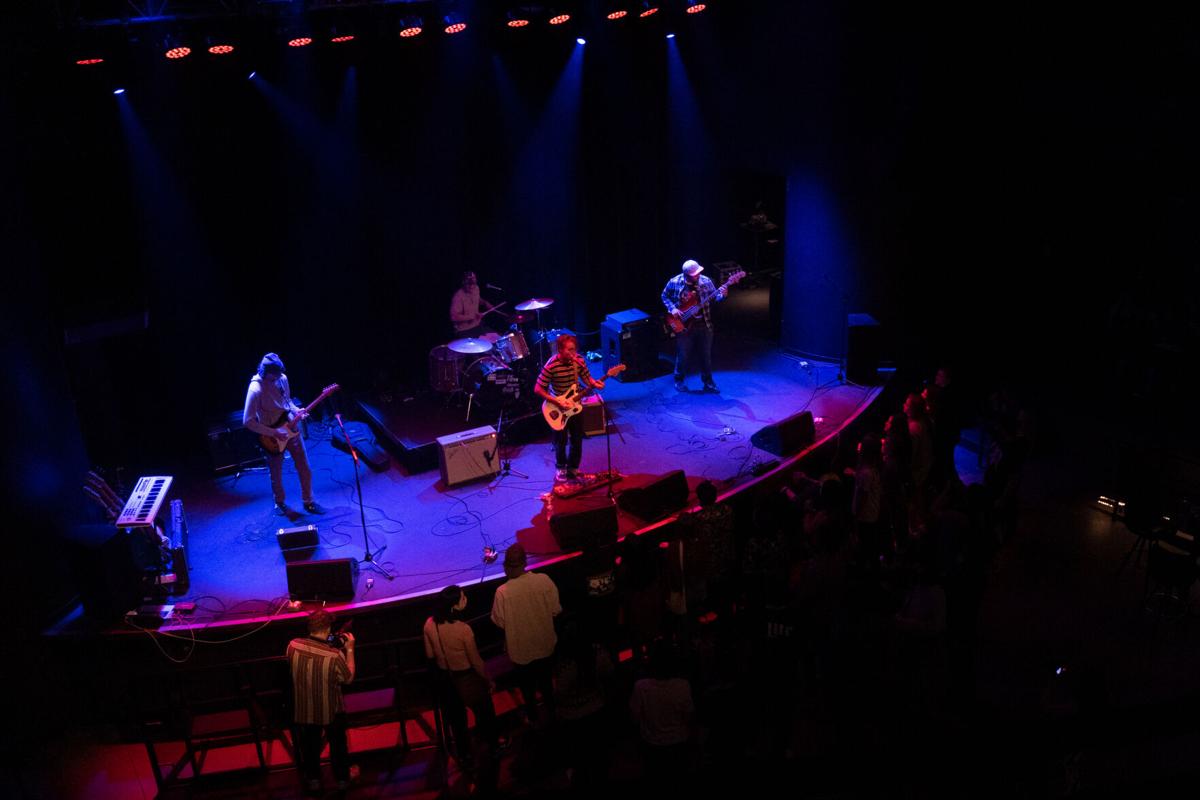 The Credentials perform at Slowdown on Friday, May 14, 2021, in Omaha, Nebraska. 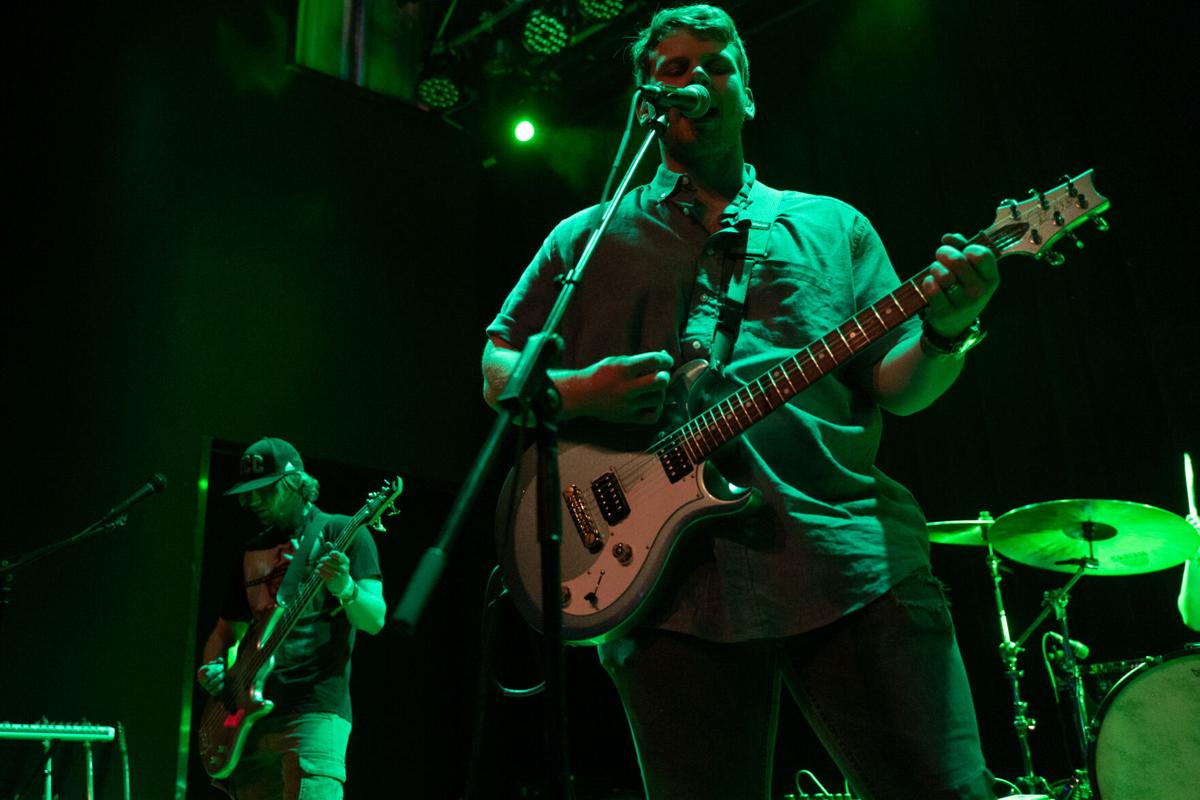 A Band Called Hemingway performs at Slowdown on Friday, May 14, 2021, in Omaha, Nebraska.

The stage lights came up blue at The Slowdown as most audience members prepared to enjoy the first live indoor concert they’ve attended in over a year.

On May 14, three Lincoln bands — A Band Called Hemingway, The Credentials and The Zooeys — traveled an hour to downtown Omaha to perform for dozens of fans.

The Zooeys headlined the show, and began their set strumming their guitars off stage and running on one by one. Once drummer Cole Yeager, bassist John Douglas, guitarist Cody Hagen and guitarist and vocalist Zooey Rudd were ready, they launched into “Faeries,” a light and fast tune matched by the stage’s pink lights. When the song ended, the band began “Seven More,” a heavier song with descending melodies that showed off the group’s classic rock influences. Their next song “Nothing but the View” was similarly inspired, only faster.

Then, Rudd took a moment to thank the crowd, The Slowdown and the opening bands before saying, “This is our song about the circus.” As the stage lights shifted from orange to teal, “Cirque Du Soleil” began. It was a mellow tune with a moderate tempo that had the now-thinning crowd bouncing. Rudd and Hagen faced each other as Rudd soloed, then switched to just vocals on the second verse. When the tune finished, he introduced a new song called “Flint,” which was much heavier than the rest of the set, with fast lyrics and heavy drums.

Rudd recounted a dream he had where The Zooeys performed through a sprinkler-induced flood, then said the song they were playing in the dream was “Jumpin’ Jack Flash” by The Rolling Stones. The band took the cue to begin their cover of the classic tune, solidifying Rudd’s love of classic rock.

When the cover ended, the group launched into “Well Run Dry,” an original with a heavy guitar entry and fast, lyrical melodies. Taking a slower, more mellow turn, the group began “To Be Alone,” an almost-sad song that stayed low energy until a build-up and drop in the chorus that got audience members back into it.

“Nation of Prodigals” was next on The Zooeys’ setlist, a higher energy song with more rock-inspired drums. During an instrumental break, Rudd took a crowd member’s phone and shot a video of the sparse audience as they bobbed. With the crowd almost fully disbursed back to the bar area, Hagen took up the keys as well as his guitar for “NCR.” He took the song as a chance to show off his melody work while Rudd took a drink.

When the song finished, Rudd said the next couple songs were all about the band’s range.

“In another life we would have been a punk band,” he said. “We are not a punk band, but if we were, this is what we might sound like.”

“Araby” was their demonstration of punk. It was fast paced with some blast beats from Yeager and strong back-up vocals. Some audience members rushed from the bar to the dance floor to begin a mini-mosh pit upon Rudd’s request. After their demonstration of punk, The Zooeys took their range the other way, as Douglas picked up an acoustic guitar and Hagen placed himself on the keyboard. “Replicas” featured mellow fingerstyle guitar and a lack of drums that got the crowd swaying with their drinks through the soft tune.

In a quiet voice, keeping the energy of “Replicas,” Rudd said, “If there are any couples here that are gonna break up tonight, this one’s for you,” and began “You Look Tired.” The song was slow and heavy as Hagen got into a crouch for his solo that brought the audience energy up from the softer tunes beforehand. Closing out their hour-long set, The Zooeys played “Bonnie & Clyde,” a drum-heavy, high energy song with a countering sad tone in the lyrics. As the song progressed, the crowd got more excited, coming to a peak when Hagen crouched on his knees for a final solo.

The band members ran off stage to stow their instruments, then back on for a bow after the crowd chanted the band’s name. When the lights came up on the stage, Yeager, Douglas and Hagen handed out fistbumps, drumsticks, guitar picks and signed setlists.

Earlier in the night, A Band Called Hemingway kicked off the show promptly at 8 p.m. Drummer Dang Turcios, bassist Jacob Duhey, pianist Michael Wieduwilt and guitarists and vocalists Hailey Canfield and Grant Riesen began with “Views from a Hotel Room,” one of the band’s older songs and a fast, bass-loaded way to get the crowd’s attention. About two dozen audience members sat around the stage and bar areas.

As the stage lights turned red, the band began its song “First & Make Believe.” The track’s heavy, emo tone matched both the lighting and the crowd’s enthusiasm as a few people joined the dancefloor to bob their heads along with the beat. Canfield took the crowd’s energy and ran with it, swinging her guitar through the air as Riesen sang, “Tonight, we’ll fight for something,” in the bridge.

When the song ended, Riesen took the mic and began to introduce the band members and their history, explaining how they met and began playing together while attending Doane University in 2016. He said the show was the group’s first performance in three years, and he felt like it was their first because the group had changed so much since its last show.

“Thanks for being a part of this … being the inaugural audience,” he said to the sparse crowd.

Riesen explained the first three songs of the show were older ones, but the next few would be from their most recent EP “Placate,” released in June 2018.  Strong guitar riffs led the band into “Chicago,” and flashing purple lights matched the song’s pop punk tempo. When the fast tune concluded, Riesen set his guitar down to focus on his vocals as “I Would’ve Stolen You a Whole Orchestra,” began. When the slower rock ballad was finished, Riesen explained the next song, “Placate,” was written for his older sisters when they left for college.

“The song means different things for different people,” Riesen said. “Maybe not. You can all think about my sisters while I play it, if you want.”

The song’s heavy four-on-the-floor beat contrasted the rather gentle lyrics about missing someone: “I fell asleep while watching leaves coming down all around mom and dad’s front porch.”

As another dozen audience members gathered around the bar, the group began an unreleased song called “Truth Is” that Riesen said they plan to drop in June. After some joking around — one audience member yelling “I love Jacob,” and Duhey responding “I don’t really like myself,” — the group concluded its 40-minute set with “January,” a tune Riesen said long-time fans would remember.

After a 20-minute break, The Credentials came on stage, drawing another dozen people to the dance floor with just their presence. Drummer Seth Beem, bassist Ronaldo Carcamo, guitarist Taylor Teichroew and guitarist and singer Everest Sturdevant thanked the crowd for coming and jumped right into “Your Dream,” a heavy, deep headbanger that excited the ever-growing audience. The band left the crowd no time to breathe as they dove straight into “Feel That Now,” another song meant for headbanging.

Sturdevant took a moment of rest and engaged the crowd, making an “Are you feeling it now, Mr. Krabs,” joke about the last song’s name. He then introduced their next song, an older track called “Ultimatum.” Beem’s quick hands on the drums and Sturdevant’s solos quickly got the audience dancing, now a couple dozen people headbanging and showing off their devil horns.

When the pure rock song died off, Sturdevant introduced the next song “Dud,” joking, “It’s about an errant firework.”

The track was fast and heavy, and the frontman made sure to use all the stage space he was given, propping a foot up on a speaker by the crowd as he performed a high-pitched solo. When the now orange and blue lights calmed with the music, Sturdevant took the opportunity to thank the audience for their energy.

“This feels good, man, you guys are cool,” he said. “It’s been a long work week. My boss is in here somewhere. Thanks Paul.”

A bald man, assumedly Paul, raised his beer in acknowledgement as the band began to play “Smokey Blaze.” The softer but still fast song started with a low guitar solo and escalated until it came to a sudden stop and the group began “D.L.Y.W.” Another soft song, yellow spotlights shined across the swaying crowd, who were still picking up on the band’s energy.

As Sturdevant explained, the next song, “Your Ways,” was written by Beem about loving someone who “switched up on you.” Beem and Teichroew switched places, Beem picking up a teal guitar to take the lead. The song was much slower than the others and had almost a folk punk feel to it.

Beem and Teichroew didn’t switch places again, preferring to stay on their new instruments for the rest of the set. “Your Last Song” was more indie rock than punk or anything the group had played earlier in the show. The group planned to close their show with it, but realizing they had time for another tune, launched into “The Fall.” A slower but just as headbanging song with high pitched solos, The Credentials ended their 35-minute set with Beem, Sturdevant and Carcamo huddled and bobbing their heads together when the song came to a close.

When the whole show was over with, Rudd from The Zooeys said that after over a year without performing, he was grateful for the night.

“It was good to see how many people turned out,” he said. “It was a great environment, a lot of energy and a good, strong crowd.”