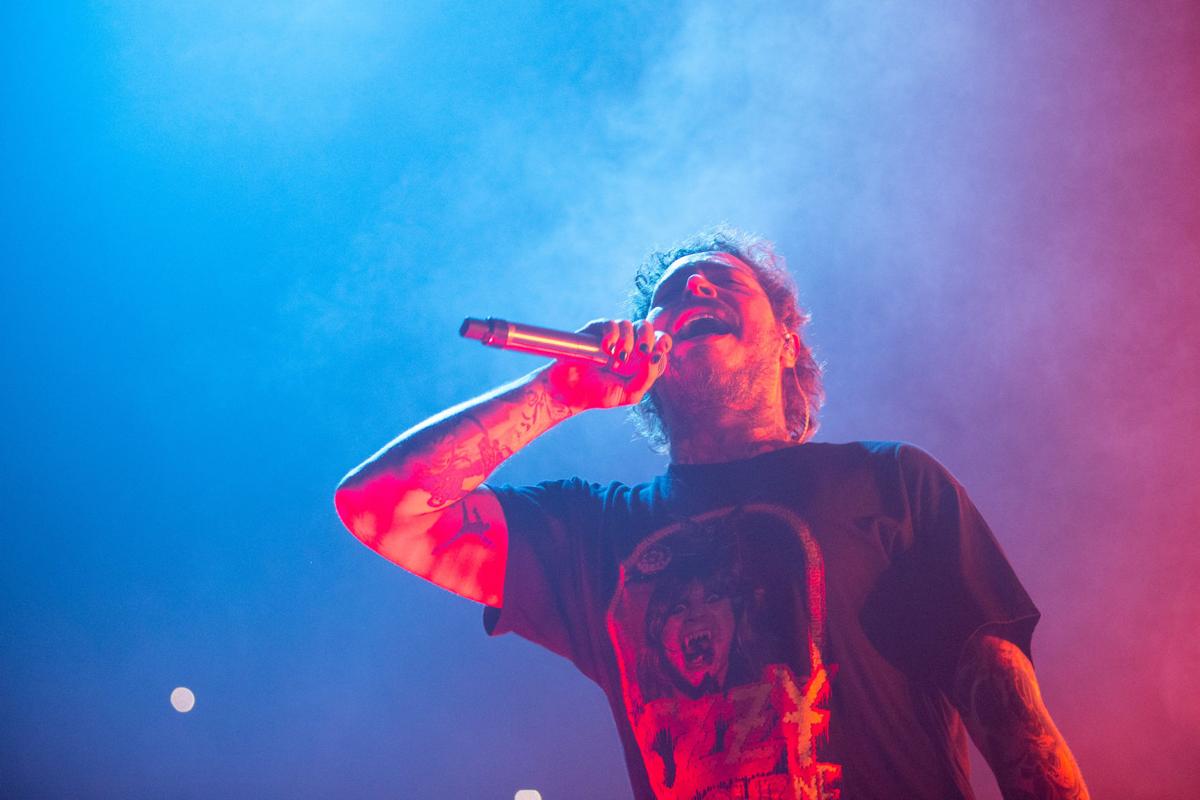 Post Malone performs on stage during his Runaway Tour at the CHI Health Center Omaha on Tuesday, Feb. 4, 2020, in Omaha, Nebraska. 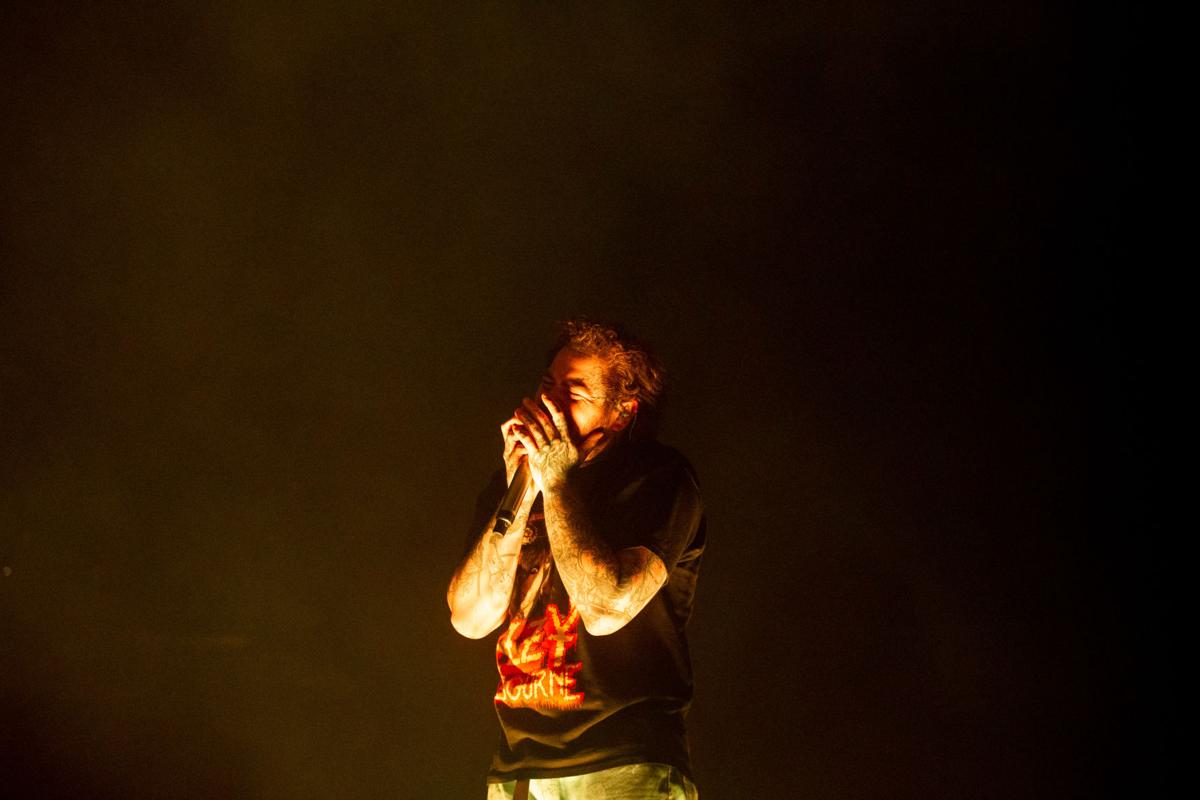 Post Malone closes his eyes while he performs during his Runaway Tour at the CHI Health Center Omaha on Tuesday, Feb. 4, 2020, in Omaha, Nebraska. 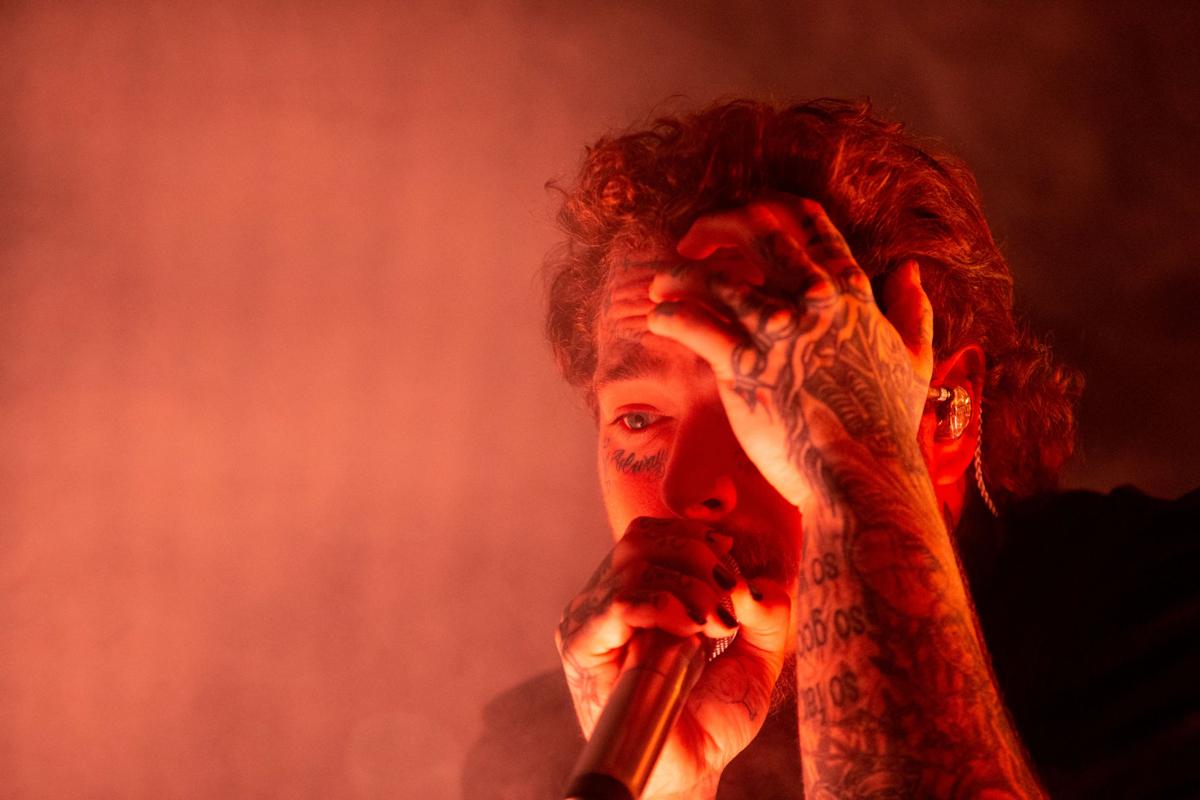 Post Malone reaches for his face while he performs during his Runaway Tour at the CHI Health Center Omaha on Tuesday, Feb. 4, 2020, in Omaha, Nebraska. 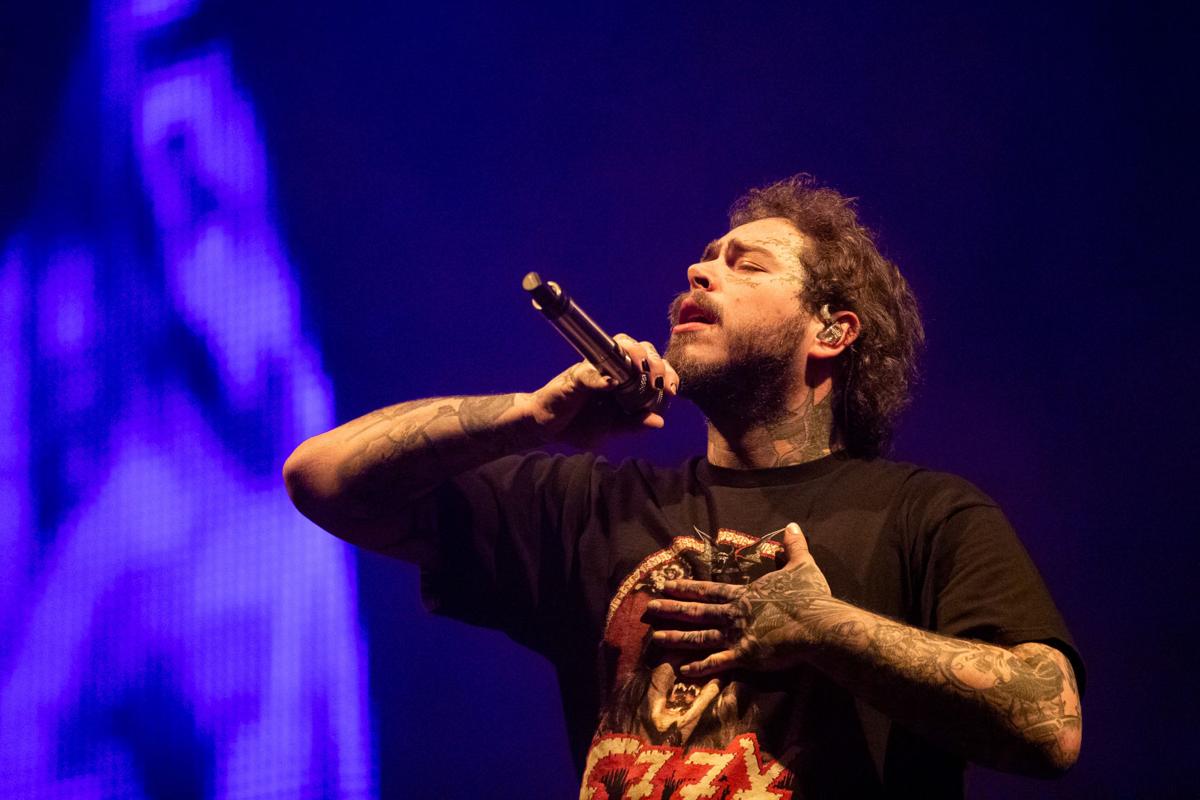 Post Malone puts his hand on his chest and closes his eyes during his performance on his Runaway Tour at the CHI Health Center Omaha on Tuesday, Feb. 4, 2020, in Omaha, Nebraska.

Post Malone performs on stage during his Runaway Tour at the CHI Health Center Omaha on Tuesday, Feb. 4, 2020, in Omaha, Nebraska.

Post Malone closes his eyes while he performs during his Runaway Tour at the CHI Health Center Omaha on Tuesday, Feb. 4, 2020, in Omaha, Nebraska.

Post Malone reaches for his face while he performs during his Runaway Tour at the CHI Health Center Omaha on Tuesday, Feb. 4, 2020, in Omaha, Nebraska.

Post Malone puts his hand on his chest and closes his eyes during his performance on his Runaway Tour at the CHI Health Center Omaha on Tuesday, Feb. 4, 2020, in Omaha, Nebraska.

On Tuesday, Post Malone came to Omaha to kick off the second leg of his Runaway Tour and hundreds of fans braved the Nebraska winter to see him perform at the CHI Health Center. Malone was not alone and brought melody wizard and one half of the rap group Rae Sremmurd, Swae Lee, along for the tour. Preceding Swae Lee were DJ E Nice and rapper Tyla Yaweh.

By the end of the show, one thing was certain. Post Malone is a rockstar.

It wasn’t always that way though. Not long ago, Austin Post was a SoundCloud rapper with a viral single, “White Iverson,” who was thought to be just another one hit wonder. But somehow, Post tapped into something truly special.

Since 2015, he’s released a collection of mega-popular songs, and albums climbing into Spotify’s Top 3 most streamed artists of the decade. To see his transformation has been quite the journey, and Malone has remained in the forefront of modern hip-hop, with a genre-bending blend of rock, country and contemporary rap to create one of music’s most unique voices.

By the time the show had begun, the venue had filled wall-to-wall with guests. The stage extended in a long catwalk, with pits for the audience on both sides. Two giant 20-foot screens rose skyward behind the stage.

Swae Lee set the tone of the show perfectly as the opening act, bouncing between hyperactive rap anthems like “Black Beatles” and “Powerglide,” and high pitched autotuned dance hall anthems like “Unforgettable” and “Guatemala.” Lee previewed his own new music  of his own as well. And at the conclusion of his set, he put a phone number on the screens and asked fans to text his fan hotline to talk about the show.

By the time the lights dimmed for the show, the atmosphere was electric with anticipation. After an extended rock music intro, a lone figure’s silhouette appeared, and from the fog emerged Post Malone, in true rockstar fashion.

Dressed in baggy, light wash jeans, an Ozzy Osbourne t-shirt and white slip-on Vans, the tattoo-covered, chain-smoking, Bud-Lite-drinking singer gripped the mic stand and belted the lyrics to the title track off of his last album “Hollywood’s Bleeding.”

From there, Malone bounced up and down the catwalk to a collection of his most popular songs. It was a Post Malone fan’s ultimate playlist, each song implementing impressive colored lights and striking visuals on the giant screens. These images ranged from camera footage of Malone performing to garish images related to the lyrics, but all of the effects were meticulously chosen to help set the dark and twisted atmosphere often captured in Malone’s music.

Each song had a light show that accompanied it, each one feeling like it was tailor made for the song. From the blue and green candy-colored strobes on “Candy Paint” to the ominous red strobes and spotlights on “Paranoid,”the concert wasn’t just a performance of Malone’s biggest songs, it was an expansion of them.

Malone’s rockstar showmanship didn’t stop at the lights. Pillars of fire and explosive fireworks erupted from the stage on “Over Now” and “Take What You Want.” The latter, which features rock icon Ozzy Osbourne, used the giant screens to project a video of The Prince of Darkness himself and create the sense he was singing along with Malone.

Near the end of Malone’s set, he brought out his acoustic guitar and performed “Stay” under a single spotlight, captivating the entire room with his powerful and commanding croons over simple, acoustic strums. Just when the show seemed to be nearing its end, Malone came back with “Rockstar,” which climaxed with a dramatic firework and pyrotechnics display, and just like every great rockstar, Malone smashed his guitar on the stage before ending his set with his multi-platinum hit “Congratulations.”

Despite being over-the-top at times, Malone brought a charm and innocence to the performance — like a nervous kid at a talent show. Malone often lamented about being nervous to perform in front of hundreds of fans, and begged that nobody be too hard on him if he messed up. After every song, he thanked the crowd for coming. It was all a humbling experience and one that showed a softer, more gentle side to Malone, before plunging back into the head-banging rock-rap fusion.

Malone’s most well received song was “I Fall Apart,” which bathed the entire venue in a yellow glow as Malone groaned and cried the lyrics to the haunting break up anthem.The crowd didn’t hesitate to do the same, with nearly the entire room cheering and singing along, some fans even letting tears fall with Malone.

Malone enlisted the help of Swae Lee on his 2019 smash hit “Sunflower.” The two embraced at the start of the song before singing together with their arms laced around each other's shoulders. This shared song was easily my favorite moment of the show, as the two had such an incredibly genuine chemistry on stage. It made me wish songs like “Spoil My Night,” which features the two singers, had made the set list.

By the end of the nearly three-hour experience, Malone had exhausted his vocals. Before ending the show, he closed with a final course thank you. Telling the people in the show that being able to play for his fans guys saves his life. It was a sweet reminder that regardless of Malone’s massive, almost unfathomable success, he still acknowledges the people who have put him where he is. In a final spectacle of lights and fireworks, Malone disappeared the same way he entered — in a cloud of smoke and darkness.

If Tuesday’s show was any indication of how the rest of the second leg of Post Malone’s Runaway Tour is going to go, then Post Malone fans have every reason to be very excited. Malone has a stage presence that is part Freddy Mercury, part Alice Cooper and 100% rockstar.

This article was modified at 8:02 p.m. on Feb. 5 to include show openers DJ E Nice and Tyla Yaweh.