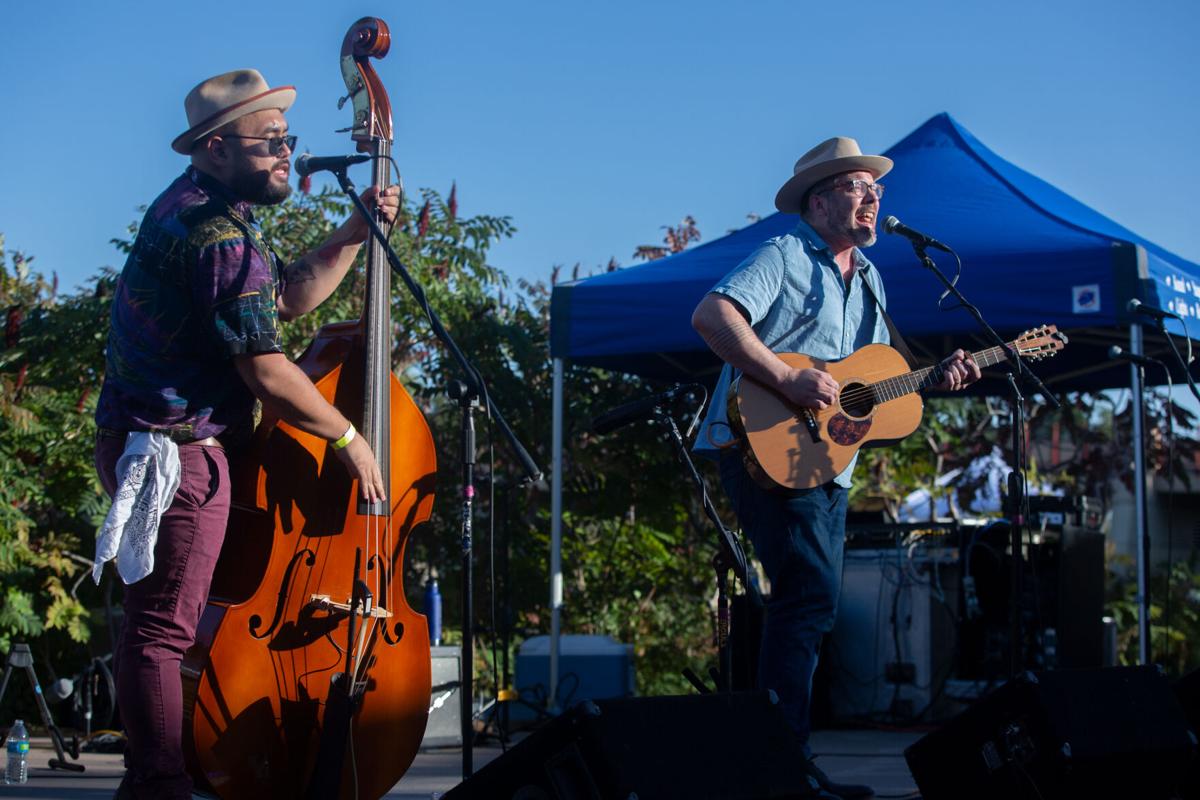 Jack Hotel performs during the first night of Lincoln Calling at the Union Plaza on Thursday, Sept. 23, 2021, in Lincoln, Nebraska. 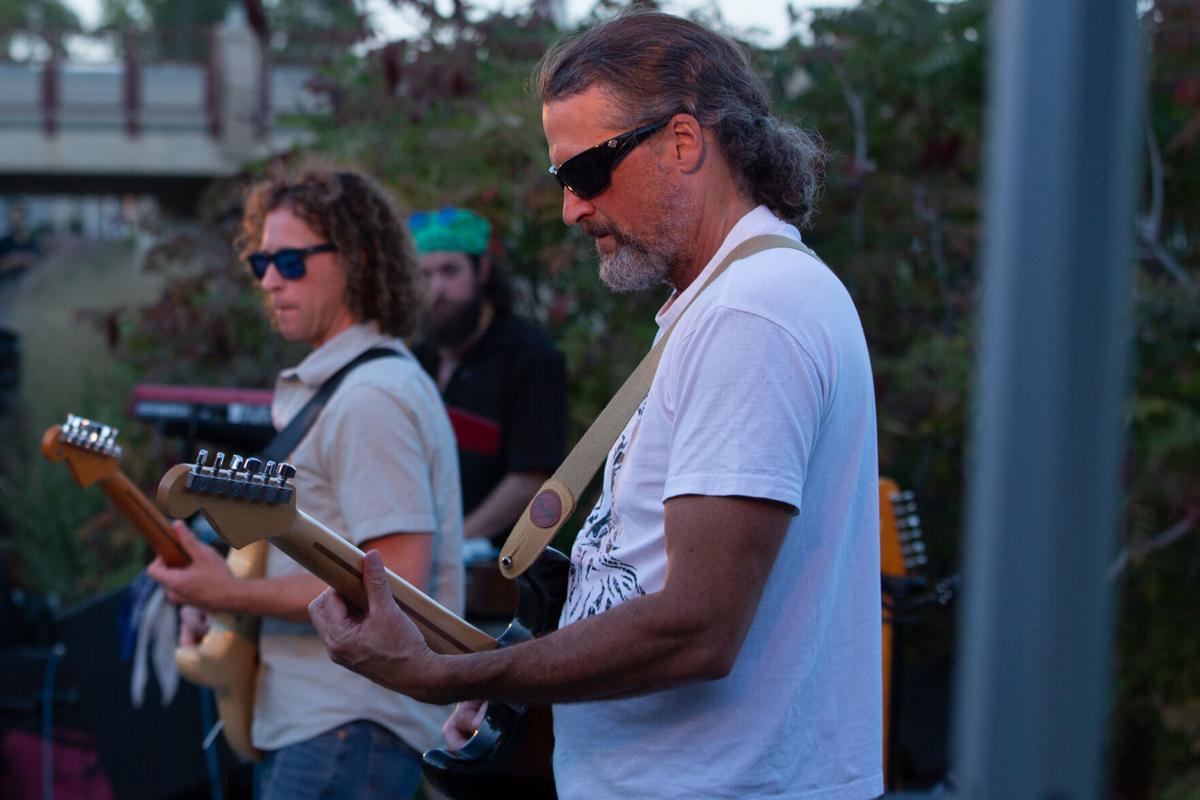 23rd Vibration performs at the first night of Lincoln Calling at the Union Plaza on Thursday, Sept. 23, 2021, in Lincoln, Nebraska. 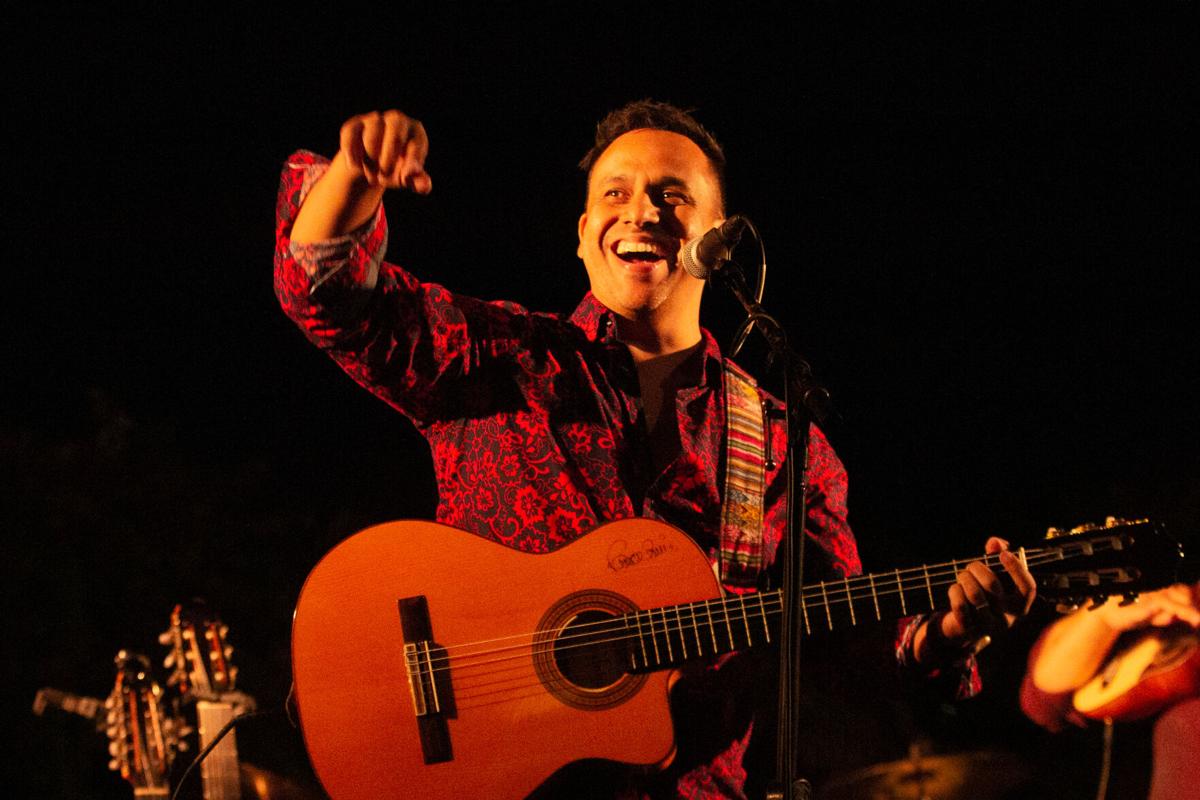 Jarana’s Daniel Martinez looks out to the crowd during the first night of Lincoln Calling at the Union Plaza on Thursday, Sept. 23, 2021, in Lincoln, Nebraska. 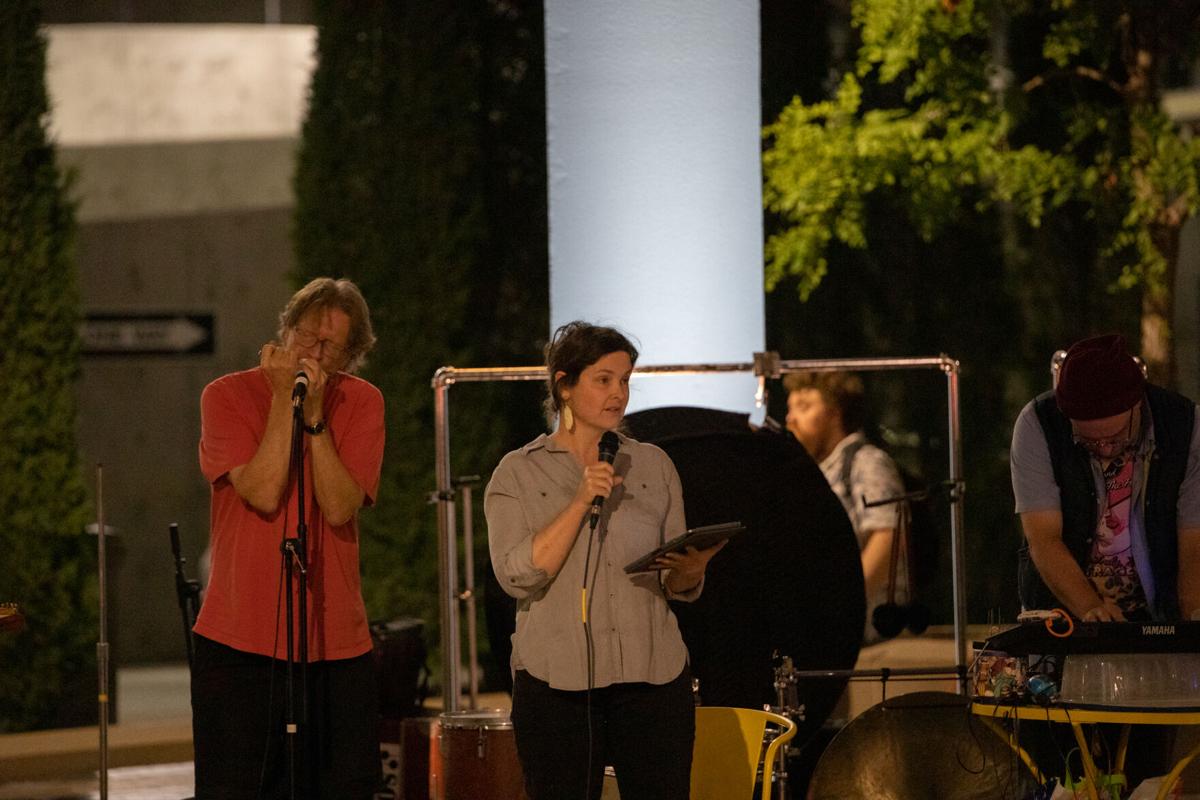 The Mighty Vitamins perform at Tower Square during the first night of Lincoln Calling on Thursday, Sept. 23, 2021, in Lincoln, Nebraska. 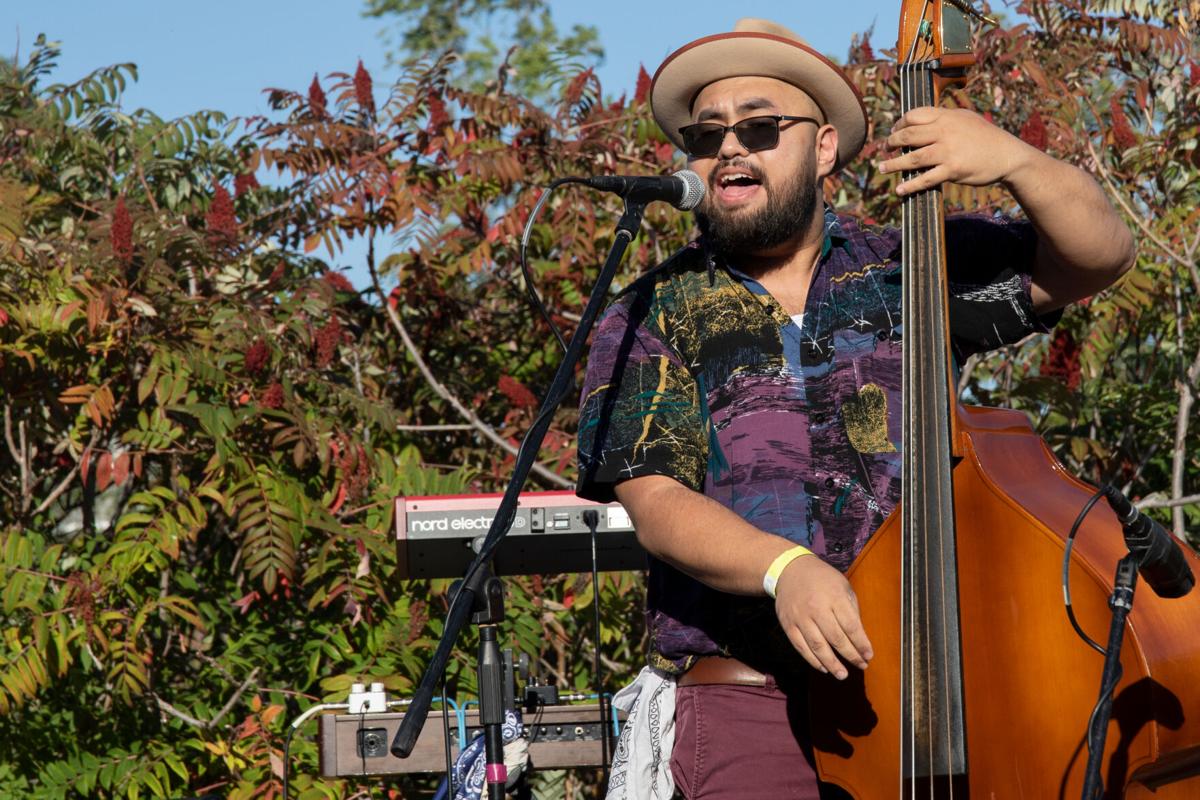 Jack Hotel performs during the first night of Lincoln Calling at Union Plaza on Thursday, Sept. 23, 2021, in Lincoln, Nebraska.

A collaboration between Hub and Soul and Lincoln Calling kicked off the three-day weekend of live performances in Lincoln. Attendants were greeted by the welcoming smell of tacos, burgers and other hot foods as they walked in — desirable purchases for a near 4-hour event that began after 5 p.m.. Three bands — Jack Hotel, 23rd Vibration and Jarana — took the stage for Hub and Soul, in that order.

Jack Hotel, a local band, performed against a clear sky and an audience not sure what to expect on the first day of the in-person-again Lincoln Calling. The self-proclaimed folk/Americana trio ended up minus one on the drums for the night due to an unfortunate temporarily-debilitating accident. A lack of percussion, however, did not stop Jack Hotel from keeping tempo. With only two men and their strings, they played a set as long as any other from the night and never gave up.

The band oozed bluesy ambiance as they performed a well prepared set. Lead singer Günter Voelker wore a short-sleeve denim shirt and accessorized with a white cowboy hat, and cellist Kim Taruc held a sweat towel in his back pocket.

Jack Hotel took their time during the set, and paused throughout to converse with the audience before slipping into another soulful vocal strain. Jack Hotel’s storytelling style made its mark on the night and proved a great opener for the following bands.

Jack Hotel played both lighthearted and contemplative tunes against a wall of foliage in a scenery perfect for the low-key sounds of folk/Americana. Audiences were seated on boulders and dirt, or chairs of their own if they came prepared. A dog in the front row groomed themself. The whole setting seemed as if a family cookout was occurring with an overqualified, overprepared band playing to the casual, but thoughtful vibe.

To add to the comfortable atmosphere, an unnamed guest musician took the stage during Jack Hotel’s performance. The guest played a harmonica, a perfect fit for the band’s laid-back genre. The integration of the guest illustrated Jack Hotel’s decade-long experience in the subtle, yet paramount, art form of folk music.

The sunset cast a pink glow on the stage area of the Union Plaza as the second set of the day came to the stage. 23rd Vibration, another local band, supplied a “roots, reggae performance and original stylings” — from the band’s website — that perfectly encapsulated the rustic quality of sundown in the midwest.

23rd Vibration, led by Supe on drums and percussion and Brad Hayes on bass, guitar and harmonica, delivered a groovy, mellow performance that got people’s feet going whether they were near the stage or at the back of the crowd. The setlist was a combination of familiar and unfamiliar, but there was a definite modern twist — not just in the music, either.

Kua, on saxophone and cowbell, stood out in a pair of sleek white Nikes and joggers. His expletives, beginning with a burp directly into the microphone, added a dash of color to the already-bouncy show. At the back, Magok Gaany was a consummate professional on a skinny black bass guitar, his red button up shirt patterned with tiny black marijuana leaves.

The group’s performance was elevated by the presence of Alex Lucier — who wore a green bandana and sunglasses perched atop his head as he played not one, but two pianos in the back. Although his role didn’t allow him to move, he stepped up in place of a missing drummer — a recurring theme for the night — and carried the melody. Although he was in the back, Lucier was interacting with audience members who crept close to his side of the stage while maintaining the beat.

Like the pockets of flavor that rock salt on a chocolate chip cookie provides, 23rd Vibration’s mellow reggae tunes were energetic at times but not over-the-top. During their set, the bandleader said their music was meant to spread harmony — a message corroborated by the unbroken harmony of the set.

Despite the electric instrumentation, the down-to-earth nature of reggae was underscored by the moving performance of the entire lineup of 23rd Vibration.

Before Jarana was ready to go, bandleader Daniel Martinez’s pep teased the kind of show that the group would put on: “If you’re not convinced to dance, go back and get some alcohol.”

As the final act, Jarana had large shoes to fill, but their eclectic setlist — combining the sounds of the Andes Mountains, Flamenco riffs and a rock beat according to their Facebook — left the audience wanting more. Funky guitar, a solo from each band member and heavy subwoofers let the entire two blocks of Union Plaza know that this was the performance to be at.

Jarana dressed to impress in button-up shirts complementing their Andean flair. Some unique instruments — including the multi neck-guitar, bongos and congas — made appearances throughout the set.

Jarana started with a solo acoustic guitar performance from Martinez, but as his strumming picked up, the maracas were cued in; the kick drum, ukulele, electric bass and crash of the cymbal indicated a performance that would not let up for the whole final hour.

Observing Jarana was like a vacation to Miami with an audience from the Florida Keys. There was power in every instrument, regardless of whether it was a solo moment or not, and it was impossible to distinguish who was leading at any point in the list. Of all the night’s bands, Jarana took the least breaks — Martinez only initiated them to goad the audience by asking if they wanted one more song.

Between shouts of “¡Epa!” and Martinez pulling an audience member on stage for a short but sexy number, as well as a remix of Michael Jackson’s “Beat It” and a long, long, “Bamboleo,” Jarana brought Lincoln Calling back to life.

On a cool September evening, with the scent of onion rings and an autumn bonfire hanging in the air, The Mighty Vitamins performed an eccentric set of original spoken word poetry that was both thought provoking and genuine.

A part of the Jay Kreimer Experimental Showcase, The Mighty Vitamins was a group composed of three hipster grandpas, a reserved guitarist clad in a blue t-shirt and a professional young woman with a sweetly composed demeanor as their lead. This was not the traditional concert, but rather a performance of poems with music to enhance each story. The group presented five pieces with topics ranging from suicide and death to “The Little Mermaid.”

The lead speaker’s breath control was steady and persistent. She was able to emphasize the words she needed to emphasize, and she never ran out of breath in any of the five songs.

Each musical poem transcended the audience into the world created by the minds of these charismatic performers. This world that The Mighty Vitamins temporarily took listeners, included a river that connected several characters and stories, as well as a house fire that took the life of an impactful college professor. At particular moments, the words were lost and the music took over, conveying raw human emotion to the listener in a way that words couldn’t.

The group used a variety of instruments, including a trumpet, harmonica and other instruments that were unfamiliar and almost peculiar but in the best way possible. The sounds they created were mellow and effectively paired with the words. When there was a river described, you could hear the river in the music. When a forest was the setting in a poem, you could hear birds cawing from the instruments. The Mighty Vitamins managed to take the audience away from the streets of Lincoln for a moment, into a world of nature, good vibrations and the symbolic interconnectedness that winds through all of us, much like the river featured in their set.