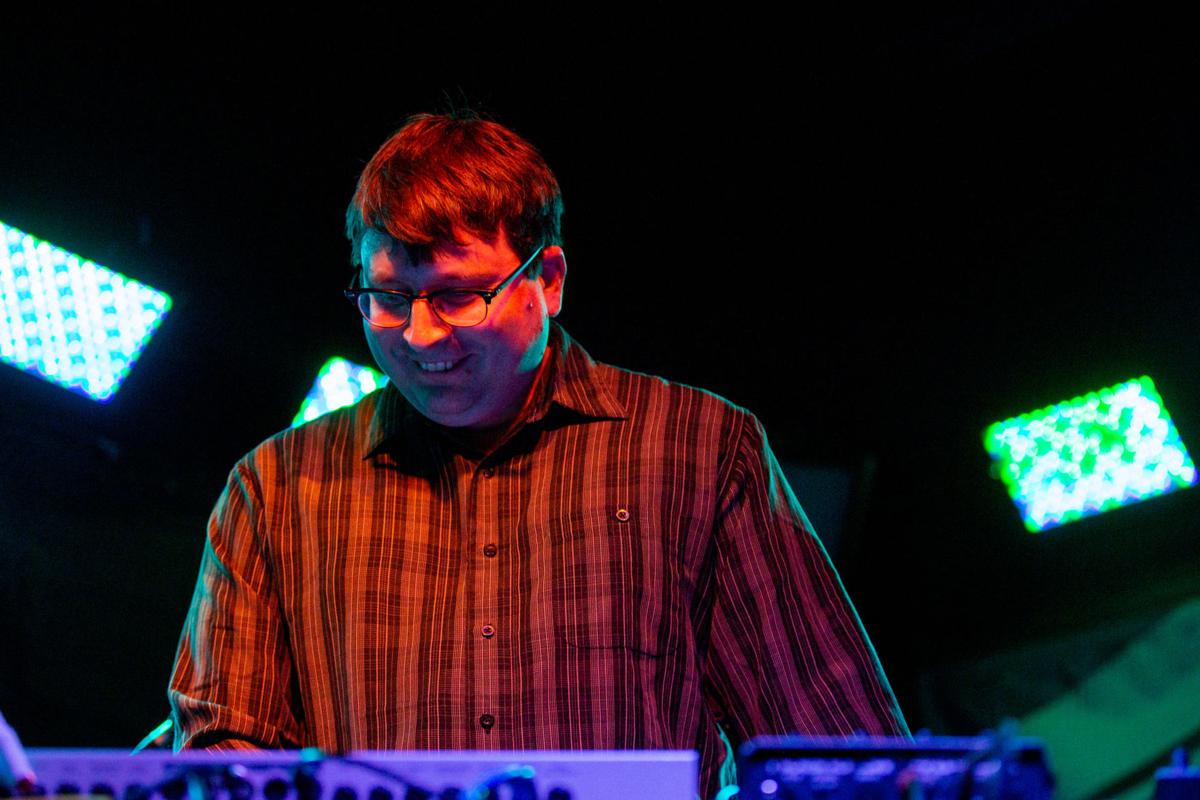 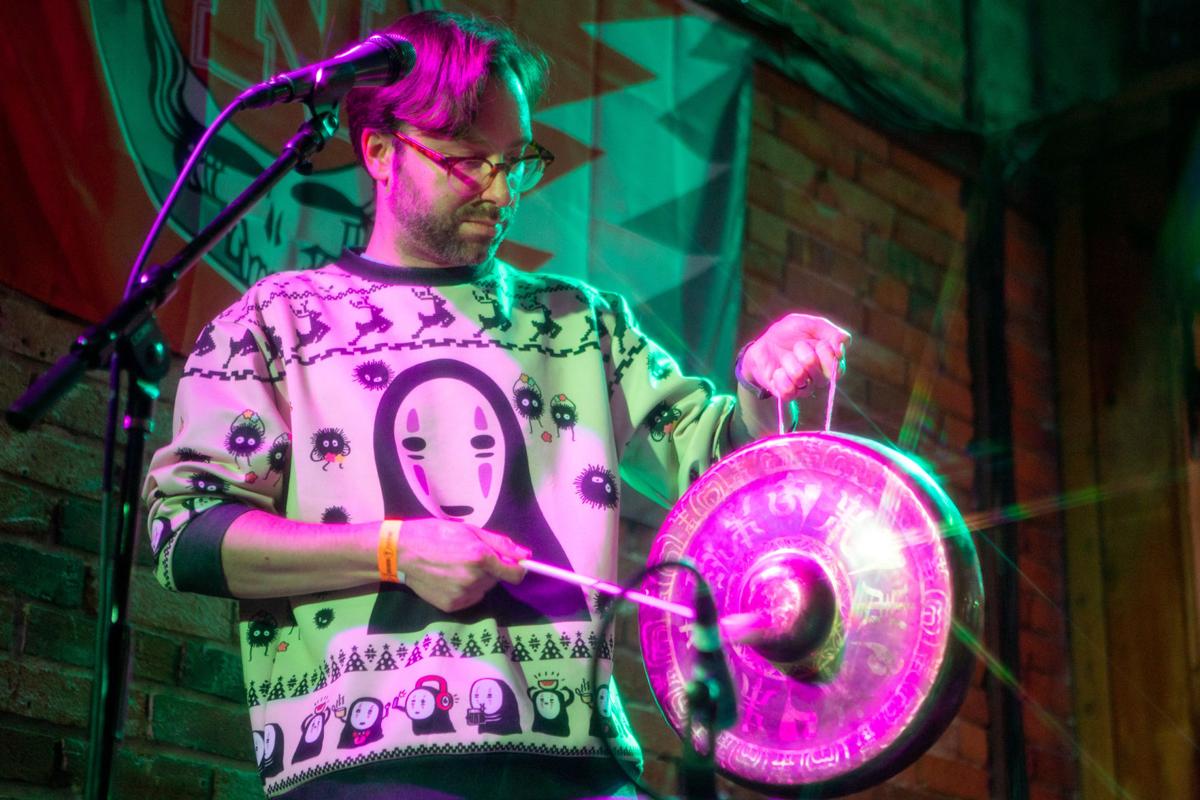 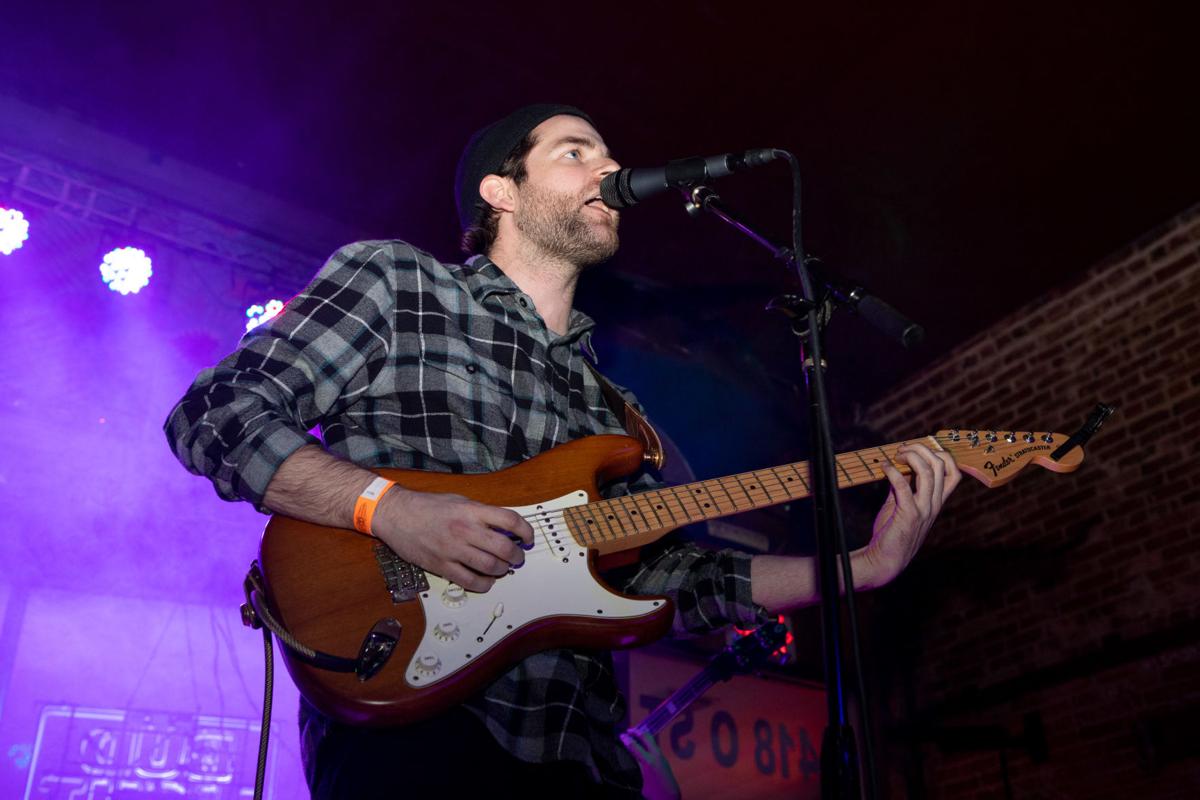 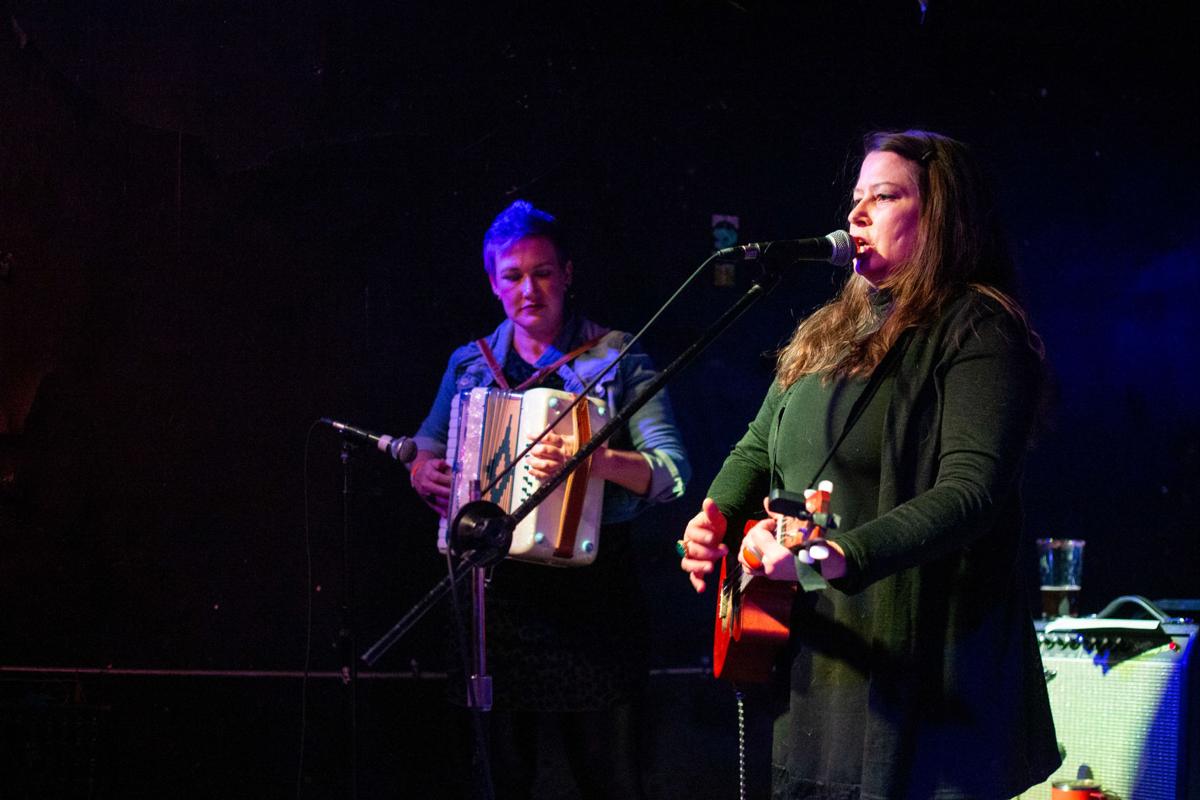 Sisters Meghan and Kristen Bailey perform on stage with the rest of The Inbetweens at the Zoo Bar during Lincoln Exposed on Thursday, Feb. 13, 2020, in Lincoln, Nebraska. 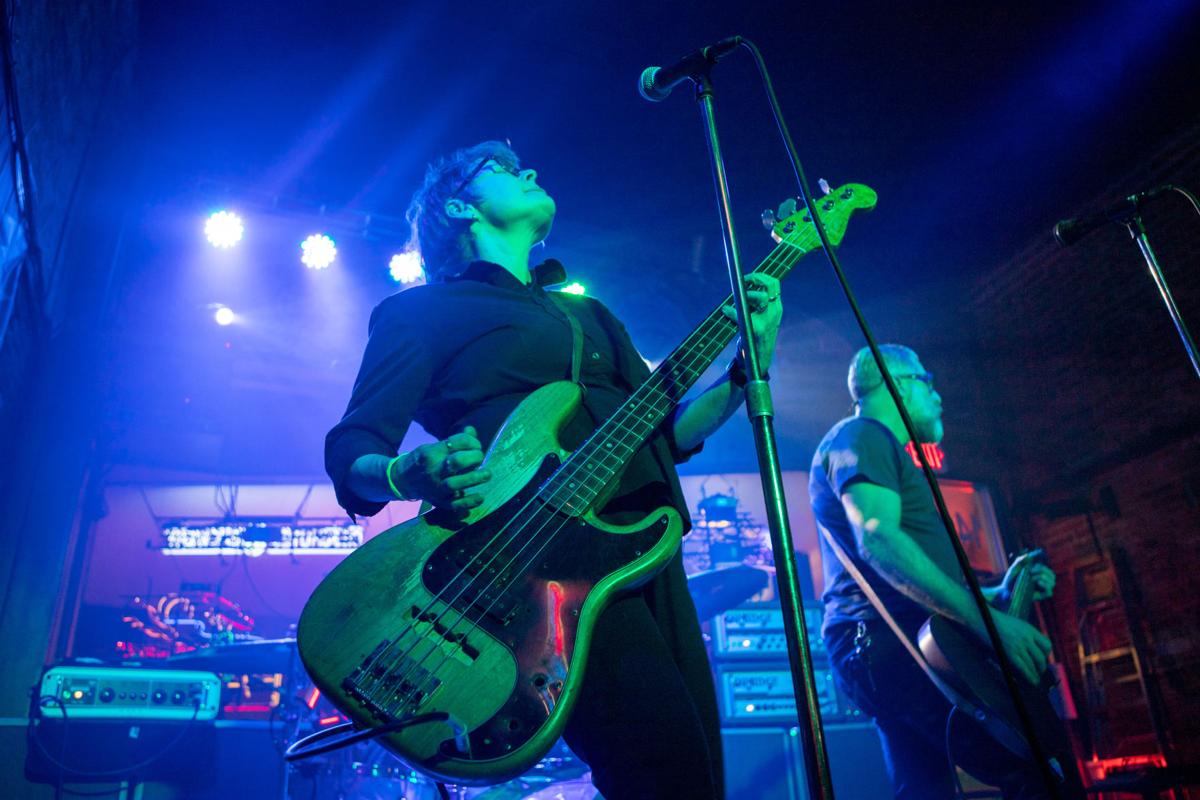 With a name like Sputnik Kaputnik on the bill, the energy was running high leading up to the duo’s Lincoln Exposed performance at the 1867 Bar on Thursday night, and they didn’t disappoint.

Through a solid mixture of dry humor, hypnotic synths and zany sound effects, Sputnik Kaputnik’s set was certainly one worth remembering. Their opening song set the musical precedent for the next forty minutes, as the two jammed out on their synthesizers, exuding a light-hearted, trippy sound that would fit well on a Kraftwerk record. There was a bumping electronic beat to the song that was impossible not to tap your foot along to. Meanwhile, the breezy synths helped build an underlying aura that helped round out the Kaputnik's sound. It was apparent the two were genuinely having a blast performing, as they were smiling and laughing throughout the set, which encouraged the audience to relax and have fun on the technological ride.

Throughout the rest of the set, the band kept up this engaging experience by playing more into the humor of their songs. One of the wittier tracks was entirely about the desire for good internet connection. With a quirky, upbeat vibe, the two sang about how a solid internet connection is a necessity in order to download pornography and play Minecraft.

Halfway through its set, the band launched into a retro-sounding ditty that felt ripped from an 8-bit video game. The singer stated he was inspired to write the song after he listened to 10 minutes of car alarms, which was apparent because most of the lyrics consisted of him asking where his car had gone.

Sputnik Kaputnik’s set at the 1867 Bar undoubtedly made for an entertaining and jovial experience that started the night off strong. The fun-loving personality they brought to their music made the performance one that was both incredibly groovy and absorbing at the same time.

It’s that point in the movie — the climax came and went, and now all the main characters are gathered around a table in a bar, wistfully cracking jokes and reflecting on the events of the movie, whatever they were. The camera slowly pans across the familiar faces and finally settles on one empty seat at the end of the table, recalling whichever character it was who tragically didn’t make it through the plot of the film.

Now imagine the song that was playing. It sounds like Steady Wells.

The four piece indie-dreamboat of a band filled Bodega’s Alley with a twinkly, highly emotive brand of pop rock that turned the entire venue into a nostalgic montage, one that hopefully featured no casualties.

The performance began with a pair of songs performed solely by the band’s singer, Jordan Smith. Adorned in flannel and a beanie and armed with a matte Stratocaster, Smith cast a magical aural aura throughout the building. His saccharine voice was complemented with a plethora of hammer-on melodies and dynamic swells which rocked Bodega’s boat throughout the first couple songs of the voyage.

When the rest of the band set sail with Smith, the music crashed into a glorious groove complete with bouncing bass lines and soaring guitar leads. Each song exceeded at portraying the melancholy lyrics Smith embroidered into the instrumentation.

On the song “Battles,” Smith crooned, “You’re a battle I don’t want to lose.” The anguished chorus felt like a final grasp at the hand of a lover on their way out the door.

Toward the end of the set, the band fell into an unfathomably smooth groove of bass and drums. The song bounced along with enough playful exuberance that it’d fit perfectly behind a travel-adventure montage in the next “Ice Age” movie. Over the low-end rhythm confection, the two guitarists traded enough plucky riffs to make even Manny the mammoth crack a smile.

By the time Steady Wells completed its set, the band’s sentimental performance left nothing to do but grab some friends, crack open a beer and reminisce.

If Steady Wells played out the final scene of a tear-jerking film, Gamma Goat is what would be playing after switching to the public access station a channel over.

The droning, drum-slapping experimental duo played a perplexing concoction of hand percussion, vocal loops and other miscellaneous noisemakers. The motley of instruments created an atmosphere like that of Mars — sparse and otherworldly.

Before the first song of the set, “Swamp,” the band members took a brief moment to discuss a dead shark in a trailer, which, surprisingly, was not stranger than many of the band’s lyrics.

Usually beginning with a primal drum beat stripped to its absolute core, the band’s songs morphed and flowed from one enigmatic chant to another. Whether it was rhythmically incanting “gotta eat first” or repeatedly telling the audience that someone “got a robot body,” both members of Gamma Goat took turns exploring the power of mind-bending mantras.

The band never took themselves too seriously, and seemed to relish in the music being created. At each song’s conclusion, hand drummer and vocal loop controller Luke Norse would straighten from his hunched position over his djembe drum and beam a stretched, goofy grin at the audience.

The set —  which, for all I know, could’ve lasted anywhere from five minutes to three days — concluded with one of Gamma Goat’s most entrancing pieces. From the start, Norse planted a chant saying “strange creature, similar features” that grounded the orchestration while the band smacked drums, blew into a miniature didgeridoo and clanged singing bowls. The resulting soundscape was nothing short of transcendent.

Should the mix have been louder, I may have lost my place in the universe.

While the majority of Gamma Goat’s gear fit into a reusable shopping bag, Domestica had different plans for the stage. Wheeling out a drum kit and four separate amps for bass and guitar, the three-piece band brought a whole new meaning to the term power trio.

Veterans of Nebraska’s punk scene, the members of Domestica are still pounding out alternative rock tracks harder than half the bands around — slinging grunge with graying hair.

It did, and both her and guitarist Jon Taylor, strings slung low, bashed and shredded their instruments in a rip-roaring performance. Both instruments were bathed in the warmth of amp distortion. Very few, if any, other effects were utilized on stage — just guitars plugged into amps. Without a doubt, that’s all the band needs.

Taylor’s impressive riffage and explosive downstrokes were electrifying, and Ore’s chunky bass chords added so much beef to the band’s sound it was grill-worthy.

About halfway through the set, the band members declared the next few songs would be ballads. This would be true if ballads sound like a train barreling at full speed toward a bridge the conductor knows is out.

Without hardly catching their breath, the shredders dove head first into another wild punk tune. Propelled by the raucous double-kick drum beats of Pawl Tisdale, the group bashed and yelled with the fervor of rock legends. The tassel on Tisdale’s fez swung as he ruthlessly hit breakdowns at breakneck speeds.

Before allowing the energy to dissipate throughout the bar, the band concluded the same way they opened — rumbling, yelling, rocking and, of course, rolling.

Green and purple lights beamed on the five members of The Inbetweens as they crowded onto the Zoo Bar’s stage for the second night of Lincoln Exposed.

Fronted by family, vocalist Kristen Bailey plucked her ukulele as her sister Meghan Bailey pumped her accordion and their niece Mackenzie Sanford functioned as a multi-instrumentalist. Sanford explored versatility through strokes on an omnichord, a musical saw and a toy piano. Behind the family, Patrick Nichols sported a fiery bass.

Kristen started off the set with a simple “good evening” and chuckled as the drummer quickly tapped her sticks together, signifying the start to the genre-bending set.

Throughout the set, Kristen employed potent vocals over the steady strums of her rusty-red ukulele. During “Nothing Better,” the third song of the set, the light, steady tap of the hi-hat andNichols’ rhythmic bass slaps lent a jazzy atmosphere which filled the bar.

Kristen would interlace the flow of songs with an occasional, “Wait, do I start this one?” which would disperse laughter among the audience.

As the set went on, the band changed its pace to create heavier, more triumphant hymns that kept the crowd on its toes. Chilling vibrations flooded the room as Sanford lightly caressed her musical saw with a bow during “You Alone.” Meghan fluxed the air inside her accordion with fierce thrusts, which threw a southern twang into the mix.

Toward the end of the set, Kristen distorted her beachy strums, teasing the audience with a more driven, disturbed timbre.

The audience cheered as Kristen sipped from a bright red mug and introduced the final song of the night, “The Drink.” Her shaky, yet strong vocals roared carefully-chosen rhymes as Meghan head-banged and swayed with funky force. After an anticlimactic build up, Kristen shouted, “Oops!” before nailing her final chord, sending the crowd off with a laugh.

This article was corrected at 1:05 p.m. on Feb. 20 to correct the name of drummer Pawl Tisdale.