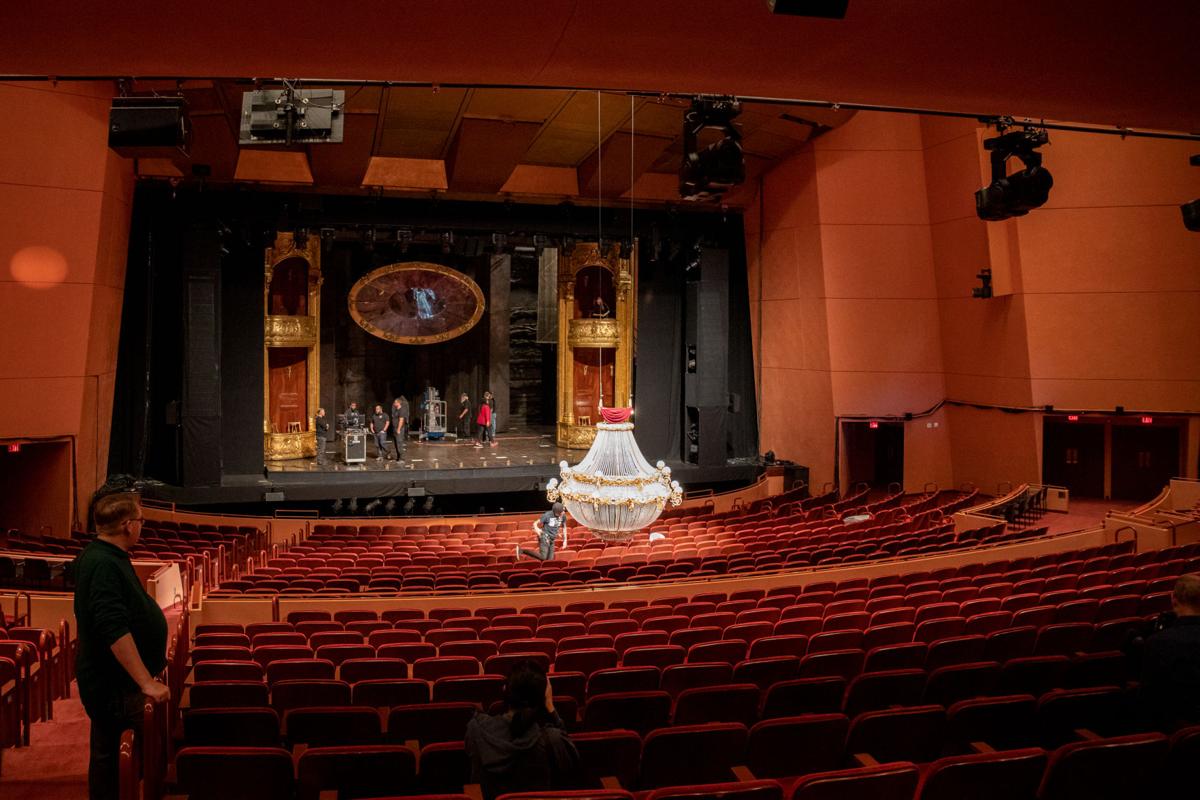 An inside look of the Phantom of the Opera production inside the Lied Center for Performing Arts on Thursday, Oct. 24, 2019, in Lincoln, Nebraska. 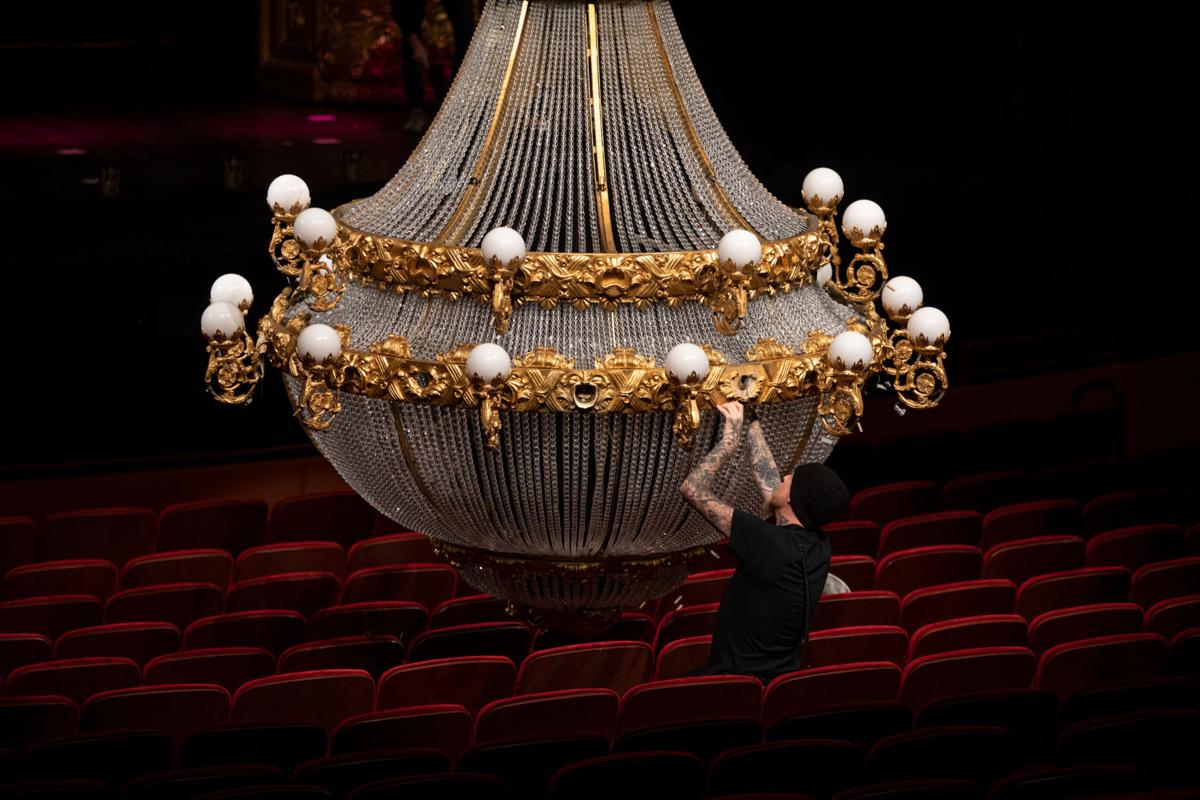 A crew member adjusts part of the chandelier for The Phantom of the Opera production at the Lied Center for Performing Arts on Thursday, Oct. 24, 2019, in Lincoln, Nebraska. 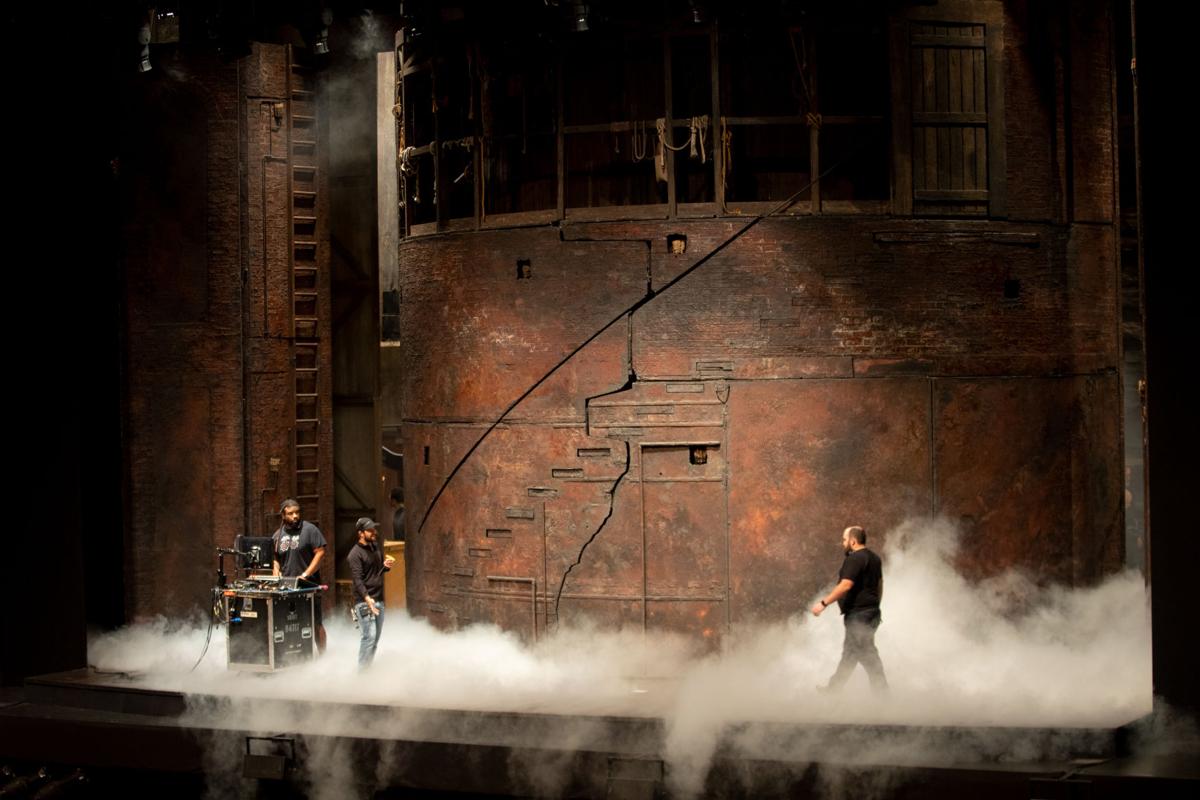 Crew members work to set up the stage for the matinee performance of The Phantom of the Opera on Thursday, Oct. 24, 2019, in Lincoln, Nebraska. 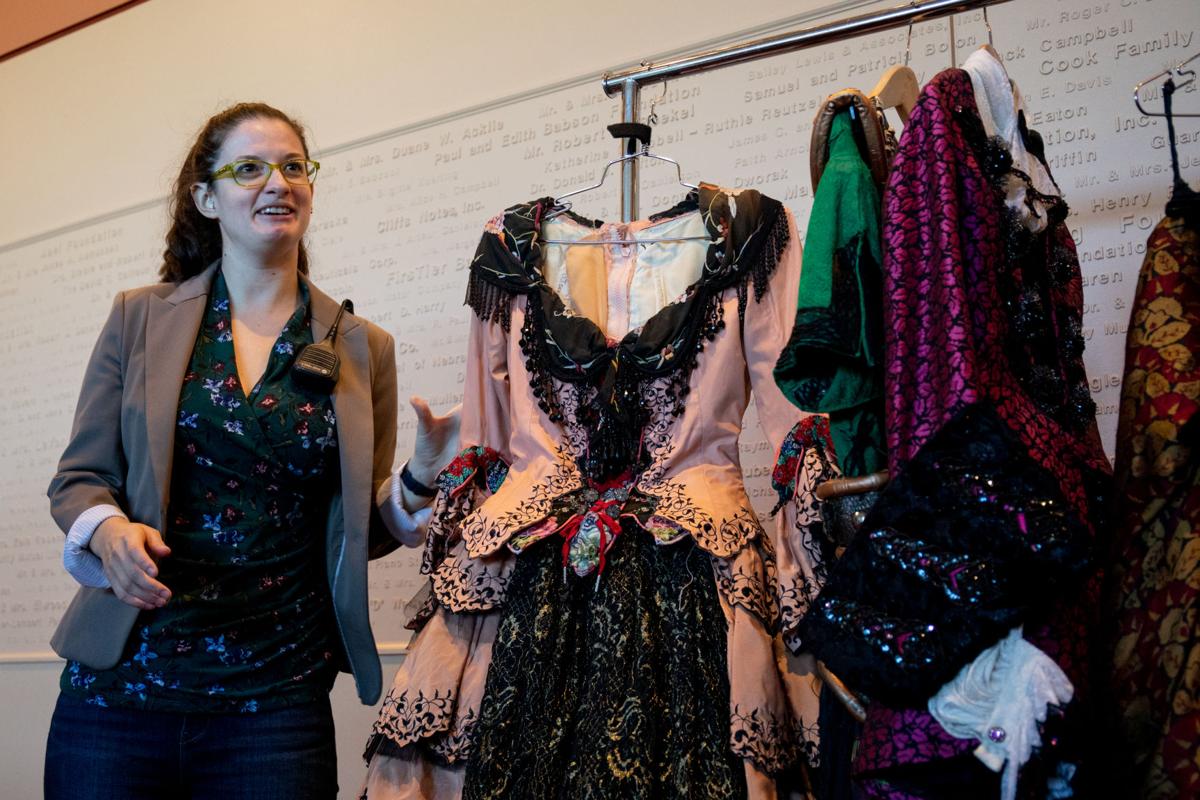 Assistant stage manager Lizz Bender displays several of the costumes for The Phantom of the Opera production at the Lied Center for Performing Arts on Thursday, Oct. 24, 2019, in Lincoln, Nebraska.

The Phantom has arrived in Lincoln.

For the next two weeks, the Lied Center for Performing Arts’ main stage is transformed into 20th century Paris for the national tour of the iconic Andrew Lloyd Webber musical “The Phantom of the Opera.” The company will perform 15 shows from Oct. 23 to Nov. 3.

This tour is a reimagined production by famous theater producer Cameron Mackintosh, with revised scenic design, choreography and story tone. The updated, 1,500-pound, pyrotechnic-loaded chandelier is another one of the changes made to the original musical, which still runs on Broadway unaltered from its debut in 1988.

Two hours before the 2 p.m. matinee on Thursday, the Lied Center opened up its lobby and theater for a press event featuring cast and crew from “Phantom.” The center also provided inside looks at the show’s famous chandelier, sets and costumes.

Although the show gave its first performance Wednesday night, cast members have already taken time to explore the Lincoln area. Derrick Davis, who plays the titular masked antagonist, said he is excited to experience all the city has to offer during his time here.

“Being from a larger city, I imagine just like the cornfields and the horses and all those kinds of things [when I think of Nebraska],” Davis said. “So I went and found a cornfield. I went and found some horses. I'd love to go horseback riding. I'd love to go just walking around, and just meeting people and feeling the energy of the city is just my favorite thing, especially in the fall because the leaves are changing. Everything's cooling down. It's my favorite time of year.”

Davis, who was in the 2018 Broadway revival of “Carousel” and both the Broadway production and 2011 national tour of “The Lion King,” said “Phantom” was the first musical his parents took him to as a child, sparking his love for musical theater.

“There's just something about it,” he said. “It's magical in a way that plants a seed inside of humans and grabs hold and doesn't let go.”

Davis said the connection he feels with the show is conveyed in his performance of the Phantom — a role he loves to inhabit.

“When I get it right, and I work very hard to get it right every performance, I can feel the connection emotionally with the audience,” he said. “And when I have that connection with them, I feel like we're going on the journey together. So in that way, it's a different show every time I get on the stage, and I love that about it.”

After conversations with cast members, stage manager Lizz Bender took some time to talk about the signature sets and costumes in “Phantom,” putting extra focus on the gargantuan chandelier that hangs above the audience throughout the show. The chandelier features over 6,000 crystals, 20 LED globe lights and five different pyrotechnic effects. During a scene in the show when the chandelier falls from the ceiling, the massive light fixture drops at 10 feet per second.

The complicated technical nature of the production requires lots of manpower to operate, especially while on tour. Bender said the tour travels with 20 semi-trucks — 16 go to every city, and the other four “advanced” trucks only go to certain cities with backup props and set pieces.

The chandelier and sets are assembled at each venue in about three days. Bender said the production hires 75 to 100 local stagehands in each city to work alongside 19 traveling crew members to set up the show.

Bender said although “Phantom” has many technical elements to adapt to each venue, her crew has it down to an efficient science.

“It’s mostly the same as any tour,” Bender said. “The challenge is to move from city to city but make it look the same as the director envisioned each time. It’s my job to keep the show running smoothly and make sure people don’t notice anything if something goes wrong.”

Although this production boasts new technical elements, Davis and Bender said Lied Center audiences can still expect the classic story, score and costume design that made the show so beloved. However, Davis said longtime fans of the show may be pleasantly surprised with the creative paths this updated production takes.

“[They can expect] a more realistic and human and deep and grittier direction,” Davis said. “It's really a lot more honest in the way it's portrayed. And it's scarier, it's more fun. It's all the things just turned up to 10 for sure.”