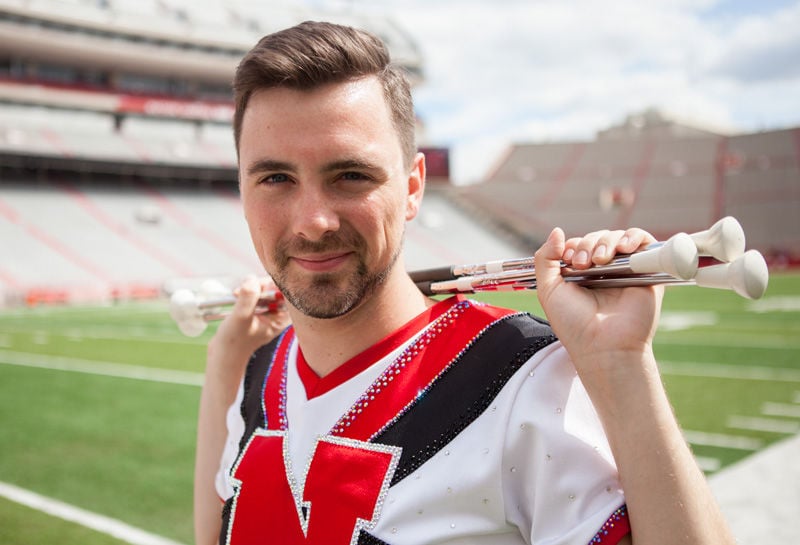 Trenton Haltom, a Sociology doctorate student at the University of Nebraska-Lincoln, stands in Memorial Stadium in Lincoln on September 2, 2016. 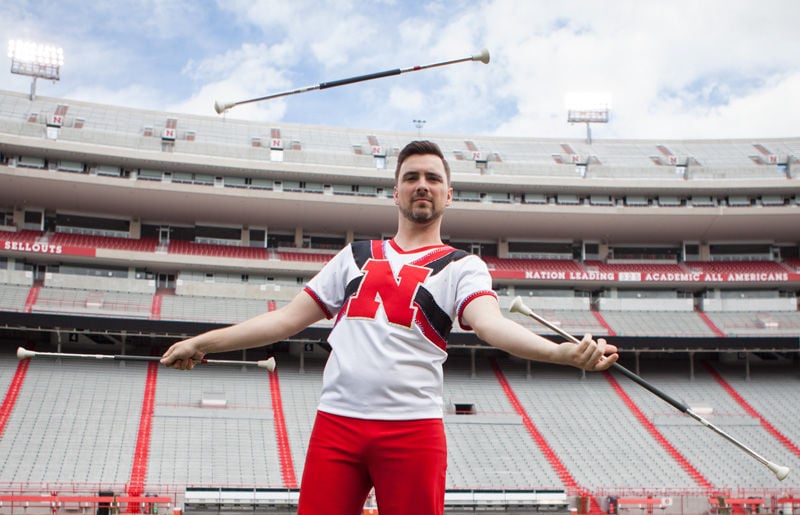 Trenton Haltom, a Sociology doctorate student at the University of Nebraska-Lincoln, stands in Memorial Stadium in Lincoln on September 2, 2016.

Trenton M. Haltom is one of only three male baton twirlers in the University of Nebraska-Lincoln’s history.

On game days, the 26-year-old PhD student in sociology can be found performing during pre-game and halftime shows alongside his fellow baton twirler, Hannah Kollmann, and the Cornhusker Marching Band.

Haltom said twirling has always been an interesting concept to him, but he didn’t begin practicing until the age of 16.

“I became interested in twirling because my mother used to twirl,” Haltom said. “I’d always been fascinated by it, but I was always told that boys don’t twirl.”

From the beginning of his career, Haltom had been vaguely aware of the stigma attached to male twirlers for deviating from traditional masculine characteristics.

Despite expectations to fulfill a stereotypical masculine role, Haltom’s interest in twirling never faltered. So much so that by the time he turned 16, he began taking private twirling lessons.

“At the time, I worked at an art supply store which had a gym connected to it,” Haltom said. “Whenever I was in the back, I’d tell my mom that I was taking inventory, when really I was taking twirling lessons.”

After many hours of practice, Haltom auditioned to twirl for the University of Oklahoma. The audition was a two part process and required contestants to first submit a video performance before being invited to audition live.

“After auditioning and receiving the news that I did not get the OU spot is when I told my family about my twirling officially,” Haltom said. “Though I think they knew, at least my mother anyway, I was (twirling) to some extent, they were largely unaware I was so passionate about pursuing it.”

Later down the road, that same passion enabled Haltom to finally achieve his goal of twirling for a university while studying at the University of Houston as a master’s student.

“In twirling it is a huge goal and accomplishment to be able to twirl for a university, so I had to wait until I was in a master’s program to do so,” Haltom said.

After completing his master’s at the University of Houston, he began working toward his PhD at UNL. Haltom later became the first male baton twirler to perform at the university since Bobby Foehlinger, who died in 2003.

“Something that Bobby used to always say was ‘love, learn, leave a legacy,’” Haltom said. “And I’d have to say that’s part of the reason why I’m here [twirling] is because of his legacy and his family’s legacy.”

As Haltom continued twirling, both his passion and his skill set began developing into more significant aspects of his life. This was not only due to how adamant he was about twirling, but also because of the stigmas which he wasforced to consider and operated under.

“There’s this stigma that boys shouldn’t participate [in twirling] because if they do, they’re going to be feminized and made fun of or even thought to be gay,” Haltom said.

“This idea that baton twirling is a feminine sport like figure skating or cheerleading is a huge part of why male twirlers are so rare.”

While the belief that gender should dictate whether or not a person can participate in certain activities may still resonate with a small percentage of individuals, Haltom’s fellow UNL baton twirler does not believe in gender-based stipulations.

“As long as your skill level and talent meet the expectations of your activity, your gender shouldn’t matter,” Kollmann said.

According to Haltom, male twirlers tend to draw more attention to themselves when they are seen performing simply because of their gender.

“Because there are so few of us, we become tokenized,” Haltom said. “We not only stick out as that one male twirler –because most people have only ever seen one– but we also set an example as if to say ‘hey, men can do this too.’”

While it’s true certain expectations are still held exclusively to both males and females, the pressure to adhere to specific rules based upon your gender has become much less constricting today.

“There is a lot more fluidity now because we are aware of what gender roles are,” Haltom said. “There’s more variance in what it means to be a man and what masculinity entails.”

While Haltom said he doesn’t believe he is changing anyone’s immediate idea or definition of masculinity, his baton twirling career does serve as a testament to how pliable gender based roles and expectations can be.

“I don’t necessarily think I’m changing people’s minds about masculinity,” Haltom said. “But my presence gets people to think ‘Oh yeah, I’ve never seen that before, but a guy can twirl for a major university and actually do it pretty well.’ The coolest thing to me is just being able to break down stereotypes and change people’s ideas.”